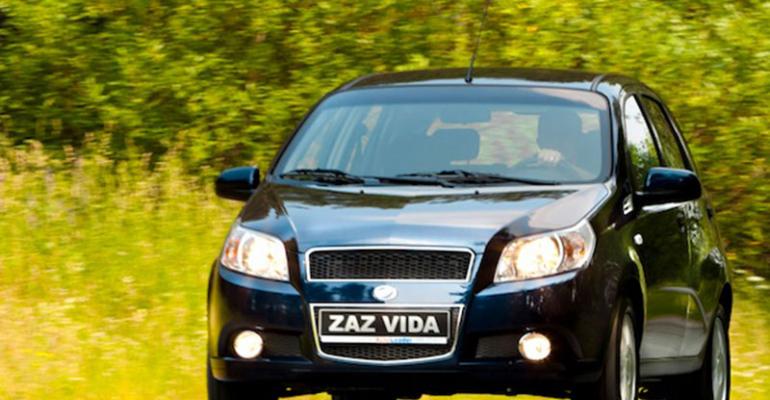 ZAZ, the country&rsquo;s only full-cycle automaker, manufactured only 10,622 cars in first-half 2014, compared with 252,476 in 2008, and may halt production in September because of parts shortages.

VIENNA – Between the violence in Eastern Ukraine that has drawn worldwide attention, as well as the adverse economic situation and devaluation of the local currency, Ukrainian automakers, importers and dealers face hard times.

ZAZ, Ukraine’s only full-cycle car manufacturer with its own stamping operation, may stop production at its plant in Zaporozhye in September because of problems with parts supplies. According to Tariel Vasadze, president of UkrAvto, which controls ZAZ, 30% to 40 % of parts were sourced from Eastern Ukraine. The automaker’s inventory of parts is running out.

“If nothing changes, production may end in September,” Vasadze tells Ukrainian news agency liga.net. “We are looking for replacement(s) at Chinese and other suppliers, but that affects production costs.”

However, production is small even when ZAZ is operating. The factory manufactured only 10,622 cars in first-half 2014, compared with 252,476 in 2008. The 2008 figure included a large portion of cars assembled from semi-knocked-down kits, but it still shows the large difference between the situation then and now.

In the past, Russia was the main market for the Zaporozhye-made cars. ZAZ offered cars under its own brand there, while the Forza was sold under the Chery brand by the Russian Chery importer.

Exports to Russia started to falter with the introduction of a Russian recycling fee in fall 2012. Now, as a result of the conflict between the two countries, it is questionable whether ZAZ will export any vehicles at all.

ZAZ’s main export market is Egypt. The Ukrainian automaker ships complete-knocked-down Lanos kits to the General Motors Egypt plant, which assembles and distributes the cars as the Chevrolet Lanos.

According to Vasadze, several government actions are harming the Ukrainian automotive industry. One example is the decision to eliminate the recycling fee introduced in 2013 as a way to protect local automakers.

“In April, under pressure from the two political parties Udar (and) Svoboda and the Cabinet of Ministers, the Verkhovna Rada (Ukrainian Parliament) on a wave of populism, canceled the recycling fee, which was at least some protection for domestic production,” he says.

In addition, the excise tax for all cars was increased while a special duty on imported new passenger vehicles with 1.0L to 2.2L gasoline engines, introduced in 2013, was reduced. Vasadze notes, however, that imported cars are not less-expensive now, which means consumers are not profiting from the government’s measures.

The situation is worse at Bogdan Motors, a CKD assembly plant with annual capacity of 120,000 cars. The automaker based in Cherkassy assembled only 1,999 cars in the year’s first half, with no cars whatsoever made in June.

In recent years, Bogdan assembled both an old Lada model from Russian-sourced kits under its own brand and the previous-generation Hyundai Tucson. Prior to the current crisis, the automaker failed to reach agreements on assembly of new models with its Russian and Korean partners.

The first victim of the Ukrainian crisis is Kremenchugsky Avtosborochny Zavod (KrASZ), a small SKD assembler of Geely and Ssangyong cars based in Kremenchug. Managing Director Nikolai Chernysh has told Ukranian media KrASZ is phasing out assembly operations this month.

This decision was made even though KrASZ assembled 7,349 cars through June, up 353% from like-2013, and Geely is among the leading brands on the Ukrainian market.

According to Chernysh, the shutdown at KrASZ is the result of the slumping market and the government’s decisions to cancel the recycling fee and reduce the special import duty for selected models.

‟The system of existing tariff rates makes import of cars more profitable than production,” Chernysh is quoted as saying.

Another small Ukrainian SKD assembler, Evrokar, managed to build 2,591 Skoda cars at its plant in Solomonovo in first-half 2014.

While the Ukrainian market is weak and exports to Russia face an unclear future, new agreements between Ukraine and the European Union signed earlier this year do not offer Ukrainian automakers immediate entry into the European market as most of their vehicles would not be competitive in the EU.

“The level of localization of our cars (required by the EU) should be 60%, instead of 51% as it is the case for deliveries to the (Commonwealth of Independent States) countries,” he says. ‟And this is a very high hurdle. It cannot be reached without large investments.“

While local automakers are struggling, importers also are facing problems. UkrAvto’s Vasadze, whose company not only controls the ZAZ car plant but also is an importer and retailer for several global brands, expects total Ukrainian car sales will range from 130,000 to 150,000 this year.

The Ukraine-EU agreement calls for the reduction of import duty, but that does not make imported cars less costly, as the deal keeps the duty at 10% this year and in 2015, then reduces it 1% every year. The rollback therefore has no real impact on new-car prices.

Oleg Nazarenko, managing director of VAIID, the Ukrainian association of car importers and dealers, tells local media the agreement allows local automakers to ask the government for greater protection in the form of increased import duties if more than 45,000 cars per year are imported from the EU. Imports from EU countries have exceeded that figure in recent years.

The standoff between Ukraine and pro-Russian rebels in Eastern Ukraine has resulted in minimal or no vehicle sales in the region. Several dealerships have been damaged and hundreds of new cars have been stolen by armed thieves.

The conflict also may curtail imports of Russian-made cars and light-commercial vehicles into Ukraine. They include not only Russian brands such as Lada, UAZ or GAZ but also Chevrolet, Hyundai, Kia, Peugeot and Volkswagen brands assembled in Russia and sold in Ukraine.