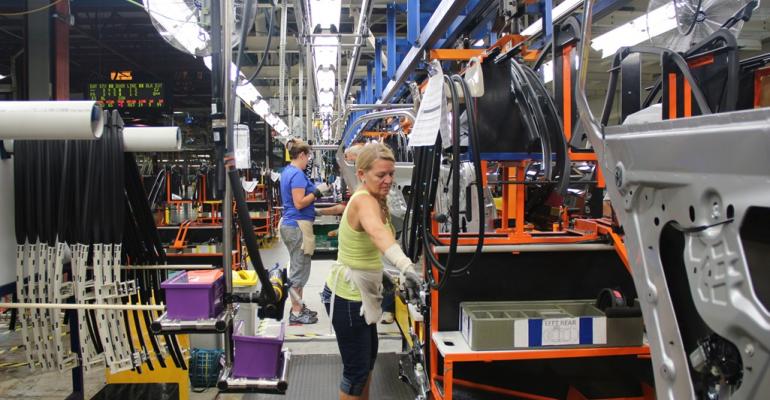 U.S. NAFTA Demands Not Deal Breaker for Canada, Depending on Return

One trade official says calls for 50% U.S. content could be met, depending on the price the Trump Admin. is willing to pay.

DETROIT – There may be frustration behind the scenes over President Trump’s negotiating stance on NAFTA, but publicly, at least, Canadian trade officials present a picture of calm and appear hopeful a better three-way trade agreement with the U.S. and Mexico will emerge from the struggle.

On Tuesday, bargaining wrapped up with major provisions unresolved, and although the next round of discussions is set for Mexico City Nov. 17-21, considerable doubt has been raised about the prospects of inking an updated agreement.

But despite the snags in talks over key issues and Trump’s early track record of blowing up deals – he already has pulled the U.S. out of the Paris climate-change accord, thrown the Iran nuclear deal back to Congress for repairs, abandoned Trans-Pacific Partnership talks and appears headed toward withdrawal from a trade agreement with South Korea, Canadian officials are maintaining an even keel, expressing confidence this week a new NAFTA can get done that benefits all parties, particularly where the key auto sector is concerned.

“There’s nothing that is being presented that would cause us to back away from the table,” Douglas George, consul general of Canada, tells WardsAuto at the Canadian Consulate’s Detroit office, just hours ahead of the adjournment of talks in Arlington, VA. “Canada is certainly here to negotiate, and what we’ve seen so far certainly isn’t going to cause us to walk away.”

Adding pressure to these talks is the accelerated pace, suggests George, a 20-year veteran of trade negotiations who led two years of bargaining in a successful Canada-European Union trade deal but isn’t directly involved in the NAFTA discussions.

“One thing is (the negotiations) are very compressed,” he says. “Normally you have much longer between rounds, so we’re seeing things move from the early stages to the middle stages very quickly.”

The goal going in was to deliver a deal by year’s end, ahead of 2018’s presidential election in Mexico and midterm Congressional elections in the U.S., but negotiators already have agreed to extend talks into first-quarter 2018.

That should come as no surprise to George, who acknowledged earlier the end of the year deadline would be tough to meet, saying, “Canada is certainly willing to work toward that, but I don’t know if that’s actually a realistic date.”

The list of demands includes a U.S. bid to increase North American content requirements on vehicles crossing borders tariff-free to 85% from 62.5% today. Believed to be more contentious is the Trump Admin.’s position to require U.S. content of at least 50%, a provision that could be a deal-breaker for Mexico.

“I can’t say I’ve ever seen that before in trade negotiations,” George says of the U.S.’s content demands. But he doesn’t rule out Canada accepting the target. “Now we’re into the negotiation phase. What is the U.S. willing to pay to get some of the things they’re looking for?”

Many have criticized the Trump Admin.’s “America First” proposals to require higher U.S. content in vehicles, as well as his threats to abandon the trade pact altogether, suggesting such moves could harm the U.S. economy more than it helps.

Passenger-vehicle imports from countries outside of NAFTA are subject to a 2.5% tariff, so critics contend that if the cost to locate more production in the U.S. and the NAFTA region is too high, automakers simply will choose to pay the tariff and import more vehicles from low-wage countries.

A study done by the Boston Consulting Group for the Motor & Equipment Manufacturers Assn. says 50,000 U.S. jobs would be at risk if the U.S. pulls out of NAFTA or otherwise tweaks the pact in ways that make it a better business case for automakers and suppliers to source parts and vehicles elsewhere, rather than build plants in the U.S.

“If anything, that’s a conservative amount,” he tells WardsAuto. “You take not only the direct effect of NAFTA but the signal that the U.S. is pulling away from its agreements (and) that it’s not a reliable trade partner, I think you could see an even bigger loss.”

To some extent, calls for a higher percentage of U.S. content could be met relatively pain-free, if the deal broadens its rules-of-origin requirements to credit soft content such as marketing, advertising and engineering that already emanates from the U.S., but currently is not counted under NAFTA, Sands suggests.

“If you have more that’s in-formula, then the percentage becomes less onerous,” Sands says, noting, “Increasing the number has an appeal for the Trump Admin. If we end up with a number (on U.S. content) that is higher, it will be a banner headline for why the new deal is better than old NAFTA.”

All sides agree NAFTA is in need of updating, in part because technology has advanced significantly since the trade pact was enacted 23 years ago.

Ann Wilson, senior vice president-government affairs for MEMA, said in July the group supports modernizing NAFTA, but “there are other things you can do without disturbing that (local-content) percentage.”

Canada’s George says NAFTA was groundbreaking in 1994, but “it is looking a bit tired nowadays. There’s a lot we can do to modernize. (But) in Canada we’re trying to do it more with imagination – how we can move forward – rather than trepidation.”

Sands says the compressed timetable and proposed sunset clause that would require all three countries to renew the pact after five years or allow it to expire automatically may mean this is just round one when it comes to NAFTA revisions.

“I think NAFTA 2.0 is going to be a skinny NAFTA 2.0,” he says. “I don’t think it can be as comprehensive. But we’ve set ourselves on a course that even if NAFTA 2.0 falls short of everything we want, we can come back to it. That’s a very positive step.”

Sums up a hopeful George: “We’re committed to improving NAFTA. We don’t want to move backwards.”