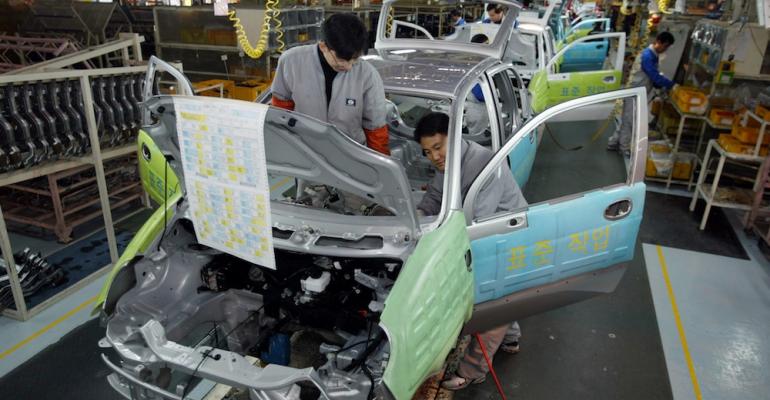 Despite GM Korea suffering heavy financial losses and production and sales volumes shrinking, workers are planning to go on strike to back their demands for a monthly wage increase of 154,883 won ($133) and a bonus of five months&rsquo; pay.

The vote ended Friday, July 7, with 69.4% of GM Korea’s 15,000 members of the Korean Metal Workers Union voting to authorize a walkout.

The union had filed for arbitration by the National Labor Relations Commission on July 5, stating wage negotiations with management had broken down after several rounds of negotiations that began May 23.

Under Korean labor law the union must wait 10 days from the arbitration application date before it can strike, so the workers must stay on the job at least through Thursday, July 13. However, the union reports it has called for a strike strategy meeting on Tuesday, July 11. It is expected to announce a strike-date target and whether it will be a full strike or rolling partial strikes that limit the hours of production on various specified days.

Last year the partial-strike strategy was held on 24 days and cost GM Korea some 3 trillion won ($2.6 billion) in production losses.

With GM Korea suffering heavy financial losses and production and sales volumes shrinking, workers are planning to go on strike to back their demands for a monthly wage increase of 154,883 won ($133) and a bonus of five months’ pay.

Further, perhaps inspired by the easy success of South Korea’s new pro-left president Moon Jae In in winning the June election, the union is demanding expensive and complex non-wage reforms, too.

Among other things the union wants a formal role in planning and a guaranteed production quota set for each of GM Korea’s three vehicle assembly plants. It also wants the current work schedules reduced to two straight 8-hour shifts, with no work beyond midnight.

The company says it refuses to negotiate anything but wages. Reportedly it has offered the union a 50,000 won ($43) monthly increase and a 9 million won ($7,800) bonus, which was flatly rejected.

It is reported that GM salaried and unionized workers, and union and government officials, were stunned by GM Korea CEO James Kim’s sudden announcement July 3 he was resigning to take a paid CEO job with the American Chamber of Commerce in Korea.

Kim’s departure, and the labor union’s strike intention, could foreshadow a decision by parent General Motors to dump its money-losing, strike-ridden Korean affiliate. GM CEO Mary Barra has been ordering withdrawal of GM plants and investments in other countries and regions where costs were deemed too high, the labor and regulatory climate was unfavorable and losses were ongoing.

Before announcing his resignation, Kim sent a warning note to GM Korea workers cautioning the parent company was reassessing its operations all around the world.

The KMWU has been shown data that labor costs at GM Korea are double that of any other production hub in GM’s international operations (U.S. and Europe excluded). The union also has seen data indicating GM’s risk exposure in Korea is very high. According to the data, GM Korea labor costs have increased 140% in the past 10 years, compared to 40% in the U.S.

GM Korea has logged huge net losses over the past three years, which many analysts say may cause GM to end South Korean operations.

Concerns about GM’s possible pullout from South Korea have been sizzling for at least the past five years. Yet KMWU leaders responded by forming a committee to try to thwart any moves by GM to shutter any of the plants – or unload the company.

GM holds 76.9% of the stock of GM Korea, either directly or through its subsidiary operations. Stock held by Korea Development Bank, which owns roughly 17% of the shares, is now up for purchase, according to reports.

A possible obstacle to a complete wind-down of operations in Korea is the fact that GM Korea does a sizable business with GM China, feeding completely knocked-down units to that market for assembly as Buicks.