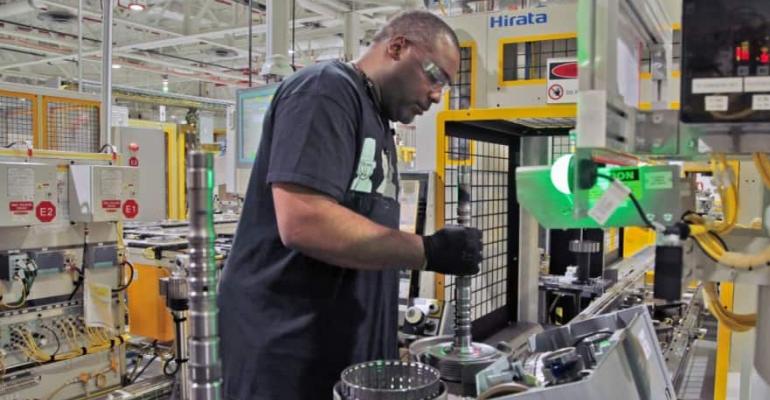 Union members returned to work at General Motors after a 40-day strike; the union reached a tentative settlement for 55,000 workers at Ford; and UAW President Gary Jones – targeted in a federal corruption investigation – announced he was taking a leave of absence.

For the UAW, Halloween Week was a week to remember.

Union members returned to work at General Motors after a 40-day strike; the union reached a tentative settlement for 55,000 workers at Ford that included $6 billion in new investments; and the UAW’s president, Gary Jones (below, left) – one of several high-ranking union officials targeted in a federal corruption investigation – announced he was taking a sabbatical.

Jones maintained a low profile during the negotiations at GM but said he was taking a leave of absence as UAW members at Ford prepare for what could be a difficult ratification vote and the union’s contract with FCA – which last week announced a 50-50 merger with French automaker PSA – remains unfinished.

In announcing his decision to take a leave of absence, Jones says: “The UAW is fighting tooth and nail to ensure our members have a brighter future. I do not want anything to distract from the mission. I want to do what’s best for the members of this great union.”

Rory Gamble, head of the UAW’s Ford Dept., will serve as acting president.

Jones has been under increasing pressure after being linked to the scandal that has engulfed the union over the past two years and appears to have lost the confidence of fellow executive board members since the FBI searched his suburban Detroit home.

Jones has not been charged with any crimes. In recent court filings, however, federal prosecutors and U.S. Department of Labor officials reported finding $30,000 in cash and golf equipment purchased with money from the UAW’s treasury in Jones' garage.

In addition, two of Jones’ top aides, Vance Pearson, who replaced Jones as head of UAW Region 5 covering the western U.S., and Edward Robinson, head of the union’s Political Action Committee in Region 5, face federal charges of embezzling money from the union’s general and political funds.

Pearson took a leave of absence from the union’s executive board in September after being charged by federal prosecutors in Detroit. In court documents, prosecutors say Robinson met with Pearson and “UAW Official A,” who has been identified by several sources as Jones, in an abortive effort to cover up the embezzlement, which included writing phony invoices to make it look as though the money was used for legitimate union business.

During the meeting, Robinson, Pearson and “Official A” discussed destroying documents, using “burner” phones to evade government surveillance and obtaining employment for one of Robinson’s relatives to ensure his silence, according to federal court filings.

Gamble, the union’s new acting president, says the UAW will continue fighting for its members: “Together throughout the last few months, we’ve achieved substantial victories for UAW members and we know that we have more work to do. We want better health care coverage, better salaries and respect for our work. That will not change.”

Gamble will oversee ratification of the union’s tentative contract with Ford, which will allow the company to close a V-8 engine plant in Romeo, MI, while investing $6 billion in other facilities, including an underutilized assembly plant in Flat Rock, MI, and a stamping plant in Buffalo, NY,  that was in danger of closing.

Union members will vote on the tentative Ford agreement over the next two weeks. "It’s their contract and it’s in their hands now,” UAW spokesman Brian Rothenberg says, adding the ratification vote will wrap up Nov. 15.

The investment package in the tentative agreement includes a commitment of $400 million to a transmission plant in Sterling Heights, MI, which is expected to pick up the 600 employees displaced by the end of V-8 production in nearby Romeo. Ford also promises new investment in the nearby Sterling Heights axle plant and Livonia, MI, transmission plant.

The tentative agreement includes incentives for senior employees to retire. Eligible workers would receive a $60,000 bonus at retirement. An unlimited number of production workers could retire with the bonus but only 200 skilled trades employees are eligible for the program, the union says.

The tentative Ford agreement includes 4% lump-sum bonuses in the first and third year of the agreement and 3% general wage increases in the second and fourth years. Health-care benefits will remain unchanged, Rothenberg says.

The UAW contract negotiations with FCA will pick up steam in mid-November, pending the outcome of the Ford ratification vote.