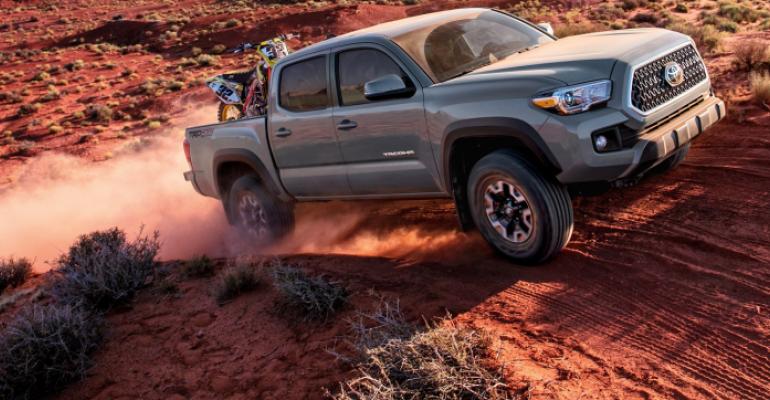 The automaker also saw a slight decline in volume in calendar 2018, with deliveries falling 0.3% to 2.427 million units as record light-truck sales couldn’t offset declines in cars.

“Where we stand today is almost exactly where we were a year ago,” Jack Hollis, group vice president-Toyota Div. for Toyota Motor Sales U.S.A., tells media on a conference call of an expected U.S. seasonally adjusted annual rate of 17 million. “Because of that, we anticipate for Toyota Motor North America that the North American industry sales are going to be relatively stable over the next three years, but with some cyclical yet modest decreases. We expect to pick up market share during these cycles.”

Toyota officially has called for a 2019 SAAR in the upper 16M range, but Hollis says it could go higher should issues around tariffs get resolved and so long as tailwinds (fresh product, low unemployment, strong consumer confidence) stay ahead of headwinds (possible tariffs, rising interest rates).

Posting strong results for Toyota last month were the RAV4 midsize CUV (up 18.8%) and the Corolla lineup (up 27.4%). The Corolla sedan posted a 28.4% increase and the new Corolla hatchback was up 14.5% over year-ago. The current Corolla sedan is being sold down as Toyota prepares for the launch of the next-generation model this year.

Other than a 4.6% increase by the Avalon, redesigned last year, all other Toyota-brand cars fell in December, including the Camry and Prius, which each posted losses of 33.0%.

The UX 250h hybrid variant, whose gas-electric powertrain is a 2019 Wards 10 Best Engines winner, goes on sale this month in the U.S.

For the year, the Toyota Div. sold 2.128 million units, just shy of 2017’s 2.129 million, and Lexus delivered 298,310 vehicles, a 2.2% drop and not enough to place it ahead of German marques BMW and Mercedes, which were both leading Lexus through November.

While Toyota has a goal of raising RAV4 hybrid sales for the new-generation model on sale this March, Hollis says an early stop in production of the outgoing model, plus low gas prices, brought about the 5.1% decline in 2018.

The RAV4’s 2018 sales, which includes 3,781 units of the new fifth-generation model that went on sale in late December, will make it the top-selling non-pickup light truck in the U.S. this year.

Another win for Toyota is the Tacoma, whose 245,659 sales will make it the No.1-selling model in Wards Intelligence’s Small Pickup segment in 2018. Toyota says the truck’s sales rose 24.0% from last year and 2018 was its best year ever by volume.

The Camry, Toyota’s perennial best-seller, for the second consecutive year was in second place among Toyota models, with 343,349 deliveries down 11.3% from 2017.

Calendar 2018 saw a further weakening of the Prius hybrid lineup. Sales of Priuses, which Toyota once thought could do Camry-like volume before gas prices fell and Americans flocked to crossovers, dropped to 87,590 units from 108,663 in 2017.

Hollis says fleet sales again made up less than 10% of Toyota’s U.S. sales for the calendar year, noting 55% of its 2018 fleet mix was sedans as dealers are asking for every utility vehicle the brand can send them.

Toyota plans to launch 31 new, redesigned or refreshed models in the U.S. between now and 2021. One of those is a new-generation Supra sports car, debuting at the 2019 North American International Auto Show this month.

Despite falling sales of other sports cars, including the Chevy Camaro and Ford Mustang, Hollis is undeterred.

“Not (every product is) always a business case – sometimes it’s an emotional case,” he says of bringing the Supra back. “It’s a decision made by a CEO of a company (Akio Toyoda) who loves vehicles and loves driving.”