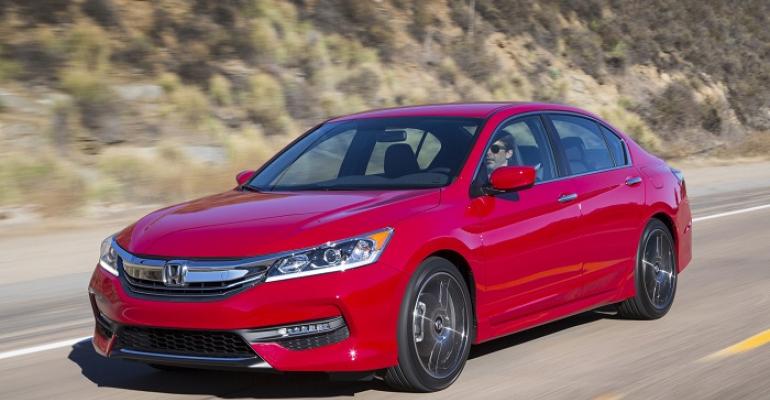 <p><strong>Honda&rsquo;s Accord one of few cars in positive territory in May.</strong></p>
Industry News

Toyota, Honda and Nissan Fall in May

Toyota, Honda and Nissan’s U.S. sales declined in May, as all continued to suffer losses on the car side but showed strength in light trucks.

While Toyota-brand sales were flat, down 0.5%, Lexus slipped 8.6%. WardsAuto still tracks the discontinued Scion brand, which looks to be nearly out of inventory as 10 sales were recorded last month, down 99.9% from May 2016.

Across all Toyota brands, cars dropped 17.3% and light trucks increased 7.9%.

The Toyota Div.’s light-truck lineup had a best-ever May, as did the RAV4 midsize CUV and Highlander large CUV, Toyota says.

RAV4 sales through May stood at 150,646, an 8.7% increase and overtaking the Camry midsize sedan and Corolla compact car year-to-date.

Toyota has a goal of selling 400,000 RAV4s in the current calendar year, and brand officials have said the RAV4 may become its best-selling model this year or next.

The RAV4 was Toyota’s best-selling model in May, topping the usual No.1 Camry sedan for the fifth time ever, with the first time occurring just last August.

The Prius continues its long decline since the current-gen went on sale early last year. The Prius, which includes the original liftback body style, new Prime plug-in hybrid variant and aged V wagon, fell 22.0% last month. Sales of the 3-car lineup were down 13.6% through May.

The Lexus brand continues to suffer steeper car losses than Toyota, with Lexus cars falling 23.8% in May and declines registered among every model.

Lexus utilities rose 3.2% as a group, with the NX midsize CUV and LX large SUV offsetting losses with the RX and GX models. The NX posted a best-ever May result of 5,009 units, good for a 19.3% jump.

Jack Hollis, the newly installed group vice president-Toyota Div., indicates the automaker is ready to meet even greater demand for light trucks, noting inventory of the vehicle type “remains at healthy levels for our customers during the summer buying season.”

On the light-truck side, Honda posted a 1.4% increase thanks to 9,533 HR-V subcompact CUV deliveries, a monthly record for the 2-year-old vehicle and a 23.8% jump from year-ago.

At Acura, a strong month for the RDX midsize CUV (8.3%) and the TLX midsize sedan (4.1%) nearly balanced 38.0%-plus declines of the ILX and RLX cars, as well as the 1.7% dip of the MDX large CUV. Despite a recent refresh, the MDX is down 7.6% through May. Acura has blamed a lack of inventory and intense competition for the MDX’s falloff this year.

Nissan sales slipped 1.1% on a DSR basis in May, with an 11.6% jump in light-truck deliveries just shy of counteracting a 12.6% decline in car sales.

The Rogue midsize CUV continues to exceed the Altima’s monthly deliveries this year, racking up 32,533 sales in May, which Nissan says is a record for the month and good for a 13.9% increase.

Other major movers for Nissan last month, and in positive territory, include the refreshed Armada large SUV (200.7%), the Maxima fullsize sedan (13.5%) and the Leaf electric vehicle (36.5%).

The new Titan fullsize pickup tallied a 414.0% jump from year ago, albeit on relatively low monthly volume of 4,937.

Infiniti sales climbed 10.9% from year-ago with gains at half the brand’s models.