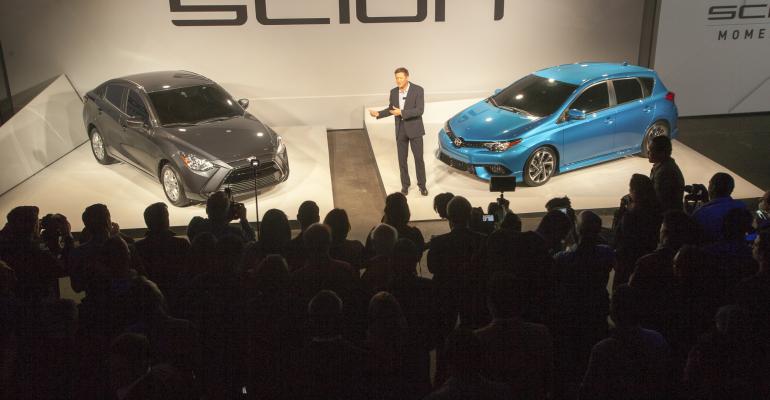 The iA, iM and FR-S will become Toyotas, while the tC coupe is being discontinued and the forthcoming C-HR will be badged a Toyota next year upon its release.

The Scion brand, which began as an experiment to attract young car buyers to Toyota 13 years ago, is being killed.

Toyota announces today the U.S.-only Scion will cease to exist this year and most existing Scions will transition to the Toyota brand starting in August. The tC coupe is being discontinued that same month, while the upcoming C-HR small CUV will be badged a Toyota. It was slated for release as a Scion early next year.

“This isn’t a step backward for Scion; it’s a leap forward for Toyota. Scion has allowed us to fast track ideas that would have been challenging to test through the Toyota network,” Jim Lentz, CEO-Toyota Motor North America says in a statement.

Scion acted as a funnel to bring new buyers to Toyota, Lentz says, with 70% of Scion buyers never having owned a Toyota-made vehicle. But now he says the Toyota brand can sufficiently attract the younger buyer with its switch to more aggressive styling and high-tech features.

The death of Scion isn’t a shock as the brand has struggled to regain its initial success, although it does come as the brand appeared to be mounting a comeback.

Scion hit its peak in 2006, selling 173,034 units in the U.S. as Americans clamored for its original lineup: the xA subcompact, tC coupe and funky xB box, the latter of which came to symbolize the brand and proved a hit with older buyers, as well.

But the xD replaced the xA, and the xB was redesigned in favor a bigger, less distinctive model. Perhaps the biggest culprit in Scion's downfall came with the recession, upending younger consumers buying power. Scion hasn’t had a 6-figure sales year since 2008 when 113,904 units were delivered, WardsAuto data shows.

And the brand again seemed to be renewed with last summer’s launch of two new models, the Mazda2-based iA subcompact and iM compact hatchback, the latter a U.S. version of the highly regarded Toyota Auris sold in Europe.

Thanks to the debut of the new models, in September 2015 Scion saw its first positive sales month since May 2013.

But while the new models boosted brand deliveries in the fourth quarter, Scion still finished 2015 3.2% below 2014 at 56,167 due to declining sales of its existing lineup, which includes the 5-year-old second-generation tC and the FR-S.

Scion last year discontinued the xB, but new brand Senior Vice President Andrew Gilleland was hopeful the forthcoming C-HR would replace it as a must-have product.

Toyota says Scion’s 1,004 U.S. dealers, nearly all of whom have a Scion showroom adjacent to their Toyota showrooms, will continue to service the brand’s models.

Meanwhile, the 22 Scion-only Toyota Motor Sales U.S.A. employees will have the opportunity to transition to jobs at Toyota in Torrance, CA, the automaker says.