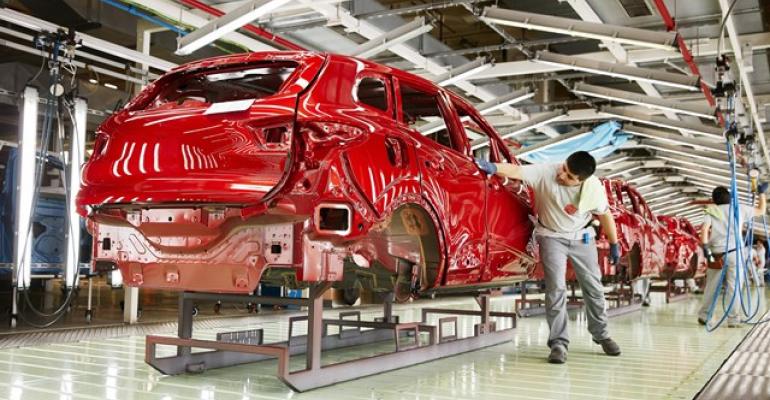 Renault has spent the biggest portion of its &euro;600 million 2014-2016 investment program on retrofitting the Palencia plant to the Common Modular Family platform on which the new Megane, Kadjar and Nissan Pulsar models are built.

MADRID – Renault gathers the first fruits of its €600 million ($638 million) Spanish investment program for 2014-2016 by setting a production target of nearly 300,000 units of production at its Palencia plant next year.

The automaker anticipates production of 284,000 units of the Kadjar CUV and fourth-generation Megane this year at the factory 150 miles (240 km) northwest of Madrid. That would fall just short of the record output of 288,000 units in 2004 – but is more than double the 134,000 built at Palencia last year.

The plant is operating on three shifts, so achieving 300,000 assemblies, or 1,350 a day, would require weekend shifts. Addition of the third shift in September brought the size of the workforce at Palencia to 4,235, more than double the 1,932 employed in September 2014.

Vicente de los Mozos, CEO of Renault Spain and the French automaker’s global director for assembly operations, admits the Palencia plant has more workers under temporary contracts than before. “But with such a policy it has been possible to avoid layoffs and idling programs,” he explains.

The Palencia plant since 1995 has assembled more than 4 million of the 6.6 million Megane models. The latest generation was unveiled at September’s Frankfurt auto show.

The biggest portion of Renault’s €600 million investment program has been spent on retrofitting the Palencia plant to the Common Modular Family platform on which the new Megane, Kadjar and Nissan Pulsar models are built. That includes the acquisition of 356 new robots, giving the plant a total of 997, of which 874 are used in welding operations.

Palencia is the third Renault plant with a so-called light cab station where the paint quality of 20 vehicles is closely examined each week. The €400,000 ($425,000) installation uses technology transferred from Daimler under an agreement between the German automaker and the Renault-Nissan Alliance. Light cabs also are in place at factories in Mauberge and Douai, France.

The fourth generation of the Megane will be offered in hatchback and GT sport hatchback versions coming to market in January, followed by a Sport Tourer version. Renault will not offer the coupe that was part of the previous-generation Megane range.

The Megane hatchback will be available with a 100- or 130-hp gasoline engine or 90-, 110- or 130-hp diesel powerplant. A 165-hp gas engine joins the lineup later in 2016. The GT version will be offered with a 205-hp gas engine with robotized 7-speed transmission as well as all-wheel drive. Multi-sense, head-up display and other advanced technologies will be available.

Renault is considering building a hybrid diesel version of the new Megane at the Palencia plant, one of four in Spain. One in Valladolid manufactures engines, another in Valladolid will assemble a record 230,000 Captur models this year in addition to Twizy electric vehicles and a factory in Seville is on track to build more than 1.3 million transmissions in 2015.