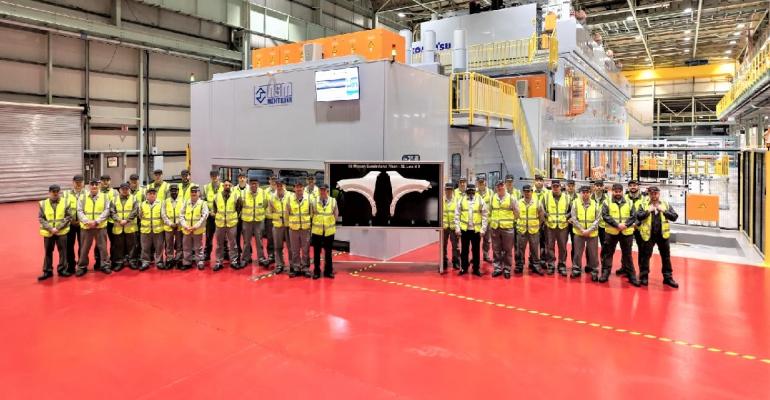 The £52 million ($67 million) line is part of the automaker’s ramping up of preparations for its next-generation Qashqai CUV, which has been built at Sunderland since 2006.

Nissan signals it is keeping faith in its U.K. car production post-Brexit by unveiling an XL press line at its Sunderland manufacturing plant.

The £52 million ($67 million) line is part of the automaker’s ramping up of preparations for its next-generation Qashqai CUV.

The press weighs more than 2,000 tons and has taken 18 months to install. It is part of Nissan’s £400 million ($516 million) overall investment in the new model entering its third generation.

Nissan’s investment in the press includes a recycling system to segregate and process scrap material and upgrades to the existing blanking line which will supply flat blanks – the sheets of metal that are ready to be stamped – to the XL press. It can form more than 6.1 million vehicle panels a year.

The first specially commissioned panels on the press are produced at a ceremony led by Nissan chief operating officer Ashwani Gupta, who says: “When the first Nissan Qashqai rolled off the line in Sunderland in 2006, it created the crossover segment. Designed, engineered and made in the U.K., and more than 3 million vehicles later, it remains the benchmark.”

This month also marks the 10th anniversary of the first Juke to roll off the line in Sunderland. The second-generation model has been built exclusively in Sunderland since October 2019.

Nissan has pledged a total of £1 billion ($1.3 billion) in investment in the plant over five years and has received support from the U.K. government’s Department for Business Energy and Industrial Strategy.