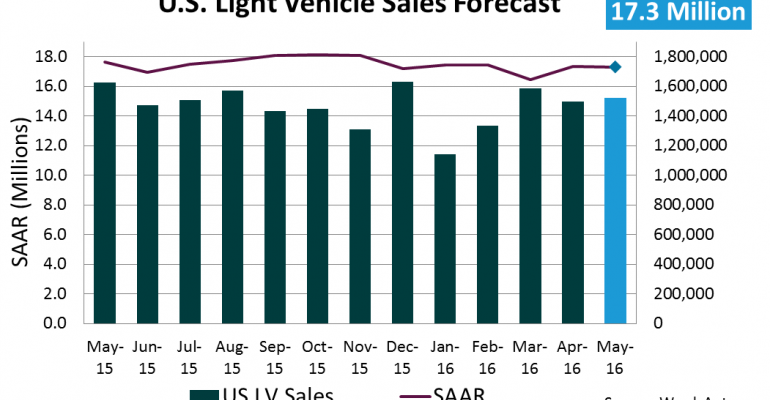 May sales are expected to outpace year-ago on a daily sales basis, even with one less weekend.

A WardsAuto forecast calls for U.S. automakers to deliver 1.52 million light vehicles in May.

The report puts the seasonally adjusted annual rate of sales for the month at 17.3 million units, slightly above the 17.1 million SAAR from the first four months of the year, but below the 17.6 million SAAR reached in May 2015.

The reporting period for the month began May 3, leaving just four weekends in the month this year versus five in 2015. The forecast also factors in a drop in the most recent Consumer Expectations Index by the Conference Board and a decline in April’s housing starts and completions compared with year-ago.

Inventory is expected to fall to 3.85 million units from 3.89 million at the end of April, leaving automakers with a 61 days’ supply, down from April’s 70 and up from year-ago’s 56.

WardsAuto is projecting General Motors’ DSR to fall 8.5%, as both retail and fleet deliveries decline from prior-year. The automaker is forecast to sell nearly 248,000 cars and light trucks this month, accounting for 16.3% of sales compared with 18.0% last year. May sales will bring the 5-month total to 1,191,000 units, 4.4% below the same period in 2015.

The forecast calls for FCA’s sales to fall just below 199,000 LVs, ending a 73-month streak of surpassing prior-year’s volume. Daily sales would have to jump more than 8.3% to beat the 200,794 LV sales from May 2015. Although heavy incentives and other strategies could make that goal possible, WardsAuto expects the automaker’s DSR to increase 7.3%.

Honda is forecast to post a 3.6% DSR gain to projected deliveries of just under 148,000 units.

Projected May LV sales would bring the industry to 7.08 million units, a 1% improvement from same-period 2015. WardsAuto currently is forecasting 17.7 million LV deliveries for full-year 2016.