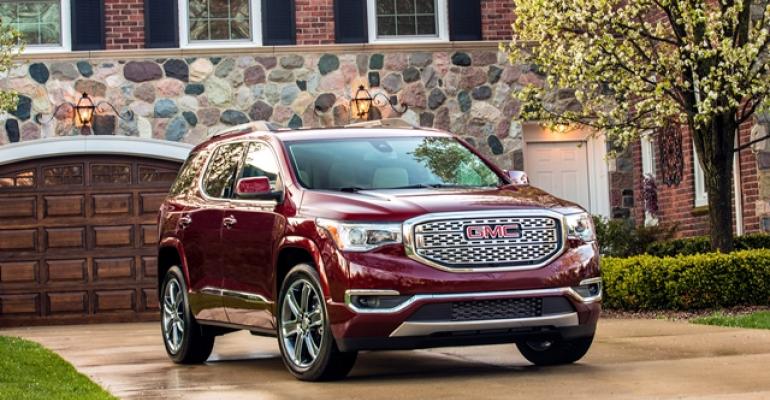 GM dealers delivered 237,364 light vehicles in May, compared with 240,450 cars and trucks in the same period last year, which had one less selling day, according to WardsAuto data.

General Motors points to a pullback in deliveries to rental-car companies, as well generally weaker demand industrywide, as the key culprit behind a 5.2% decline in daily sales last month.

GM dealers delivered 237,364 light vehicles in May, compared with 240,450 cars and trucks in the same period last year, according to WardsAuto data. There were 25 selling days for the industry last month vs. 24 year-ago.

The automaker says retail demand remained strong in a month where crosstown rival Ford outsold it for the first time since March 2016. GM executives remain optimistic its sales will rebound because it is building up stocks of CUVs, or car-based crossovers, consumers demand.

“As we see the industry shift to more crossovers, we are extremely well positioned to take full advantage of this dynamic,” says Kurt McNeil, vice president-U.S. Sales Operations at GM.

“We expect these launches will enable us to continue gaining retail share as we introduce more all-new compact and midsize crossovers than anyone else, including the all-new GMC Terrain, Chevrolet Traverse, Buick Enclave and the Regal TourX,” he says in a statement.

The Buick brand enjoyed brisk demand with sales up 23.4% to 20,077 from 15,625, as the newly redesigned LaCrosse large sedan, Envision 5-passenger CUV and Encore compact CUV delivered positive sales in the month.

Cadillac also saw improved showroom traffic last month with deliveries growing 4.8% to 13,211 from 12,099. The prime mover was the XT5 luxury 5-passenger CUV, which remains fresh in the market after last year’s launch. Its sales doubled to 5,752 from 2,719.

Through the first five months of 2016, GM sales were down 1.1% to 1.17 million units from 1.18 million year-ago. The automaker says it could make additional production cutbacks if demand weakens after deciding to slow output earlier this year at a number of U.S. assembly plants to cope with what appears to be the end of a 7-year hot streak for the industry.

However, GM Chief Economist Mustafa Mohatarem says the market continues to show resiliency and 2017 should be another banner, if not record, year for auto sales.

“The U.S. economy is operating at near full employment levels, wages are rising, interest rates and fuel prices remain low and consumer confidence remains high,” he says. “The decline in total sales is primarily due to the industry’s pullback from daily rental sales. Although total sales are running below our expectations, we anticipate retail vehicle sales will remain strong.”