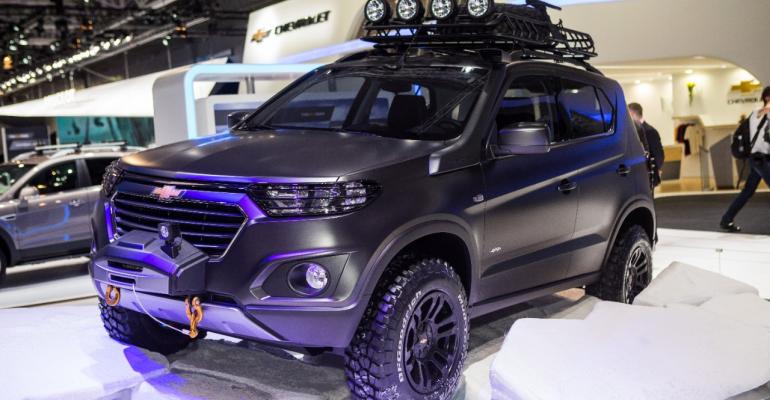 General Motors&rsquo; Russian joint venture, GM-AvtoVAZ, is in negotiations with Russian authorities, particularly on opening a credit line needed to fully finance expansion of the plants where the current-generation Niva is built.

ST. PETERSBURG – Production of a new-generation Chevrolet Niva compact CUV in Russia takes a step forward as Sberbank, Russia’s largest bank, agrees to underwrite nearly half the cost of the project.

General Motors’ Russian joint venture, GM-AvtoVAZ, is negotiating terms of the agreement with Russian authorities, particularly the opening of a credit line needed to fully finance expansion of the plants where the current-generation Niva is built.

The project as planned includes a car-body assembly facility and a new engineering and logistics center in Togliatti in the Samara region, 400 miles (640 km) south of Moscow. The GM-AvtoVAZ  plant and an AvtoVAZ facility produce the current-generation Niva there.

Nikolay Merkushkin, governor of the Samara reqion, says the cost of the project is nearly RR21.6 billion ($379 million). Direct state support, including a loan guaranteed by state-owned Sberbank, is expected to be total RR10 billion ($171 million), while GM-AvtoVAZ is to provide RR6.6 billion ($113 million).

The JV is in negotiations to secure a loan for the remaining RR5 billion ($84 million), possibly from Sberbank or another state-owned bank such as Vnesheconombank.

Production of the new Niva is expected to begin by year-end and eventually reach 120,000 units annually, with an undetermined number designated for export to former Soviet Union states.

GM-AvtoVAZ displayed a new-generation Niva concept at the 2014 Moscow auto show. The CUV was expected to go on sale in 2016. But Russia’s developing financial crisis, marked by the ruble’s falling value and the effects of Western economic sanctions, prompted the JV to suspend the project.

According to the Association of European Businesses, Niva sales in Russia in 2016 amounted to 29,844 units, 4.9% less than prior-year. From January-April of the current year sales grew 2% to 9,526 units. Despite relatively small sales volumes, the Niva is the third best-selling utility vehicle in Russia behind the Hyundai Creta and Renault Duster.

GM-AvtoVAZ says the new-gen Niva will contain a high level of localization and will attract domestic parts suppliers.