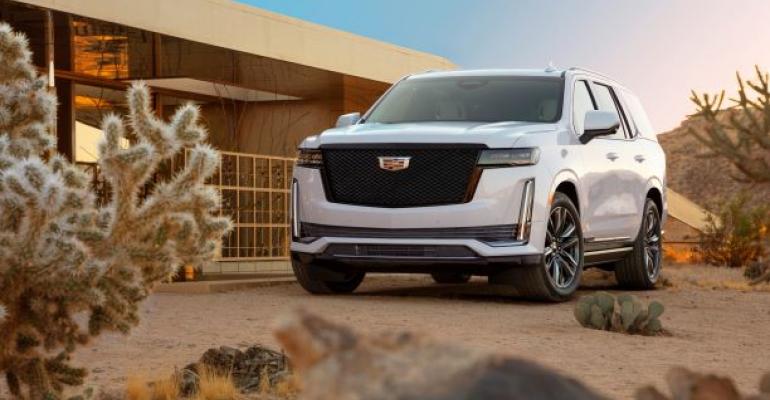 Cadillac posted its worst result in Russia in at least 13 years in 2019, when it delivered 975 units, down 17.1% from prior-year, according to Wards Intelligence data.

ST. PETERSBURG – General Motors has almost nowhere to go but up in Russia, where it plans to launch the fifth-generation Cadillac Escalade and several Chevrolet models in a bid to at least double its current sales.

The Escalade large SUV will go on sale in 2021, with the exact date to be announced later this year, Ciprian Suta, managing director of GM Russia, tells Autonews.ru.

The new-generation Escalade will be offered with a 6.2L, 426-hp gasoline engine and a 3.0L turbodiesel making 281 hp. The latter is almost identical to the U.S.-built powerplant that won a Wards 10 Best Engines and Propulsion Systems award in 2019.

Russian analysts predict the Escalade will be the major driver of GM’s Russian sales.

GM announced earlier it would begin selling the Cadillac XT5 and XT6 midsize CUVs and the XT4 compact CUV in Russia early this year.

The automaker intends to halt local sales of sedans such as the Cadillac CT4 and CT5 within the next few months because of low demand.

GM’s Chevrolet range in Russia will continue to include Traverse midsize CUV, fullsize Tahoe SUV and Camaro coupe. A new Tahoe is due out in 2021.

The automaker has no plans to revive sales of its Corvette sports car in Russia after having sold no more than a dozen units annually in past years.

All Cadillac and Chevrolet models sold in Russia are imported from the U.S. Industry sources say GM decided against importing China-built Cadillacs into the country.

GM is abandoning its manufacturing presence in Russia. The company said in December it would sell its 50% stake in its joint venture with AvtoVAZ, the country’s biggest automaker. The U.S. automaker’s last Russia-built model is the Chevrolet Niva compact CUV.