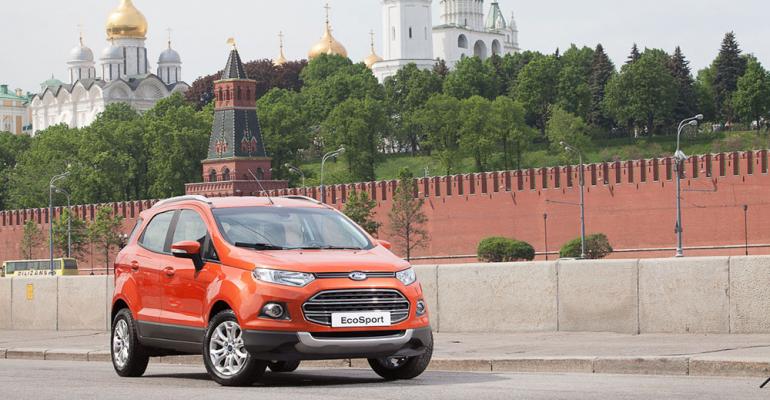 One analysis suggests limited capacity, possible loss of government support, devaluation of the ruble and other factors may prompt global automakers to halt assembly operations in Russia and instead focus on imports.

ST. PETERSBURG, Russia – Many global automakers may consider closing their Russian plants and instead focus on importing vehicles as the country’s car market continues its steep decline and forecasts are unfavorable.

According to a recent report by the Industrial Committee of the Russian State Duma, the domestic market’s steady decline is reflected in a 6% drop in sales through May, compared with year-ago.

The report predicts full-year sales might decline between 26% and 30% and the tailspin might continue for several years. By 2018, analysts say, sales might total only 2.3 million units, far short of the initial target of 3.6 million.

Roland Berger Strategy Consultants estimates global automakers’ localization of production in Russia no longer will be profitable after 2017 if the country’s economy remains stagnant and import duties on new cars are cut from the current 25% to 15% by 2019, in accordance with Russia’s World Trade Organization obligations.

The Roland Berger analysis finds the capacities of most global automakers’ Russian plants are too small to make them competitive with their U.S. and European Union facilities.

At the same time current subsidies from the Russian government give local producers an advantage of only 5% to 10% over the imports. Even these subsidies may be abolished by 2016, due to a shortage of federal funds caused by devaluation of the ruble and the financial effects of the annexation of Crimea.

As a result, analysts say, many foreign automakers without large production facilities in Russia may consider terminating assembly operations and shifting to imports. Those manufacturers include PSA Peugeot Citroen, BMW, Ssangyong, Opel, Audi and the Chinese brands.

Despite the dire forecasts, some of the producers themselves remain optimistic. A Ford Sollers spokesperson says the joint venture will launch a new engine plant in 2015 and plans to raise the level of localization to 60% by 2016.

A PSA Peugeot Citroen Russia representative says the company has no immediate plans to revise its strategy for development in the Russian market. He notes prospects for growth are good because of the market’s potential big volume, the low number of cars now on the road and the ability to build for export.

Renault Russia spokeswoman Oxana Nazarova says the automaker’s strategy calls for producing cars as close to sales markets as possible, due to favorable logistics and other factors. Localization also reduces the effects of fluctuating exchange rates.

Vasily Melnikov, director-corporate communications at BMW Group Russia, says production of cars at the Kaliningrad plant remains profitable and is convenient for customers, but further prospects are unclear.

Forecasters with VTB Capital, one of Russia’s leading auto-market analysis agencies, predict small producers may leave the market while most large-volume players will continue production in the country, in accordance with the demands of the unstable market.

Much will depend on the Russian government’s ability to provide additional support to foreign automakers after 2016, the analysts say.

State support for domestic automakers, meanwhile, mainly will depend on Russia’s macroeconomic situation over the next several years, says Alexander Morozov, head of transport and special machine-building for the Russian Ministry of Industry.