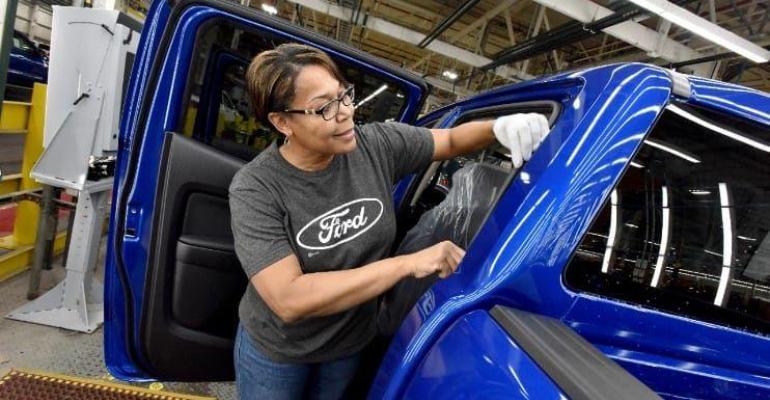 Many procedures to safeguard worker health in the midst of the COVID-19 pandemic already are in place in China, where Ford has operated on a substantially normal schedule since late February, says Gary Johnson, chief manufacturing and labor affairs officer.

Ford outlines preparations for resuming North American production while emphasizing it has not set firm dates for reopening its U.S. and Canadian plants.

“I completely trust the process we’ve come up with,” chief operating officer Jim Farley (below, left) tells reporters during a Thursday conference call.

Many procedures to safeguard worker health in the midst of the COVID-19 pandemic already are in place in China, where Ford has operated on a substantially normal schedule with some 90% of its employees since late February, says Gary Johnson, chief manufacturing and labor affairs officer.

Safety measures adopted at Ford Thailand as well as Ford China will be adopted at facilities in North America and Europe, Johnson says. Ford Europe plans to resume phased-in production on May 4.

“We’ve got a really good return-to-work strategy," Johnson says. “We’ve been proving that in China and Thailand.”

Core criteria for when and how to send employees back to work include partnering with governments and health authorities worldwide to monitor and contain the COVID-19 virus, says Kiersten Robinson, chief human resources officer. Best practices, such as cleaning protocols, will apply to all 800 Ford worksites worldwide, she says.

The additional safety measures in place when production resumes do not mean line speeds will be slowed down, Johnson says. Full production will not be reached and overtime will not be scheduled during the first few weeks, he says.

Ford also is attempting to coordinate the restart of production with its more than 1,500 suppliers. “We have some working stock,” Farley says, but adds: “We don’t know what we don’t know yet. We (still) feel very comfortable with the start dates.”

Creation of safety protocols and preparations for resuming vehicle production have been made in consultation with the UAW and the Unifor union representing Canadian auto workers, Johnson says.

Adds Farley, “If the union doesn’t feel comfortable bringing people back to work, we’re going to respect that, and vice versa.”

In a statement released after the Ford media briefing, UAW President Rory Gamble says: “We continue to engage in talks with Ford on an ongoing basis regarding protocols for the health and safety of our members in the workplace.

Employees showing COVID-19 symptoms will be tested – as will employees who only “have a concern,” Johnson says. Ford does not plan to test all of its 188,000 employees worldwide.

The approximately 120,000 Ford employees working remotely could return to their workplaces as early as late June or early July, Robinson says.

As is being done in China, Ford will make personal protection equipment available to dealerships and customers visiting those dealerships, Farley says.

Ford, General Motors and Fiat Chrysler closed their U.S. and Canadian plants in mid-March as the COVID-19 pandemic mushroomed across the U.S. GM and FCA have not indicated when they will reopen their North American facilities.