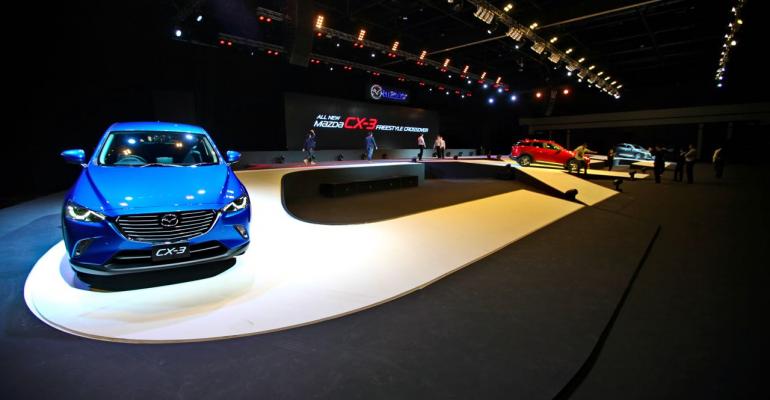 The new model puts the automaker in the subcompact CUV space for the first time, a hot segment that has doubled its share of the Thailand market in the past year.

BANGKOK – Hot-selling Mazda has high hopes for its new CX-3 small CUV, introduced to the market at the Queen Sirikit National Convention Center here this week.

The model is expected to build on the recent success of the Mazda2 and Mazda3 cars and bigger CX-5 CUV in Thailand. Like the new CX-3, all are powered by the automaker’s stingy Skyactiv powertrains, a strong point for the make in a market that is shifting even more toward fuel efficiency.

Thanks to this trio of distinctively styled models and a positive reception to its new generation of Skyactiv technology, Mazda steadily has been growing its market share, even as industrywide sales have plunged over the past three years.

Through September, Mazda deliveries reached 26,361 units, up more than 300 from like-2014 against a market that is down 10.5% overall. Driven by the new Mazda2 small car, Mazda was the fourth-best selling brand in Thailand in September, with sales rising 14.5% year-on-year, an unheard-of position for this usually niche marque.

Emboldened by the strong reception of its latest models, the automaker is beginning to push its car models toward the premium end of their segments. That’s especially true of the Mazda2, which also is part of the Eco Car 2 program.

Into that promising equation comes the new CX-3, which places Mazda into the subcompact CUV space for the first time. As in the U.S. and Europe, it’s a rapidly growing segment here, albeit one that’s starting from a small base. Subcompact CUVs are expected to count for 4% of the market this year and continue to grow, up from a 2% share in 2014.

The CX-3 is well-positioned to tap into this momentum, Mazda Sales Thailand President Hidesuke Takesue says.

The CX-3 isn’t positioned as an off-roader, but its slightly higher ride height could be useful in a market like this, where flash flooding is a regular occurrence and driving surfaces often are poor.

Meanwhile, Thailand is due to change its excise duties to a carbon-dioxide-based system for 2016, a move that is creating uncertainty in the market.

With prices expected to rise next year as a result, the taxation switch could stimulate sales during the remainder of 2015, particularly as orders are taken at next month’s Thailand International Motor Expo.

Vehicles ordered before Dec. 31 but not delivered until next year will be subject to this year’s excise duties.

While most OEMs remain tight-lipped about potential price increases, Takesue hints Mazda may stand pat and indicates he sees light at the end of the tunnel for the Thai market’s long and painful downturn.

“We hope the market will recover to some extent next year,” he says.

Takesue also agrees the upcoming switch to a CO2 taxation system will change the dynamics of the new-car market, with more emphasis on fuel efficiency that plays well with Mazda’s Skyactiv technology strategy.

“The focus of the next two years is very different,” he says.