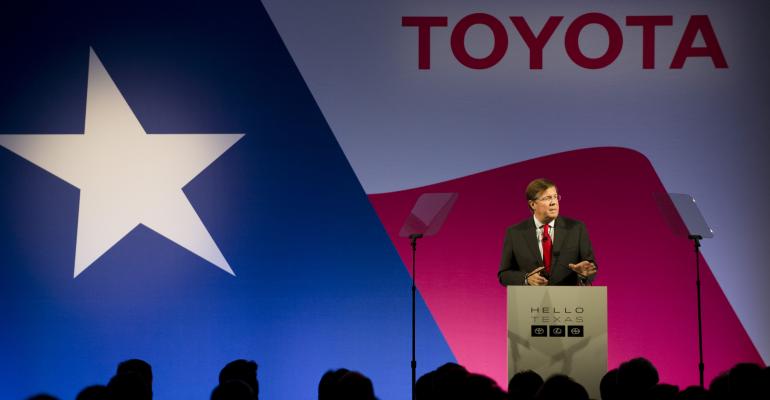 Amid the pandemic, the number of employees working at Toyota Motor North America’s Plano, TX, campus is likely to be significantly less as the automaker adapts to wider use of working remotely.

Up until the middle of March, the gleaming new headquarters of Toyota Motor North America in Plano, TX, housed more than 4,000 employees.

Now, amid the COVID-19 pandemic, the number of employees working at the Plano campus is likely to be significantly less as the automaker adapts to wider use of working remotely.

Toyota completed moving its headquarters from Southern California to a $1 billion complex on the open plains north of Dallas in 2017 after years of planning that merged the Japanese automaker’s sales, administrative and planning organizations, bringing employees from the Los Angeles area as well as Ohio, Kentucky and New York to Plano.

Christopher Reynolds, TMNA’s chief administrative officer, says during a webinar sponsored by Automotive News that the pandemic is changing the way Toyota operates not only in Plano but also in its plants and dealerships.

“There are some things you can’t do remotely,” says Reynolds, who notes the returned employees work in a lab used to check the quality of various components.

But for the most part, Toyota employees will continue to work remotely and there is no timetable for bringing them back to the Plano campus, Reynolds says. The experience during the pandemic has shown employees can work effectively and efficiently from remote locations, he says.

With the need for social distancing still required, Toyota is mindful that not all employees will need to return to offices at the headquarters, Reynolds says.

Instead, the automaker is considering reconfiguring office space so work teams can meet every week or every few weeks while carrying out the bulk of their assignments from remote locations, he says.

“We’ll change the way the space is used,” Reynolds says. Employees who do return will have to fill out a health assessment each day.

The increased reliance on working remotely might have other benefits as well. “We will be able to have a broader geographic footprint because we’ve gotten so much better at working across distances,” Reynolds says. And the increase in the number of employees working remotely could make it easier to recruit employees who, for various reasons, might not want to move to the Dallas-Fort Worth Metroplex, he says.

For some positions, it may not be necessary for Toyota employees to move but instead they may travel to Plano for an occasional meeting, he says.

Reynolds also says the pandemic is changing other aspects of the company’s operations in the U.S. For one thing, the factories, such as the pickup truck plant in San Antonio, TX, have changed. “If you go into our factories, they look completely different,” Reynolds says.

Employees have their temperatures checked each day and wear masks, while assembly-line operations have been spread out and shielded to maintain social distancing, which health experts have said is the best way to prevent the spread of the COVID-19 virus.

Since Toyota’s assembly plants resumed operations, there have been at least two instances where employees tested positive for the virus. Reynolds says Toyota responded by tracing all the infected employees’ contacts and deep cleaning their area.

“This is why we’re going slowly as we reopen,” Reynolds says. The next step will be to add a second shift at the automaker’s truck and utility vehicle plants June 15. “We have to get the truck products to market,” he says. The goal is to do it with the utmost safety.

Reynolds says the pandemic also has changed the way dealers operate, as consumers shop and buy vehicles online more frequently. Toyota dealers have ramped up no-touch delivery once the transaction is completed.

The changes at dealerships and in buyers’ behavior most likely is permanent, Reynolds says.