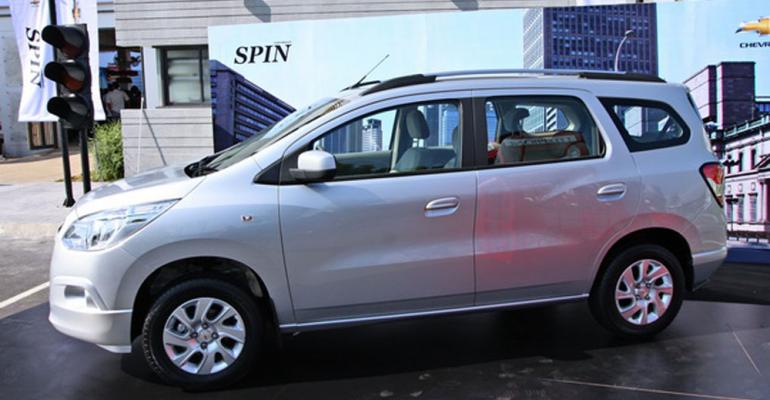 The Spin faces a tough challenge as Chevrolet looks to carve out a place in the country&rsquo;s B-size MPV sector, but the brand has been pitching into new segments over the last couple of years with success.

BANGKOK – A year after its launch in Latin America, Chevrolet's B-segment Spin multipurpose vehicle now is arriving in its other key target markets, Indonesia and Thailand.

Following its debut in Brazil, Argentina and most recently Indonesia, the Spin is unveiled to media here ahead of its public bow at the 34th Bangkok auto show later this month.

The Spin faces a tough challenge in carving out a place in the B-size MPV sector, but Chevrolet has been pitching into new segments here in recent years with some success.

“The Spin has features that none of its competitors have,” Colossi says. “We have enough arguments to take sales out of our competitors and bring new customers into the segment, as we did 10 years ago with the Zafira.”

GM can lay claim to opening up the MPV segment here more than a decade ago with the Zafira, which became a solid sales success and won “MPV of the Year” honors three consecutive times.

Colossi says the Spin results from considerable market analysis, and it is expected to appeal to buyers with its compact size, ease of maintenance, competitive price and driving dynamics.

In Thailand, the Spin won’t replace the Zafira but fill a niche in a small but growing segment, accounting for about 12,000 units last year. It will compete with entries from market leaders Toyota and Honda.

To give it breathing space and a clear sense of identity, GM will pitch the Spin at the top end of the sector, importing the vehicle completely built-up from Indonesia in its 7-seat LTZ trim configuration.

“It will be fully loaded, in only one trim, with (antilock brakes), airbags and other features,” Colossi says, including Bluetooth, Follow Me Home headlamp timer, 4-speaker CD/MP3, seatbelt pre-tensioners and roof rails.

“The Spin is a different vehicle and has been introduced in other markets and shown an ability to attract other customers,” he adds, pointing to its 6-speed automatic and digital instrumentation.

Offering the model in Thailand is a no-lose situation for GM, which likely views the market as plus business for its Bekasi factory in West Java, Indonesia, where capacity is limited to 40,000 units and local content is pegged at 40%.

In addition to the 1.5L LTZ, Indonesia is offering the Spin with more basic trim and with 1.2L gasoline and 1.3L diesel engines.

GM attaches major importance to penetrating Indonesia, a key growth market with huge potential, and the Spin is expected to be a critical driver there.

“This is going to be a key product from Chevrolet to grow in this market,” Colossi notes, adding pre-sale demand has been “remarkable.”
“Our team is highly confident that the Spin will see Chevrolet (achieve) big growth in Indonesia.”

The new model also will be launched as a CBU import in the Philippines during the second quarter.

Indonesian-built cars don't have the highest reputation for quality among Thai buyers, a perception GM says it is confident it can alter with the Spin.

“Our Indonesian quality is at the highest level,” Colossi insists. “I have no doubt that this vehicle will change the image that Indonesian vehicles have in this market.”

The auto maker has tested the Spin on four continents, and Colossi says its year on the market in Brazil has allowed GM to perfect the vehicle.

“Underpinned by GM’s Gamma II platform (used by the Sonic and Aveo), this is already tried and tested architecture,” he says. “In Brazil it was a major success. The target was 35% of the segment share and we achieved more that 50% in less than one year.”

That's an average of 5,000 units a month since deliveries began in July.
“In Indonesia, demand is ahead of production (and) higher than expectations,” Colossi says.

GM Thailand Looks for Piece of Growing SUV Market
May 15, 2012