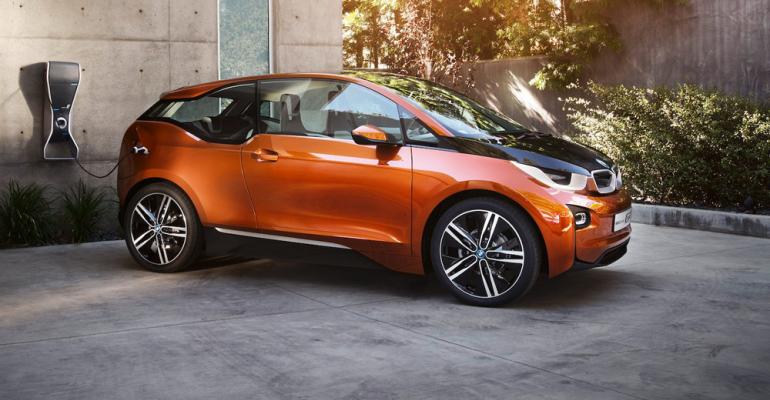 BMW i3 EV ‘Ready to Do Real Volume’

The i3 is being built on a dedicated assembly line in Leipzig, Germany, that Ludwig Willisch, CEO of BMW of North America, tells WardsAuto can scale up quickly if need be.

NEW YORK – A top BMW official says the German auto maker is ready to meet high demand for its all-new i3 electric vehicle, while declining to reveal a sales target for the small car.

“We’re ready to do real volume,” Jose Guerrero, BMW i product manager, tells the media at the EV’s unveiling here.

The i3 is being built on a dedicated assembly line in Leipzig, Germany, that Ludwig Willisch, CEO of BMW of North America, tells WardsAuto can scale up quickly if need be.

Additionally, SGL Carbon of Moses Lake, WA, which is supplying the i3’s carbon-fiber reinforced plastic as part of a $100 million joint venture with the auto maker, is adding a second shift in August, BMW U.S. spokesman Kenn Sparks says.

EVs in their early years are pacing ahead of the early years of hybrid sales, but individual model results have been relatively small compared with similarly sized, internal-combustion-engine vehicles.

The best-selling EV in the U.S. through June was the Chevrolet Volt extended-range car, with 9,855 units, compared with the traditionally powered Chevy Cruze that delivered 133,689.

Nissan is looking to boost sales of its Leaf electric car with a $199-a-month lease price, which many competitors, including the Volt, are matching. But Willisch says BMW would not offer such a low lease price.

Instead, the auto maker is considering a monthly lease fee of $600 for the i3. Based on the EV’s dedicated architecture and components, the brand sees no close competitors in the U.S.

Despite its unique construction and high-end materials, including an aluminum chassis, BMW decided not to price the i3 too high because its small size dictated it must be competitive.

“We’re really entering uncharted territory here, not just in terms of the car but the materials we’re using,” Willisch says.

Guerrero says the cost of owning the i3 should be 15%-18% less than that of a similarly sized non-electric car. “That’s what we’re shooting for,” he says, adding BMW is hoping for i3 insurance costs that are on par with ICE models.

Guerrero shoots down the notion i3 body work will be expensive or complicated, saying BMW has determined “pre-defined cut zones” of the carbon-fiber body panels, and the glue it uses to adhere the panels has a higher tensile strength than the carbon fiber itself.

The BMW i3 will begin production for the U.S. in March 2014, with a projected May 2014 on-sale date. The EV will launch in all 50 states at once, and most BMW U.S. dealers will sell the car, so long as they agree to make a moderate investment in their stores.

Dealers must install charging stations as well as stage the i3, he says. However, the EV will not be isolated or partitioned off from the rest of BMW’s lineup on the showroom floor.

BMW Details i3 Grade Strategy Ahead of Global Debut
Jul 29, 2013