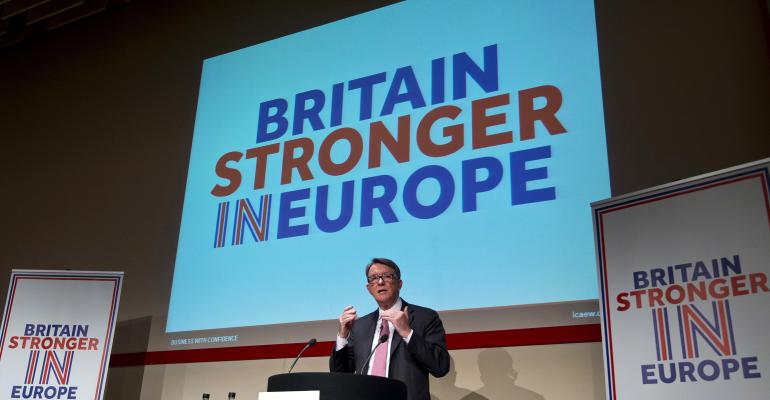 Automakers Say Jobs Could Be Lost If U.K. Leaves EU

A new Society of Motor Manufacturers and Traders survey finds 77% of the British auto industry believes remaining in the European Union is best for their business.

BRUSSELS – With a June 23 date set for the U.K.’s in-out referendum on membership in the European Union, the European car industry has made it clear it wants British voters to keep their country within the 28-member state bloc.

A new Society of Motor Manufacturers and Traders survey finds 77% of the British auto industry believes remaining in the European Union is best for their business.

Conducted by ComRes, the poll reports 88% of large SMMT member companies and 73% of small and medium-sized members are in favor of remaining in the politico-economic union.

Earlier, four top automaker executives publicly rejected Brexit (British exit from the EU) by adding their names to a letter from business leaders published in London’s The Times newspaper.

“Business needs unrestricted access to the European market of 500 million people in order to continue to grow, invest and create jobs,” the letter states. “We believe that leaving the EU would deter investment and threaten jobs. It would put the (U.K.) economy at risk.

“Britain will be stronger, safer and better off remaining a member of the European Union.”

The letter comes just days after British Prime Minister David Cameron returned from a Brussels summit after convincing the other 27 EU leaders to agree unanimously to a revamp of British membership arrangements with the bloc, notably to limit U.K. welfare rights for other EU nationals. Following the renegotiation deal, Cameron set the June 23 referendum date.

The outcome will hinge on whether voters believe Cameron’s Feb. 19 deal will give the U.K. more independence while maintaining its EU benefits, economic and otherwise.

In the Times letter, the 197 business leaders who signed argued the deal does deliver on that, saying Cameron had “secured a commitment from the EU to reduce the burden of regulation, deepen the (border-free EU) single market and to sign off crucial international trade deals,” such as the planned Transatlantic Trade & Investment Partnership with the U.S.

Japanese automakers Nissan and Toyota, both with major operations in the U.K., issued separate statements, saying they would not campaign on Brexit, but nonetheless backed continued EU membership.

Carlos Ghosn, CEO of Nissan, which employs 8,000 people in its U.K. manufacturing, engineering and design facilities and another 32,000 indirectly through dealerships and the supply chain, says his company prefers the U.K. stay within the EU as “it makes the most sense for jobs, trade and costs. For us, a position of stability is more positive than a collection of unknowns.

“Last year we produced more than 475,000 vehicles in the U.K. – 80% of which were exported,” Ghosn notes, adding that while Nissan remains committed to existing investment decisions, “we will not speculate on the outcome nor what would happen in either scenario.”

Toyota says “the open and free access to the European market” were key reasons behind its 1992 decision to locate its first major European manufacturing operation in the U.K. It says 90% of its U.K.-built vehicles are exported and that U.K. operations “are wholly integrated into our European business.”

Toyota Europe CEO Johan van Zyl says the company has “carefully considered the implications for our manufacturing operations,” if the U.K. quits the EU and “we are concerned that leaving would create additional business challenges.

“As a result we believe continued British membership of the EU is best for our operations and their long-term competitiveness.”

A key concern of the European auto sector is that by leaving the EU, Britain could be cut out of the TTIP, which could lead to the mutual recognition of EU and U.S. automotive technical rules. If left out of TTIP, the U.K.’s auto manufacturers would not benefit from its key trading advantages.

The pro-Brexit campaign group Leave Alliance counters a non-EU Britain still could negotiate its own specific trade deals for the auto sector.

“The net result is yet more protectionist barriers,” the group contends. “That makes it all the more expensive for suppliers around the world to export components to EU assembly lines.”

A spokesperson for ACEA, the European automobile manufacturers group, tells WardsAuto: “The U.K. is a major part of the EU automobile manufacturing supply chain, home to 33 OEM production facilities, producing both engines and whole vehicles. This is in addition to many more suppliers to the automotive industry, who are also global competitors in the automotive supply chain.”

The spokesperson points to a 2014 KPMG study commissioned by the Society of Motor Manufacturers and Traders that “highlights the clear mutual benefits of continued U.K. membership in the EU.”

ACEA holds that continued U.K. EU membership “is clearly of economic benefit” for both sides, the spokesperson says.

“In a period of increasing global competition, the U.K.’s place in the EU ensures that it has direct access to one of the world’s largest vehicle markets. It also ensures that the U.K. has a large degree of influence on the EU trade policies, EU vehicle standards and EU laws that affect its economy and its people.”