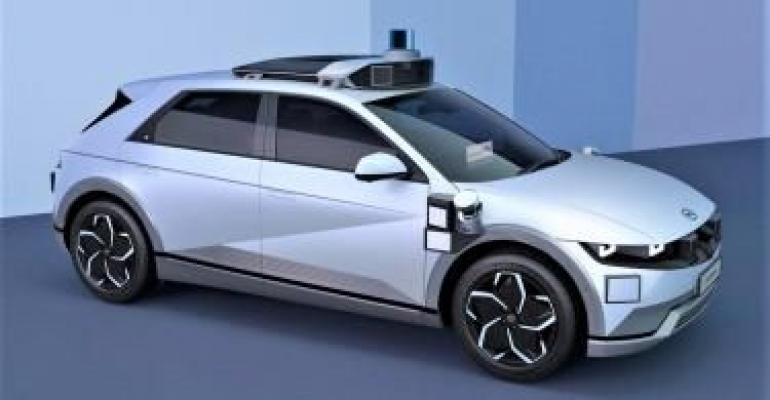 Christine Ho, senior technical advisor to the CTO at Motional, is confident that by the end of this decade, robotaxis will be a common sight on our roads.

Once consumers start using and interacting with autonomous vehicles, the skepticism and even fear will evaporate.

That’s the view Christine Ho, senior technical advisor to the CTO at Motional, expresses while showing media around the Hyundai Ioniq 5 Robotaxi being displayed at the recent Munich auto show.

Speaking exclusively to WardsAuto, Ho says any new technology attracts its fair share of criticism and that Boston-headquartered Motional is prepared for that when it launches its first commercial service to be operated by Lyft in 2023.

“It’s like any new technology that comes out,” she says. “People are afraid or concerned –  for example, think about the mobile phones when they first came out. You had these big Motorola phones, then flip phones and now smartphones that, now, everyone has them.”

However, she says the company recognizes natural caution among people facing autonomous technology for the first time. Ho explains: “I’m hoping as we come out with this platform (the Hyundai Ioniq 5 Robotaxi), the consumers will get a chance to see it and interact with it.

"There is a perception out there that robotaxis are unsafe" or that they behave differently than in simple interactions between a human driver and a human crossing the street, she says. “We give hand gestures, we give a slight nod to say ‘Yes, you can cross.’

“We are trying to build that into this platform following a piece that’s out called ‘Expressive Robotics,’ which is run within our department at Motional, that is figuring a way to interact with consumers and the humans that walk around the car.”

She says the new robotaxis will operate completely unmanned, adding: “Of course, there are no guarantees that you will never have to have a human intervention, but Motional provides a remote vehicle assistance platform that will be able to help navigate through those challenging operational environments.

“I believe Waymo recently released a video of their vehicle with their remote vehicle assistance, and we will have something very similar to that. Naturally, we want to be in the forefront of showing off that capability here with our commercial deployment. We have not yet disclosed the location of the first service because we are doing our evaluations currently.”

Ho is confident that, by the end of this decade, robotaxis will be a common sight on our roads. She says: “I believe the robotaxi industry, as a whole, wants to see the platforms out there even within the coming decade providing accessibility and mobility to the sort of consumers who don’t have access today.”

She also emphasizes that Motional does not see the autonomous service fitting in the “premium” end of the market and will aim to be affordable for the many. Ho concludes: “Karl Iagnemma, our president and CEO, at the IAA conference with Hyundai, stressed that we want to provide mobility to those who do not have access. If you’re a growing family or if you’re elderly, providing that accessibility is really key. So…we want to be accessible to everybody, although I do not have an answer to what the pricing will be.”