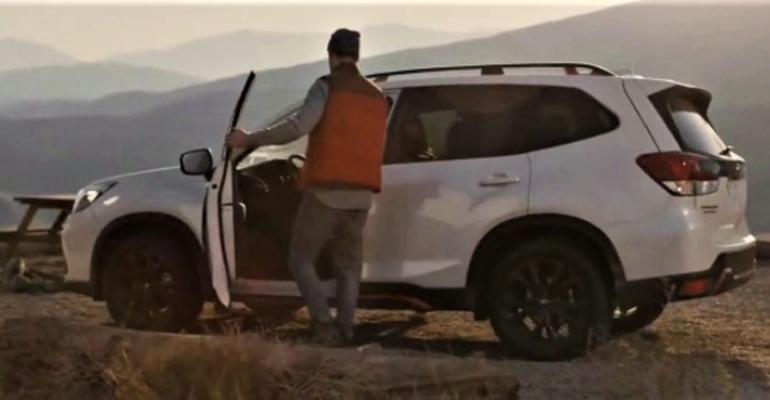 The week of April 5 was the second straight in which only three automakers ranked in the top five ads: Subaru, Lexus and Lincoln.

Subaru claims the top two spots in iSpot.tv’s latest ranking of the most-viewed automotive commercials – the ads that have generated the highest number of impressions across national broadcast and cable TV airings.

The week of April 5 was the second straight in which only three automakers ranked in the top five ads: Subaru, Lexus and Lincoln.

In Subaru’s first-place spot for the Forester, time moves backward as the unpacking of a family’s gear prompts a string of memories about how much life they’ve experienced with their vehicle over the years. Per an iSpot Ace Metrix survey, brand recognition for Subaru came in at 82% (meaning viewers overwhelmingly remembered it was a Subaru ad after watching it).

A dog is literally in the driver’s seat in Subaru’s No.2 spot, which features a furry family –complete with a pet cat – taking a trip in the Outback. The cuddly creatures apparently resonated with viewers: According to Ace Metrix, 45% of survey respondents said the characters were the single best thing about the ad.

At No.3: Lexus encourages viewers to “stay restless,” with help from the ’21 RX, which has available Apple CarPlay integration. Right now, special lease offers are available on select models, including the ’21 RX 350.

The final two spots come from Lincoln, and both play on the “extreme comfort” theme we’ve seen in previous rankings. In fourth place, the Nautilus is on display with its cozy cabin during an epic Hawaiian rainstorm. Per Ace Metrix, surveyed viewers thought this spot was “soothing” and “cinematic,” with 51% of respondents citing the visual scenes as the single best thing.

The No.5 ad takes us to Death Valley, where the Lincoln Aviator Reserve keeps occupants nice and cool even under the beating desert sun. According to Ace Metrix, this spot performed above the norm for auto industry ads across multiple aspects, including desire, relevance and likability, and 41% of surveyed viewers said the visuals were the single best thing.

1. Subaru: For All You Love