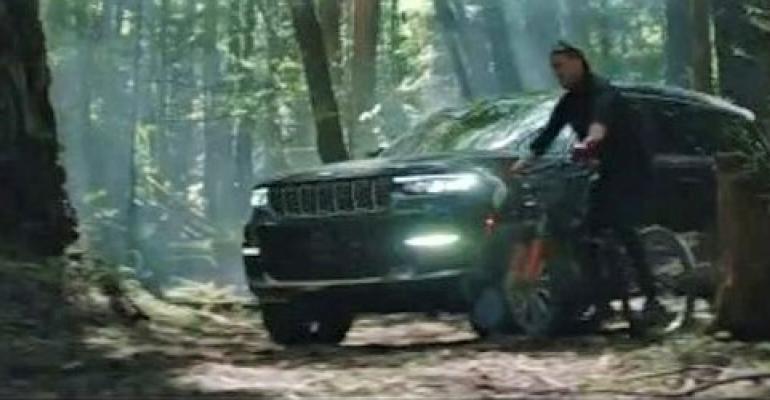 According to Ace Metrix Creative Assessment survey data from iSpot, the Jeep commercial garnered 6.4% more attention than the norm for auto ads in the past 90 days, and was 6.8% more likeable.

Jeep is No.1 for a second consecutive week in iSpot.tv’s ranking of the most-viewed automotive commercials – the ads that have generated the highest number of impressions across national broadcast and cable TV airings.

The top ad for the week of July 5 encourages consumers to embrace the road ahead – whatever it may involve – while driving a Jeep Grand Cherokee. According to Ace Metrix Creative Assessment survey data from iSpot, the ad garnered 6.4% more attention than the norm for auto ads in the past 90 days, and was 6.8% more likeable.

Toyota’s off-road competition spot appears on the list for the second straight week as well. Emphasizing SUV handling capabilities, the ad’s friendly banter between vehicle owners aims to highlight the fun and utility of the brand all at once. Ace Metrix survey respondents found the spot to be “exciting,” and 32% said the single best thing about it was the visual scenes, as the vehicles sped through the desert.

Subaru’s third-place ad puts a premium on safety, from the perspective of parents (the ones buying the vehicles for their kids, in most cases). The ad was 12.4% more watchable than the norm for automotive brands over the past 90 days and earned 14.2% more attention. Fittingly, 35% of Ace Metrix survey respondents said the single best thing about the commercial was the message.

In fourth place, Lincoln’s new spot focuses on the “summer state of mind” and how the brand’s vehicles, particularly the Nautilus, can help take consumers there. Lincoln looked to Fox News to deliver over 20% of its TV ad impressions during the week, and over 40% of impressions for the ad came during news-related programming across networks.

Dodge continues promoting the new Fast & Furious movie (F9) with its co-branded spot in fifth place. During the week of July 5, 14.1% of TV ad impressions for the ad came during reality-TV programming, while another 12.8% came during televised movies. The Weather Channel accounted for the highest percentage of impressions for the spot, with 7% on the week. It was followed by Ion, ESPN and CNBC.

4. Lincoln Motor Company: Summer Is a State of Mind