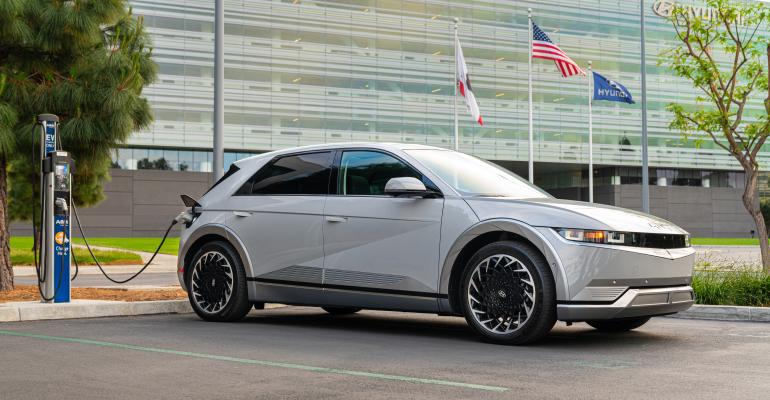 The new Ioniq 5 battery-electric vehicle and hybrid and plug-in-hybrid variants of Tucson and Santa Fe CUVs are boosting the brand’s EV deliveries.

Late last year, the automaker launched its biggest effort to date in the BEV sector, the Ioniq 5 CUV.

And after seeing its plug-in hybrid-electric-vehicle sales crater with the dissolution of the prior-generation Sonata plug-in hybrid, Hyundai is back in the PHEV game, launching this year plug-in variants of its Tucson and Santa Fe CUVs.

Those models, plus a number of conventional hybrids, have driven the Korean brand’s U.S. EV sales up faster than the industry overall in the first four months of 2022, says a Hyundai Motor America official.

“Our mix calendar-year-to-date is about 15% compared (to the industry’s 12% electrified mix),” Trevor Lai, senior manager-product planning for HMA, says here at a recent media event, adding it already is outpacing industry demand before getting deep into launches of new EVs.

According to Wards Intelligence data, Hyundai’s hybrid sales are up 136.3% through April, with 23,302 units sold collectively. That compares to a total U.S. hybrid-sector increase of 6.8% to 272,884 units in the same period. (Hyundai’s U.S. light-vehicle sales overall are down 7.1% in the period, although less than the total industry decline of 16.6% through April.)

Increased deliveries of its Elantra hybrid car and Tucson and Santa Fe hybrid CUVs more than offset declines of 30% each in the Ioniq and Sonata car hybrids.

And Hyundai’s BEV sales have risen 267.7% to 10,681, with deliveries of the new Ioniq 5 accounting for the vast majority of that figure (8,921) and helping offset declines by the Ioniq and Kona BEVs.

“We’ve seen Ioniq 5 demand unlike any other electric vehicle we’ve had,” Lai says.

The CUV is available at Hyundai dealers in 26 states – all of those following California’s zero-emission-vehicle rules, but also others such as Arizona, Florida and North Carolina. Lai says the more affordable Ioniq 5 SE base grade is just arriving in market to join the mid-grade SEL and top-end Limited, which should spur sales even higher. Hyundai was expected in 2022 to increase the number of states the vehicle is to be sold. While Hyundai is waiting to see how demand will shake out in regard to expanding to other states, Lai says efforts are underway to expand Ioniq 5 availability “as quickly as possible.”

The relatively good performance so far of the Ioniq 5 – relative because it trails Tesla’s segment-leading 63,026 Model Ys through April – is important if Hyundai is to meet internal targets on BEV deliveries. The automaker has set a global BEV annual sales goal of 560,000 by 2025 and 1.87 million by 2030. Hyundai plans to launch 11 new BEV models by 2030, plus an additional six for its Genesis luxury marque. The 11 include two cars and four CUVs, although it’s unclear if all will be sold in the U.S. (Already announced for the U.S. are the Ioniq 6 midsize sedan and the Ioniq 7 large CUV, due in 2023 and 2024, respectively.)

While Hyundai has just launched the Tucson and Santa Fe hybrids and PHEVs, and in early 2020 said it planned to have 13 new hybrids and six new PHEVs in market by 2025, it’s unclear how long it will continue to play in those segments.

Hyundai is one of the few automakers still planning new hybrids and PHEVs. Some OEMs, including General Motors, are moving away from the segment – GM calls PHEVs an unnecessary stopgap on the road to full electrification. And, based on comments here, it also appears unlikely that Hyundai will be a long-lasting presence in the hybrid game.

That said, there is no nationwide regulation in the U.S. as there is in some European countries that will see internal-combustion-engine models forcibly phased out. If car buyers don’t take to more expensive and charging-dependent BEVs, it's possible hybrids and plug-in hybrids will stick around for longer than planned.

We’d put our money on hybrids being longer-lived than PHEVs, as the former segment’s volume rose in 2021 to 802,000 while the latter’s was a more modest 174,000. Hybrids also have the advantage of being less expensive than PHEVs, which have been notoriously difficult for automakers to market – consumers appear confused about how they operate and whether to plug them in or not.