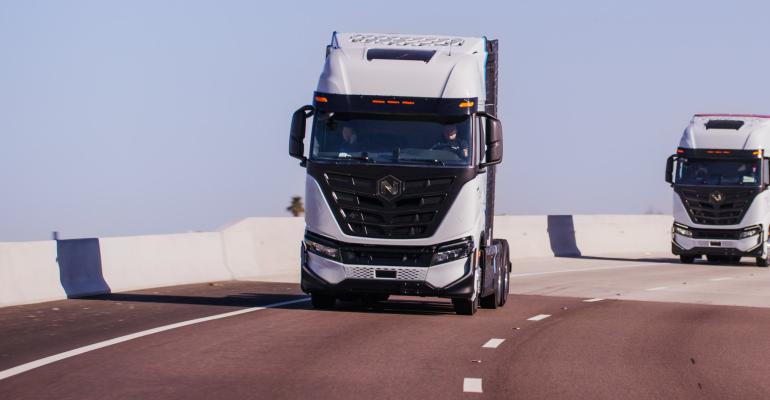 Hydrogen Finally Getting Its Day

A raft of hydrogen investments is underway as California mandates the phase-out of diesel trucks and U.S. and EU policy makers plot a divorce from Russian oil and gas.

LOS ALAMOS, NM – For as long as most of us can remember, the hydrogen economy has been 20 years off. That goes back to the mid-1990s, when General Motors first started revving up the idea of hydrogen power along with a handful of outspoken boosters of the technology.

And while the mobility industry today seems all about a future powered by lithium-ion batteries, there is movement somewhat under the radar to once again advance hydrogen-powered transportation/mobility. But don’t look at your driveway or a car dealership for the signs. It’s all about long-haul trucking, shipping, new-construction housing, buses, farm equipment, forklifts and even aviation.

Taking all those sectors together, hydrogen energy projects and investments seek to produce as much as possible from renewable resources, which would have a significant impact on reducing carbon emissions and reliance on fossil fuels.

“There is an undeniable desire to make more of hydrogen in the energy economy,” says Sumanth Addageria, vice president of Albuquerque, NM-based BayoTech, which supplies hydrogen trailers to distribution points such as TrueZero hydrogen stations in California.

BayoTech’s position is backed up by a recent report by consulting firm Deloitte that projects hydrogen “to be the next energy (sector) to scale.”

The renewed interest in hydrogen comes at a time when industry forecasters are already worrying about the future supply of lithium, and the European Union has finally reached a tipping point, it seems, with wanting to separate itself over time from its dependence on natural gas and oil from Russia and OPEC countries.

And California is mandating the phase-out of diesel trucks. New big rigs and other trucks will have to be zero-emissions in 2040 under a proposed regulation unveiled by the California Air Resources Board in September. Under the proposal, manufacturers won’t be able to sell new medium or heavy-duty trucks fueled by diesel or gasoline that operate in California – instead turning to electric models.  In addition, large trucking companies would have to convert their existing fleets to zero-emission vehicles by 2042. And since batteries that could provide the power to haul the heavy loads of semi-trucks would take up too much room and would reduce the load capacity, fuel cells and compressed hydrogen tanks are widely being viewed as the answer.

Data from a 2020 SAE survey showed that of all hydrogen-powered vehicles registered globally, just 25% were a commercial or heavy-duty truck. The largest number of those were buses, with more than 5,000 currently in use.

The Inflation Reduction Act signed into law in August allocated $8 billion to build out six to 10 hydrogen hubs. Multiple states have prepared Request-for-Proposal submissions for hubs that would be built to generate hydrogen on a large scale in geographic regions where they would likely get the most use and traffic and be able to distribute compressed hydrogen to high-volume users who want to get off diesel fuel and onto renewable-energy-driven hydrogen.

New Mexico, for example, has prepared an RFP response pushing the state as a good spot for a hub as Gallup alone refuels 7,000 tractor-trailer trucks daily, and is a major stop point for trucks carrying goods from the Port of Los Angeles to eastbound destinations. New Mexico also is positioned to generate a great deal of its hydrogen from wind and solar. The state is part of a hydrogen hub consortium with Utah, Wyoming and Colorado. Interstates 10, 25, 40, 70, 80 and 90 all touch that four-state region.

“Batteries are a good solution for many applications, but not for some of the biggest CO2 emission applications,” says Tom Stephenson, co-founder of Pajarito Powder, a New Mexico hydrogen components and technology startup backed by Hyundai Motor Group.”The simplest way to think about the future of energy is that batteries will be a good substitute for gasoline, while hydrogen is probably the best substitute for diesel.”

The timetable for the hubs coincides neatly with truck-makers' plans. Nikola Motors in Phoenix, for example, plans to deliver its first hydrogen-powered trucks in the second half of 2023. Nikola's truck has a range of up to 500 miles, will refuel in 20 minutes and maintains 645 horsepower. The cost runs between $200,000-$600,000 depending on range options. Daimler Truck AG and Volvo Group formed Cellcentric, a joint venture to accelerate fuel-cell powered trucks, and both companies intend to be producing fuel-cell trucks at scale the second half of this decade. Kenworth Truck Co. and Toyota are in a joint venture that plans to start rolling out fuel-cell trucks by 2025, funded in part by a grant by the California Air Resources Board.

While New Mexico is the second-largest oil-producing state, it also is trying to build on its expertise in hydrogen research – which dates back to the Manhattan Project during World War II ­– to become a leading center of excellence around an emerging hydrogen economy, as well as a hydrogen production and distribution hub.

Leaving passenger vehicles largely to batteries makes sense, given the faster routes to hydrogen adoption by trucks and other sectors that generate far more greenhouse emissions than cars and SUVs. There are about 15,000 hydrogen-powered cars on the road after more than a decade of tinkering, and virtually all in California. Conventional wisdom is that expanding the commercial truck and fleet use of hydrogen can be done much faster, and the resulting infrastructure and scale could one day make hydrogen passenger cars sold at scale a possibility.

Scaling up tractor trailer trucks to run on hydrogen will help pave the way to wider applications in marine and aviation uses.

Consider that one container ship over the course of a year generates more carbon emissions than 50 million cars. Just 15 such ships emit as much as today's entire global car parc of roughly 750 million vehicles. While converting diesel engines on ships to hydrogen fuel cells won’t happen tomorrow, industrialized nations that rely on shipping are keen to explore their economic and technical viability.

Meantime, ports are expected to increasingly utilize hydrogen-powered electricity so that ships at port do not have to idle their diesel engines for days, in addition to being hubs for trucks to fuel up on hydrogen before transporting the goods off the ships.

Aviation contributes 10% of U.S. transportation emissions and accounts for 3% of the nation’s total greenhouse gas emissions. Still, there is much interest in the U.S. and other countries to make flying part of a growing hydrogen economy.

Universal Hydrogen, a New Mexico start-up aviation company, has drawn investments from American Airlines, Airbus Ventures, GE Aviation and Toyota Ventures, as well as several major hydrogen producers and aircraft lessors. The company plans to have hydrogen-powered turboprop planes that go 620 miles (1,000 km) and seat 70-plus people by 2025. The airlines and plane builders investing and watching are eyeing applying the technology to the larger single-aisle jets that carry over 120 passengers. EU countries like both classes of planes for aviation on the continent.

“Together with our investors, we are putting together the end-to-end value chain to make hydrogen aviation a near-term commercial reality,” says Paul Eremenko, co-founder and CEO of Universal Hydrogen.

There are huge investments happening in parallel with that of the U.S. government and the EU:

Europe Punches the H2 Accelerator in Response To Putin

For all the start-up and infrastructure investment taking hold in the U.S. around hydrogen, Europe is putting its foot on the hydrogen accelerator. And for good reason. Some European countries – Iceland, Finland, Norway – have long been building up hydrogen economies, but now the rest of Europe has embraced the idea of hydrogen as a preferred technology not only for reducing greenhouse gas emissions, but also eventually untethering from Russian gas and oil. Russia President Vladimir Putin’s unprovoked invasion of Ukraine, his refusal to recognize that country’s sovereignty and the resulting global economic pain, has energized the EU.

With the Versailles Declaration agreed upon in March, leaders of the 27 EU member states agreed to phase out dependence on Russian fossil fuels as soon as possible. Last May, the European Council agreed on a ban on almost 90% of all Russian oil imports by the end of 2022 –with a temporary exception for crude oil delivered by pipeline. The EU states urged the Council to finalize and adopt without delay the sixth package of sanctions which will include this ban.

This movement is driving the EU to accelerate hydrogen investments to not only power heavy trucks, but also for home heating and cooling and electric power. Hydrogen fuel-cells generate energy that powers electric motors.

Former British Prime Minister Boris Johnson told the recent COP27 climate conference in Egypt that, because of Russia’s invasion of Ukraine, the world needs to "double down" on the net-zero goal instead of abandoning it. Johnson previously set an objective of the U.K. being net-zero by mid-century. Johnson said that after the invasion "some people have drawn the conclusion that the whole project of net zero needs to be delayed and we need to reopen coal fields and frack the hell out of the countryside…(but) this is not the moment to abandon the campaign for net zero and turn our backs on renewables.”

Said Johnson, “It's the moment to put the electric throttle to the floor.”