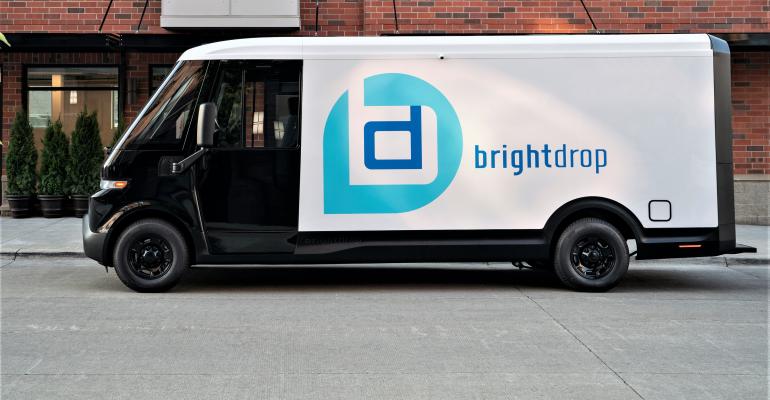 General Motors restates its goal to be the market-share leader in electrified vehicles even as it increases profits from vehicles with internal-combustion engines.

“We changed the world before and we’re doing it again,” GM Chairman and CEO Mary Barra says during the first day of a two-day investors’ meeting at the automaker’s Technical Center in Warren, MI.

She says GM’s plans call for doubling revenue and expanding margins to 12% to 14% by decade’s end by launching new products, businesses and connected services.

Those plans include showing the company’s pivotal, battery-electric Chevrolet Silverado in January at CES in Las Vegas, where Barra is scheduled to be the keynote speaker.

Barra says the plans also call for introduction of “affordable EVs” in multiple segments while turning GM automobiles into platforms for the distribution of a new range of services such as insurance, where there are opportunities for growth of up to $25 billion in additional revenue.

GM President Mark Reuss says the Silverado was designed from the ground up as a BEV.

“No one will be able to touch us in the EV truck space,” says Reuss, noting the all-electric platform for fullsize pickups shared by the Chevrolet and GMC brands.

The Silverado BEV will offer customers a GM-estimated range of more than 400 miles (644 km) on a full charge, the company says.

Reuss says more than 50% of GM’s manufacturing operations in North America and China will be capable of building electric vehicles by 2030, moving the company closer to its long-term goal of phasing out ICE-powered vehicles by 2035.

At this point, though, GM is not planning to build a new assembly plant. The preferred strategy is to build BEVs and ICE vehicles in the same plant, as GM is preparing to do at its assembly complex in Spring Hill, TN, which builds ICE utility vehicles and is preparing to build the Cadillac Lyriq BEV, Barra says.

The Silverado BEV and GMC Hummer battery-electric pickup and SUV (pictured, below) will be built at Factory Zero, which occupies GM’s old Detroit-Hamtramck plant, but GM will consider converting another plant to electric truck production. GM is preparing to build conventional fullsize pickups at a plant in Oshawa, ON, Canada, once destined for closing. An all-new plant requires much more time to prepare and validate, company officials note. 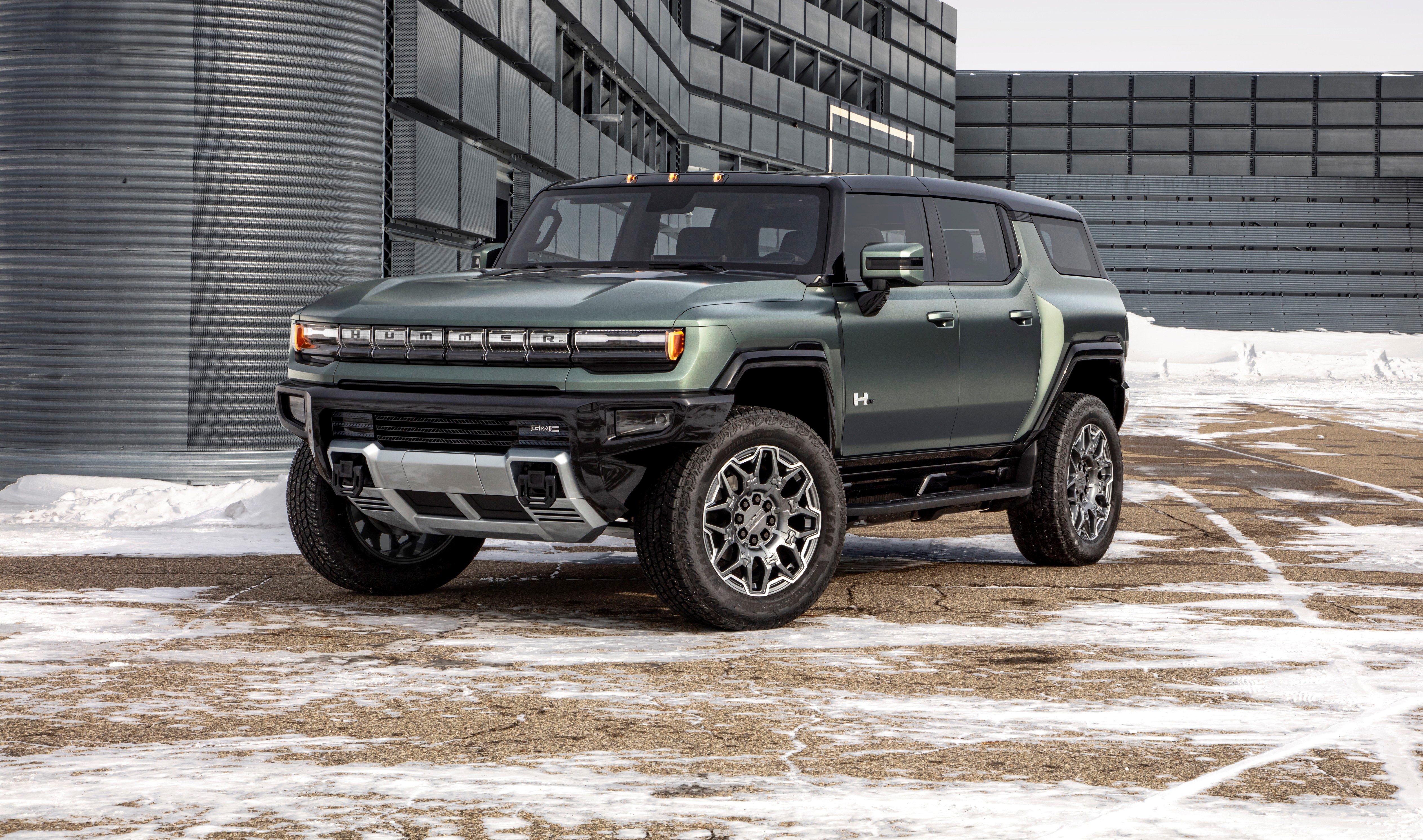 One factor that could determine when and where GM builds its battery-electric trucks will be the success of Cruise, the company’s autonomous driving unit. Factory Zero will begin building the Cruise Origin AV beginning in 2023 when the vehicle will be deployed commercially.

Overall, GM expects to become the market-share leader in BEVs, Reuss says. The array of BEVs powered by GM’s Ultium batteries will include high-volume entries, including Chevrolet CUVs priced at about $30,000; Buick CUVs; trucks from Chevrolet, GMC and Hummer; and premium Cadillac models such as the Lyriq in 2022.

Reuss stresses the shift to BEVs will not require eliminating blue-collar jobs. GM employees have the skill and knowledge needed for the transition to electrification, he says.

GM also shows off one of its advanced products, GM Ultra Cruise (pictured, below), which it plans to deliver in 2023.

Ultra Cruise, which requires the driver to keep eyes on the road, builds on GM’s existing Super Cruise technology. It is a Level Two autonomous system capable of navigating on more than 2 million miles (3.22 million km) of paved roads in the U.S. and Canada.

Customers will be able to travel hands-free with Ultra Cruise on nearly every road, including city and subdivision streets in addition to highways, according to Doug Parks, GM executive vice president-global product development, purchasing and supply chain. 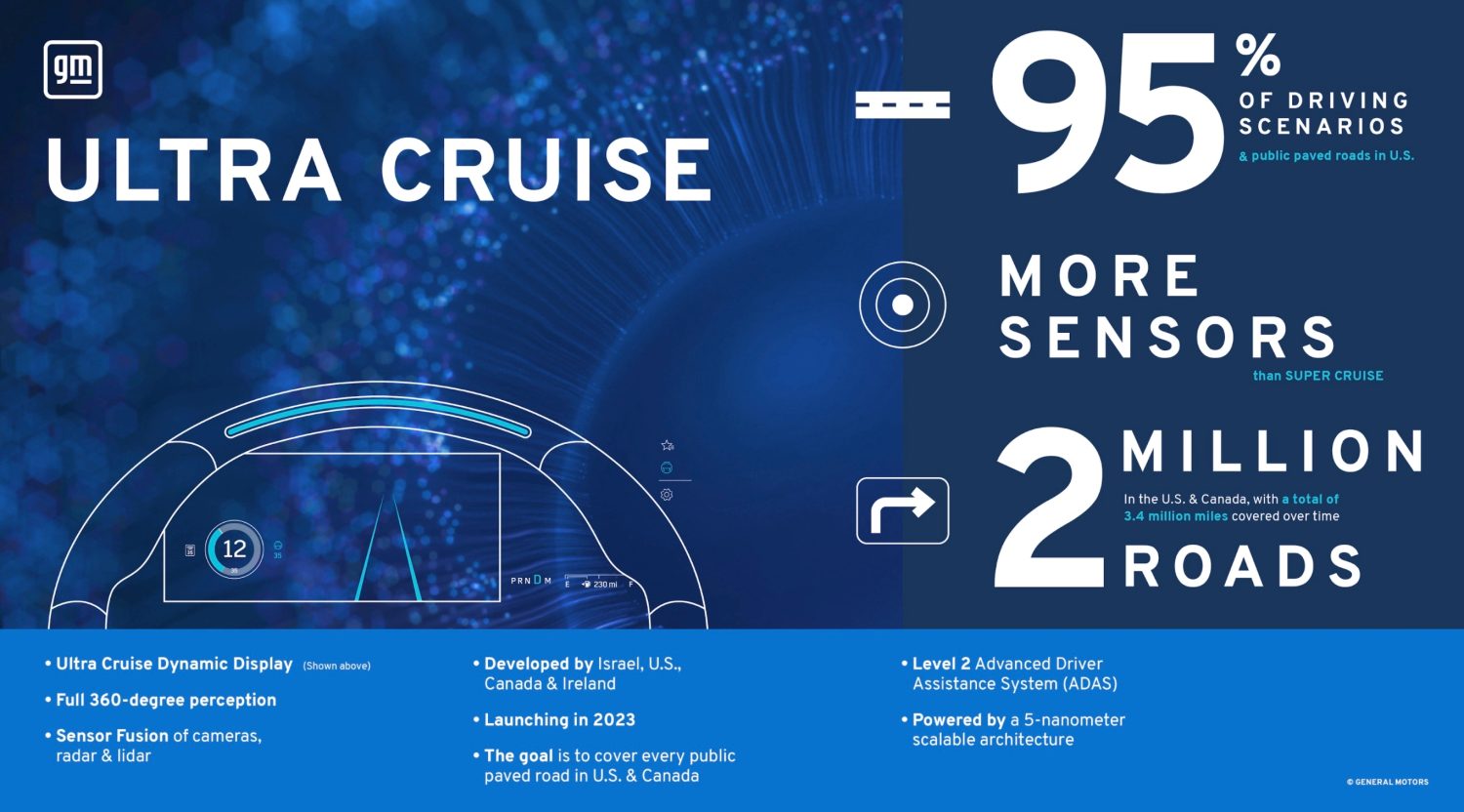 GM’s goals include doubling revenues by entering new businesses such as GM Defense, a segment from which the company exited decades ago, and new services such as OnStar Guardian, which uses the OnStar emergency network to offer help during emergencies at home.

Bright Drop, a system of connected products targeting first- and last-mile delivery customers, was brought to life in less than two years.

“GM’s vision of a world with zero crashes, zero emissions and zero congestion has placed us ahead of much of the competition in electrification, software-enabled services and autonomy,” says Barra. “Our early investments in these growth trends have transformed GM from automaker to platform innovator, with customers at the center.”