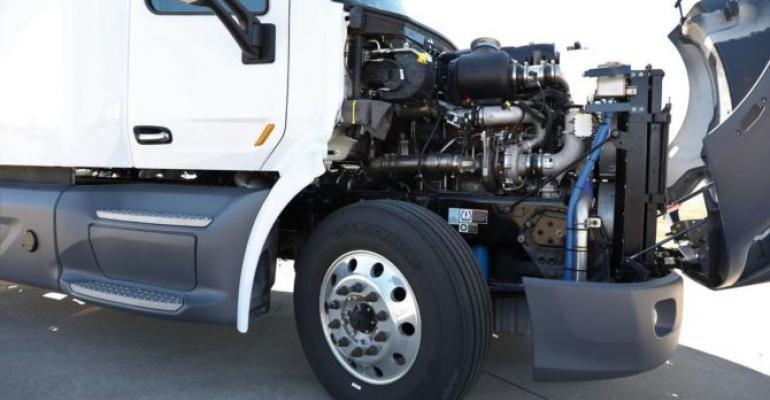 Achates Power and Walmart are teaming on a joint test of the engine-maker’s opposed-piston diesel in the retail giant’s tractor-trailer rigs. Achates says the engine cuts CO2 emissions 10% without any added cost.

With help from Walmart Corp., among others, Achates Power Inc. is launching tests of a new heavy-duty diesel engine capable of meeting tough emissions standards set for 2027 by California.

The new engine built by Achates Power of San Diego is being put into service in a Peterbilt 579 Tractor as part of a fleet of vehicles operated by Walmart.

The cleaner, heavy-duty opposed-piston diesel engine is the result of a project funded by the California Air Resources Board. It is the only diesel engine operating on the road capable of meeting CARB’s 2027 regulation that requires a 90% reduction in emissions of nitrogen oxide compared to current standards, Achates says.

The Achates Power ultra-low-NOx engine (pictured, below left) is engineered to achieve superior fuel efficiency because of its lower heat losses, improved combustion and reduced pumping losses. It reduces carbon dioxide by 10%. 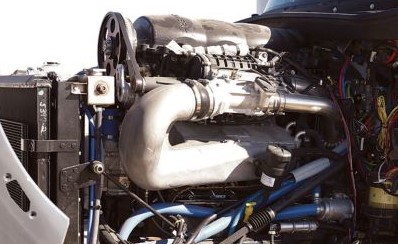 The engine delivers ultra-low NOx by managing exhaust-gas temperatures to ensure rapid catalyst light off and by maintaining aftertreatment temperatures at optimum operating conditions in all driving conditions, the company says.

The project in California around the new diesel is benefiting from a broad coalition and companies connected to the automotive industry, including Aramco Americas, BASF, Corning, Southwest Research Institute, BorgWarner, Eaton, Faurecia, Tenneco, Eberspaecher and SuperTurbo.

“Achates Power is grateful that the California Air Resources Board led the funding of this demonstration program, and we are pleased to work with our partners around the world to bring opposed-piston engines to the market,” says Dave Crompton, president and CEO of Achates Power.

“It is particularly noteworthy that we were able to achieve the extremely stringent state NOx limits without any additional emissions-control devices, reducing cost, complexity and compliance risk of ultralow NOx powertrain solutions,” he adds.

“This type of innovative, cleaner engine design is what we need not only here locally in the South Coast, but across the country to protect communities nationwide suffering from pollution associated with goods movement,” he says.

The opposed-piston engine can use existing manufacturing facilities, processes and materials to allow rapid time-to-market and deployment. It also uses existing components and supply chains. It is expected to cost less than current engines even as it meets much more stringent environmental regulations.

The Achates engine requires no additional emissions-control devices and has a fewer parts than conventional engines. In addition, Achates Power is conducting further testing with a fully aged catalyst to demonstrate continued ability to meet CARB’s stringent standards.

The Achates Power engine, which is based on architecture initially considered and then rejected back in the 1930s, demonstrates as much as a 30% fuel efficiency improvement compared to other diesels, with comparable or better emissions and cost. The Achates Power Opposed-Piston Engine is designed to meet future emissions and fuel economy standards more cost-effectively than any other engine solution, according to the company.

Founded in 2004 by Dr. James Lemke with the specific mission of building cleaner, more efficient engines, Achates Power has a staff of engineers and scientists working with leading engine manufacturers to bring the opposed-piston engine to market.