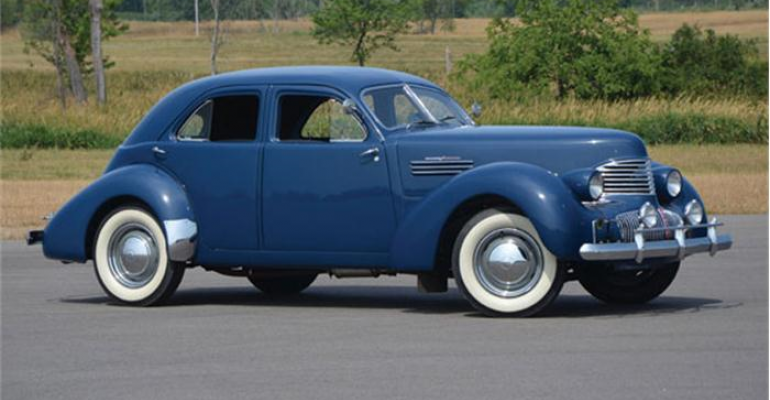 Graham-Paige Motors continues bleeding red ink in the third quarter with a net loss of $469,994, or 30.3% more than the $360,763 loss reported in like-1939. However, the automaker’s financial position is expected to improve dramatically in the near future as its plants gear up for production of defense materiel, including components for a $6 million Army aircraft order recently placed with Tucker Aircraft. In addition, G-P is benefiting from leasing space in its administration building to house officials of a new supplier group made up of companies building aircraft components under a $500 million federal government contract.

After completing model changeover on its car line, Studebaker, mid-month, launches its all-new ’41-model  M-Series trucks. The lineup consists of a conventional pickup on three wheelbase lengths in the light-duty segment along with medium-duty variants, also in three wheelbase lengths. While ads for the standard-wheelbase pickup carry the Coupe Express moniker, the truck features less car-like styling than prior models sold with that name.

According to Ward’s Automotive Reports, “The Army appears well embarked on a program to introduce large fleets of midget armored cars for conveyance, messenger, reconnaissance and general scouting work.” The awarding of two contracts to build the vehicles “emphasizes a trend that may bring the displacement of all motorcycles in the Army in favor of the small cars,” WAR says. American Bantam will build 1,500 units for $1,419,051, while Ford will produce a nearly equal number for $1,387,500. Willys-Overland also is expected to be awarded a contract to supply the cars, all of which will have a quarter-ton capacity, a top speed of about 60 mph (97 km/h), feature 4-wheel drive and weigh some 1,700 lbs. (771 kg).

The War Production Board forecasts a bumper crop of cars and trucks, totaling nearly 6.0 million units in 1946. The forecast is based on the volume of steel allocated to the auto industry next year compared with 1940, considered the last year of free-demand output prior to the war. Output in 1941 was higher, but was influenced by a large number of government contracts. According to WPB calculations, 1940 saw the industry use 8,579,000 tons of steel to build 4,838,561 cars, trucks and commercial cars, of which 2,618,000 tons was used to produce 777,000 trucks and commercial cars. The remaining 5,961,000 tons went into 3,692,328 passenger cars. Therefore, based on a 188% increase in 1946 steel tonnage vs. 1940, WPB forecasts output of 1,463,200 commercial vehicles. The 121% rise in steel volume seen for cars equals output of at least 4,491,000 passenger cars. Buoying the 1946 outlook are the expected mid-year launch of newcomer Kaiser-Frazer along with redesigned models from Crosley and Willys.

Absenteeism and strikes at supplier facilities continue to bedevil automakers. Of particular importance is a 2-month-old walkout at Warner Gear that has idled production lines at Studebaker and Willys since Oct. 1 and threatens to curtail output at Chrysler and several truck makers. Strikes at glass suppliers Libby-Owens-Ford and Pittsburgh Plate Glass over union-shop issues threaten to bring all car production to a halt within a few weeks, WAR says. At the same time, Big Three operations in Canada remain strike-bound over the issue of a union shop that began at Ford in September. Workers at Chrysler and GM later walked off the job in support of their Ford counterparts.

Although Willys output is at a standstill due to the lack of transmissions resulting from the on-going Warner Gear strike, the company is moving ahead with 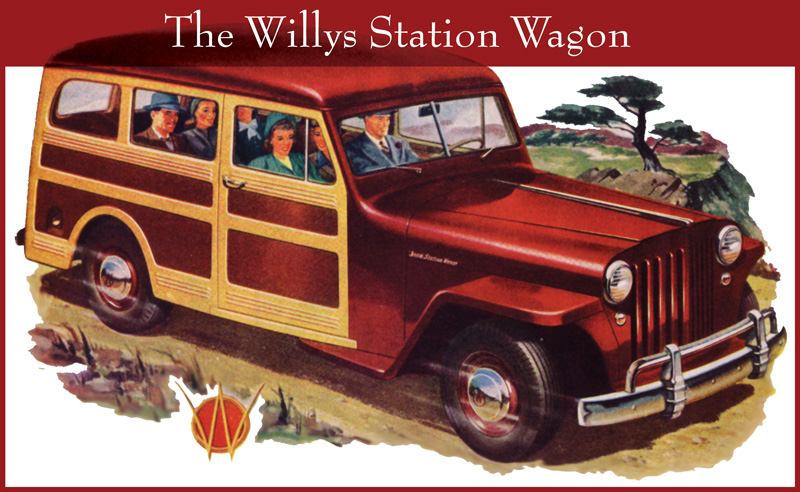 development of a pickup, panel van and station wagon toward a February 1946 production launch. All of the new vehicles are to be powered by a variant of the 4-cyl. engine used in the  Jeep utility vehicle popularized by its extensive role in war-time operations. Despite a backlog of orders for the utility vehicle already on the books, Willys dealers are nevertheless pressing for a price cut to spur additional volume. The current base price is $1,090 as delivered at the Toledo plant. Options such as a top, power takeoff, and hitch, among other items, can raise the sticker to the $1,400-$1,500 range.

Ford stock will be available to the public for the first time in 37 years, when an initial public offering of non-voting A-Class shares hits the market in January 1956. The company was taken private in 1919 when founder Henry Ford bought out minority stakeholders. The IPO is being pressed by the Ford Foundation owner of 3,098,908, or 90%, of the 3,452,900 outstanding “A” shares. The remainder of Class A stock and all Class B voting shares are owned by the Ford family. Share prices will be determined following the release of the automaker’s first full financial statement at the end of this year, but is currently estimated at $60. Earnings in 1954 were estimated at $200 million on revenue of $4 billion. According to the company, earnings in the first nine month of 1955 exceed that of any prior full year and it estimates full-year pre-tax earnings will exceed those of 1919-1940 combined. An A-share stock split will enable the Ford family to retain 40% of the non-voting shares along with its voting stock.

Pointing to the gold-anodized aluminum grille on the ’56 Cadillac Eldorado Biarritz, Reynolds Metals says variously colored grilles will become commonplace on cars in the near future. Aluminum roofs, “a neglected part of car styling” also are on the horizon, with weight reduction cited as one of the most important benefits. Reynolds says that the 192 lbs. (87 kg) of aluminum used by one un-named car maker, replaces more than 400 lbs. (182 kg) of steel.

Watch for rear- and side-view mirrors to be replaced in the future by an instrument panel display. The new display will “come when the conventional steering wheel gives way to innovative versions that eliminate the top portion of the wheel, giving the driver a clear look at the instrument panel.” Instead of mirrors, the images of cars approaching from the rear will be relayed to the panel display via a prism system mounted on the outside of the car. But, WAR cautions, introduction is not imminent.

Although it took Ford 15 months to build the first 500,000 Mustangs, it will take just 10 months to produce the second 500,000 units, the newsletter reports, based on production schedules through March. According to Ward’s, Mustang ranks third among the 32 makes that report production separately in 1965. So hot is demand for the car, Mustang’s any-month output record of 59,607 units set in June likely will be eclipsed in January 1966 with the 1 millionth unit rolling off the assembly line in March.

Studebaker says buyers of its cars through Dec. 25, will receive $150 worth of Christmas gifts. That is in addition to various bonuses and sales incentives currently in effect for dealers and sales personnel. Buyers receive gift certificates to select items from a “large” catalog Studebaker is sending to U.S. dealerships.

General Motors reports a $2 billion third-quarter net loss after a $2.1 billion plant-closing write-off  erased weaker than expected earnings of $109 million. That is the worst quarterly loss in U.S. automotive history, says WAR. The write-off  large was due to the permanent closing of four assembly plants previously listed as indefinite closures – Lakewood, GA; Framingham, MA; Pontiac, MI, (Fiero) and Leeds, MO.  However, it also covers the planned closure or consolidation in the next three years of several unnamed plants. Not specifically mentioned, but on the chopping block through 1993, are the Pontiac West truck plant, Lordstown, OH, and Scarborough, ON, Canada, van plants and several warehouses and parts depots. Meanwhile, Ford reports third-quarter net income of just $201 million, while Chrysler checks in with a $14 million loss for the period.

Breed Automotive, a major supplier of airbag sensors, says it plans to become a supplier of complete airbag modules using and “all-mechanical” sensor system. It already is making inroads abroad with a mechanical “facebag” supplemental airbag system in countries where passive restraints are not yet mandated. It supplies mechanical sensors to about 58% of airbag-equipped cars worldwide and as well as some 6,000 mechanical airbag modules for U.S.-market Jaguars. Because it costs less than one with electronic sensors, Breed’s mechanical modules “seem  suited for lower-price cars,” says Wards. However, the supplier also cites better reliability and the fact they can be located in the passenger compartment instead of the front crush zone as other advantages of mechanical systems.

WAR  announces a new service for subscribers who, for an additional fee, may have their newsletter sent via FAX at the time of publication. They may also choose to have  10-day and monthly sales and inventory data and/or monthly U.S. and Canada car and truck production totals sent. A discount is available to readers who elect to take all three services. The charges are in addition to the basic subscription fee.

Despite a decline in larger pickup sales in the wake of the Iran-Kuwait conflict that has triggered higher gasoline prices, Ford’s F-Series remains the best-selling vehicle in the U.S. in October and the first 10 months of 1990. Sales for January-October total 437,205 units (including F-SuperDuty), down from 483,763 in like-1989. At the same time, Honda Accord remains the top-selling car with 10-month deliveries reaching 353,571 units, up from 295,829 a year earlier, when was No.4. The best-selling car in January-October 1989 was the Ford Taurus at 299,880 units, but with 267,982 units sold it slips to second place in 1990.