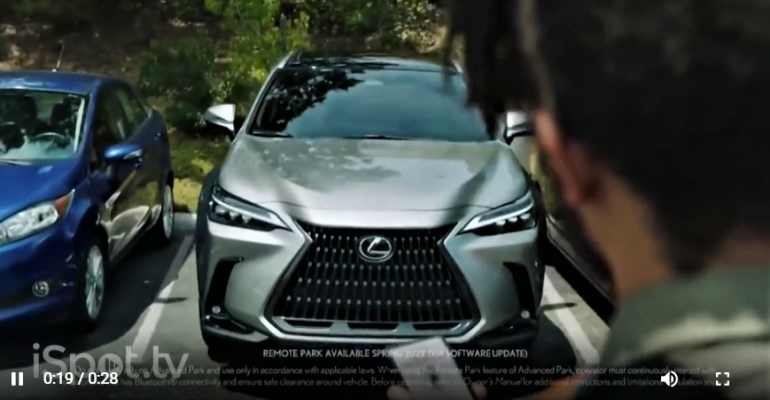 Lexus’ “Get Ahead” ad No.1 among most-viewed automotive commercials.
Dealers

Lexus takes the top two spots for the week of Jan. 10, bumping the previous week’s frontrunner Nissan down to third, while a pair of Toyota ads round out the bottom of the list.

All five ads in iSpot.tv’s latest ranking of the most-viewed automotive commercials share one thing in common: a reliance on last weekend’s NFL Wild Card Weekend games and supporting programming.

Lexus takes the top two spots for the week of Jan. 10, bumping the previous week’s frontrunner Nissan down to third, while a pair of Toyota ads round out the bottom of the list.

At No.1 is Lexus’ “Get Ahead” followed by its “Hustle” ad in second place. The two commercials together generated more than 400 million impressions on a combined estimated national ad spend of nearly $10 million. More than $7.8 million of that was directed at NFL games, which delivered 10% of the overall views.

“Get Ahead” led the pack with a “desire” rating 9.7% higher than the industry norm, according to iSpot’s Ace Metrix survey data, while the gender-bending “Hustle” scored with the best “message” (which was rated the “single best thing” about the ad by 19% of respondents – 71% higher than industry norms).

Nissan, meanwhile, had the only ad that didn’t lean directly on NFL games. Instead, postgame programming led the charge. The EV-themed ad starring actress Brie Larson scored higher than any other ad on the list in the “change” category — 13.5% above industry norms.

But Toyota's two ads, “Perfect Getaway” and “Find Your Groove,” together won the viewer-favorite award with the highest overall Ace Metrix ratings despite trailing in the list at positions four and five. “Find Your Groove” resonated particularly well, with the highest scores for “attention,” “likeability” and “watchability” at 7.7%, 6.7% and 5.2% higher than industry norms, respectively.

Toyota nearly matched Lexus’ overall estimated national spend, with $9.5 million between the two ads, 58% of which was aimed at Wild Card NFL games.