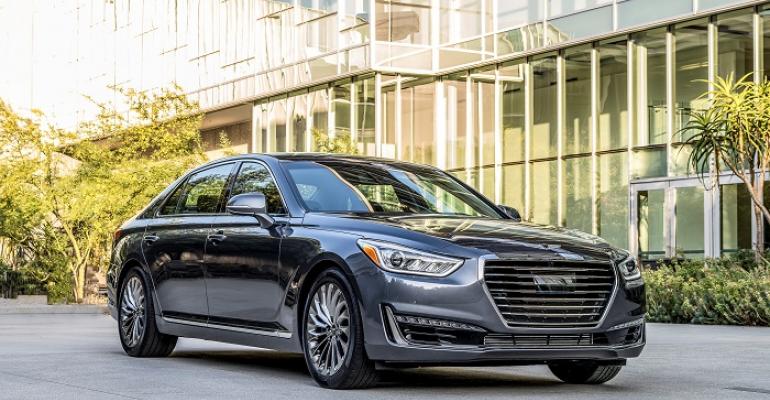 The startup luxury brand from Hyundai foresees separate buildings necessary in only the biggest luxury-vehicle markets in the U.S.

VANCOUVER, BC, Canada – Hyundai targets 2021 as the date its new Genesis luxury brand will require stand-alone stores in the U.S.

However, the parent company is not forcing the issue, says a top Hyundai official, hoping the need for separate showrooms is dictated “organically” by a growing lineup and increasing sales.

“(We said), ‘You’re not going to have enough room. You’re going to need to take this vehicle and separate and get incremental volume out of it...and we want you to come to us and tell us how to do that.’”

However, Zuchowski sees stand-alone retail outlets necessary only in major metropolitan areas with a healthy pace of premium-vehicle sales. He rattles off Miami, New York and Chicago as likely locales for such ventures.

Dealers in midsize luxury markets will have separated showrooms with different entrances for Genesis and Hyundai customers, although service departments may be shared.

The latter setup is the way U.S. Hyundai dealers had been selling the Hyundai Equus large sedan, which the G90 replaces.

Hyundai has whittled down the roughly 415 of its 835 stores that had been selling the Equus, to less than 350 now for the arrival of the G90, focusing on markets with higher luxury-sales penetration.

It is severing relationships with unwanted Equus dealers by showing them the business case, or lack thereof, says Erwin Raphael, general manager of the Genesis brand for the U.S. He notes the money dealers will have to invest in a stand-alone stores and higher levels of customer service won’t “pencil if all you can sell is two or three (vehicles) a month.

“There’s still some of those dealers (who are) not willing to let go,” Raphael tells WardsAuto. “But I think as soon as things have to be done that they will perceive as being taxing, because it’s going to be stressing them in terms of training people, they’ll reach those conclusions on their own.”

All Hyundai dealers were allowed to sell the ’14-’16 Genesis sedan and that will continue, despite the vehicle name changing to G80 for ’17 and it becoming a part of the Genesis brand.

“If right now we tried to take the G80 away from existing Hyundai dealers and say this is a completely new car, it’s not going to be seen like that,” Zuchowski says in an interview. “So we’ve got to wait until it is a new platform and a new car and give the dealers a 5-year phase out period.”

Raphael and Zuchowski both say they prefer a Genesis dealer count closer to 300, although that still is higher than competing luxury brands such as Lexus, which has 236 stores in the U.S.

If the Genesis brand can sell 100,000 vehicles annually, that would leave each dealer average per-store sales of 300 per year.

Zuchowski acknowledges that still may not be enough to support stand-alone stores in some markets.

“It’s going to be very difficult to make it completely stand-alone like Lexus (with 300 sales per store),” he says, noting annual sales of 1,000 Genesis models per store would be a more likely trigger for most dealers to justify a separate showroom.

“This is going to be driven based on market demand,” Zuchowski says. “In a perfect world we want you to come to us and say, ‘I need to build a separate building for Genesis because of the great upside potential’ vs. us saying, ‘Look, if you want Genesis you’re going to have to build us a $3 million building.’”

Hyundai does not have financial assistance available to dealers specifically for Genesis stores, but currently is providing assistance to Hyundai dealers wanting to update their facilities. That money could be diverted to Genesis and added onto, Zuchowski says.

“Let’s say they’re making investments in a new store and it included a single showroom and we asked them, ‘How about if you change your plans and build us a separate showroom with separation and separate doors? Build yourself maybe another service drive that would be separated maybe for just the Genesis people?’ And if there’s additional investment involved in that, we’d participate in that additional investment.”

The HMA CEO estimates it will take at least two years to work through state franchise laws and finalize dealer sales and service agreements to establish stand-alone Genesis stores. In the meantime, the G90 will be sold in a showroom-within-a-showroom setting, although if a dealer had an empty used-car building on his lot with the same address as the Hyundai new-vehicle store, that could work too.

“I think you’ll see some of that happening right away,” Zuchowski says.

Getting dealers ready to sell the Genesis lineup and elevate the customer experience beyond that of Hyundai is the No.1 challenge the startup luxury marque faces, he says. Training is under way, and a Genesis ambassador or specialist is being designated on the sales and service side at the roughly 350 stores selling the G90.

Training is where Hyundai may struggle, he admits. Genesis, with projected U.S. sales of 90,000 by 2021 representing only 5% of Hyundai’s total U.S. volume.