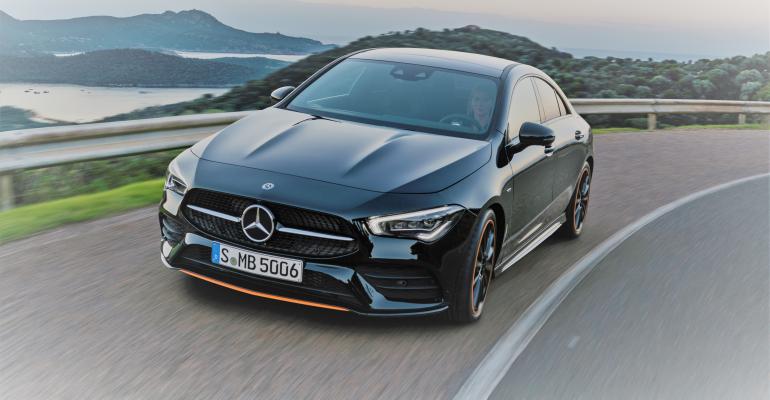 The second-generation Mercedes-Benz CLA, the latest in the automaker’s lineup of eight compact models, is introduced at the Consumer Electronics Show in Las Vegas.

Ola Källenius, Mercedes-Benz board member for R&D, lifts the veil on a larger and more comprehensively equipped 4-door model due to go on sale in September in North America at a starting price described as being close to that of its predecessor.

All five of Mercedes-Benz’s new compact models are built around a heavily upgraded front-wheel-drive platform known as the MFA (Modular Front Architecture) structure, with three more set to be unveiled in 2019, Källenius says.

As with the first-generation model launched in 2013, the ’19-model-year CLA receives a distinctive exterior featuring a coupe-like profile with a heavily curved roofline, frameless doors and a relatively short trunk that slopes away at the rear.

The new CLA also adopts LED headlamps within a heavily tapered front end, a stretched six-window glasshouse intersected by wide B-pillars and wider haunches over the rear wheels than the model it replaces.

Aerodynamic developments include an almost completely flat undertray and so-called wheel arch spoilers that help smooth airflow within the wheel wells at speed. Still, the new 4-door can’t quite match the outstanding 0.22 drag coefficient of its predecessor, with Mercedes-Benz claiming a 0.23 Cd, due in part to the new CLA’s larger frontal area.

The new-look exterior is a further evolution of Mercedes’ so-called “sensual purity” design philosophy, with smoother and fuller forms replacing the taut surfacing treatment and heavily etched swage lines of the first-generation CLA. The design-led focus will distinguish the CLA from the A-Class sedan, similar to how the larger CLS sits alongside the E-Class farther up the automaker’s lineup, Mercedes says.

As with other recent new compact Mercedes models, the ’19 CLA is longer than the car it replaces. Length is increased 1.9 ins. (48 mm) over the first-generation model at 184.6 ins. (4,688 mm), making it 5.5 ins. (139 mm) longer than the recently introduced standard-wheelbase A-Class sedan.

Inside (below, left), the new Mercedes-Benz adopts the same contemporary interior appointments as other models based on the automaker’s MFA II platform. The dashboard is carried over from both the latest A-Class hatchback and the new third-generation B-Class. It features a large instrument panel with two digital displays, each ranging between 7.0 ins. (17.8 cm) and 10.3 ins. (26.2 cm) in diameter, depending on the specification. A head-up display is optional.

The CLA is the latest Mercedes-Benz model to adopt the new MBUX operating system, which includes touch, voice and gesture control as well as various Mercedes Me connectivity functions. It also comes with a raft of both standard and optional driver-assistant functions, some of which offer semi-autonomous features.

The new CLA is underpinned by a reworked version of its predecessor’s suspension. It uses a MacPherson-strut front suspension in combination with either a twist beam or multi-link setup at the rear, depending on the engine. Buyers can option the new model with adaptive damping control and choose 16-in. to 19-in. wheels. 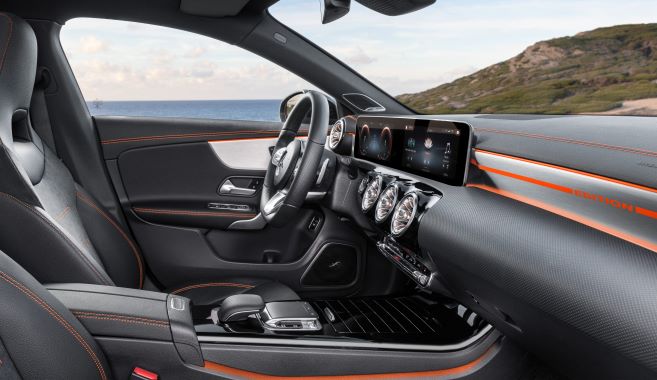 The increase in track width and reduced center of gravity is claimed to provide the new model with added agility and improved road holding. Mercedes-Benz also says ride comfort and overall refinement levels have been improved with reduced road-surface sensitivity and noise levels.

The engine lineup for the front-wheel-drive CLA is yet to fully revealed. The only confirmed unit is a turbocharged 2.0L 4-cyl. producing 225 hp and 258 lb.-ft. (350 Nm) of torque in the CLA 250. It will be joined by a range of gasoline and diesel engines with either a standard manual or optional dual-clutch automatic gearbox and, in selected models, Mercedes-Benz’s 4Matic system, which uses a multi-plate clutch to distribute power to all four wheels.

The automaker’s compact-model blitz is set to continue in 2019 with the launch of a second-generation CLA Shooting Brake, second-generation GLA and the new GLB compact SUV, described as a rival to the likes of the Audi Q3 and BMW X1.