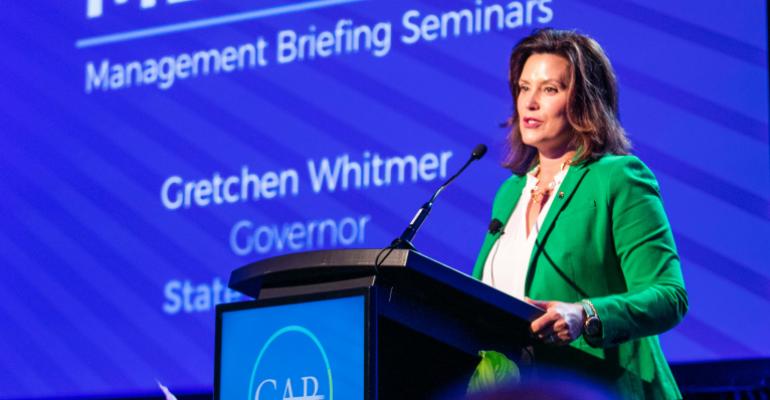 Joe Wilssens Photography, Inc.
“The fact of the matter is that an autonomous vehicle needs a safe, predictable road to travel on,” says Gov. Whitmer.
Industry News

TRAVERSE CITY, MI – As the auto industry develops autonomous vehicles, it is up to the State of Michigan to build advanced roadways that can accommodate the impending connected self-drivers, says Gov. Gretchen Whitmer.

“We are building cars of the future here,” she says during an appearance at the CAR Management Briefing Seminars here. “We can show our state is the capital of mobility, a state where mobility thrives.”

But, Whitmer adds, reiterating her catchphrase in a state with aging transportation infrastructure issues, Michigan must “fix the damn roads.”

She has proposed spending $2.5 billion to do that.

“We start by fixing the infrastructure,” Whitmer says. “A bridge is closed in this state every other week. But we need forward thinking when it comes to mobility. It’s not just about fixing potholes and laying asphalt.”

She describes roads of the future that “are connected, that support advanced technologies. These are critical pieces for strengthening our edge in mobility, but most importantly for keeping our people safe and making this a good place to do business.”

As her Republican gubernatorial predecessor, Rick Snyder, advocated at previous CAR conferences, Democrat Whitmer also speaks of the need to foster a better-educated state populace to fill high-tech and skilled-labor jobs, particularly in the auto industry.

In a brief Q&A with Wards after her MBS conference presentation, Gov. Whitmer talks about those roads of tomorrow. Here’s an edited version.

Wards: Is it overly ambitious to have connected roads vs. just fixing them in the first place?

Whitmer: We have been triaging roads by stealing money from the general fund to fill potholes, and using our kids’ education dollars to shore up the general fund. We’re certainly not rebuilding infrastructure in the way we need to.

It is an absolute necessity to make sure we are fixing the bridges across Michigan and rebuilding the roads that support cutting-edge technology. If we are going to retain our leadership in the mobility sector, we need the infrastructure to support it.

Wards: What would a future road look like? Would there be sensors?

Whitmer: There would be broadband connectivity so autonomous vehicles can communicate and travel safely. We are doing the testing. We are building the automobiles. But we need the infrastructure to support all of it.

Wards: How important will advanced road systems be to the autonomous-vehicle world?

Whitmer: They are critical. There are apps to tell you where a pothole is, but the fact of the matter is that an autonomous vehicle needs a safe, predictable road to travel on and the ability to communicate while it is on that road.