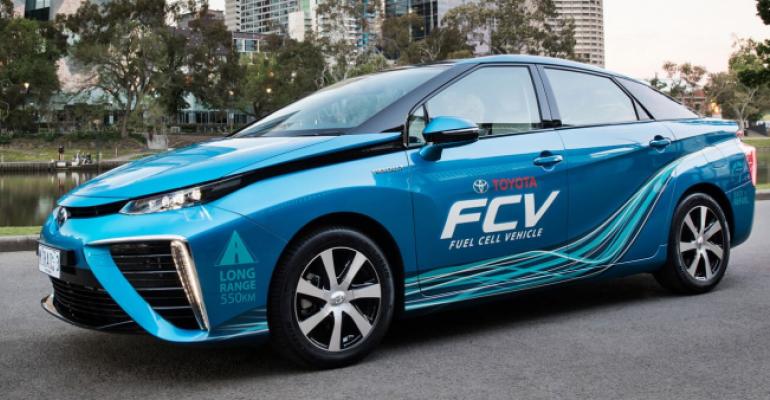 Hydrogen fueling station will be able to fill Mirai FCEV in three to five minutes.
Vehicles>Powertrain

Toyota Australia President and CEO Matt Callachor says the hydrogen center is a step toward meeting the automaker’s target of zero carbon-dioxide emissions from sites and vehicles by 2050.

Toyota Australia will build a A$7.4 million ($5.3 million) hydrogen center at its former manufacturing site outside Melbourne that will include Victoria state’s first commercial-grade fueling station.

Existing manufacturing infrastructure will be repurposed into the site, complete with electrolyzer and an education center with live demonstrations.

Toyota Australia President and CEO Matt Callachor says the center is a step toward meeting the automaker’s target of zero carbon-dioxide emissions from sites and vehicles by 2050.

It aligns with Toyota’s global drive to promote sustainable mobility and to play a leading role in the transition to a decarbonized future.

“Hydrogen has the potential to play a pivotal role because it can be used to store and transport energy from wind, solar and other renewable sources to power many things, including vehicles such as the Toyota Mirai Fuel Cell EV,” Callachor says in a statement.

“Right now, the biggest factor to the success of hydrogen being widely available is the lack of infrastructure.”

Miller says the center will demonstrate hydrogen as a viable fuel source for transport and as an energy-storage medium.

“Toyota is helping to pave the way for more renewably powered vehicles in Australia, where the uptake of EVs has been slower than other countries,” he says. “The demonstration of low-cost hydrogen production and distribution is key to the uptake of hydrogen-powered EVs in areas such as truck, bus and government fleets.”

Construction on the center will begin this year, with the education module expected to be open by December, and the electrolyzer and hydrogen refueling station fully operational by late 2020.

The fueling station will be able to fill a FCEV such as the Mirai in three to five minutes.