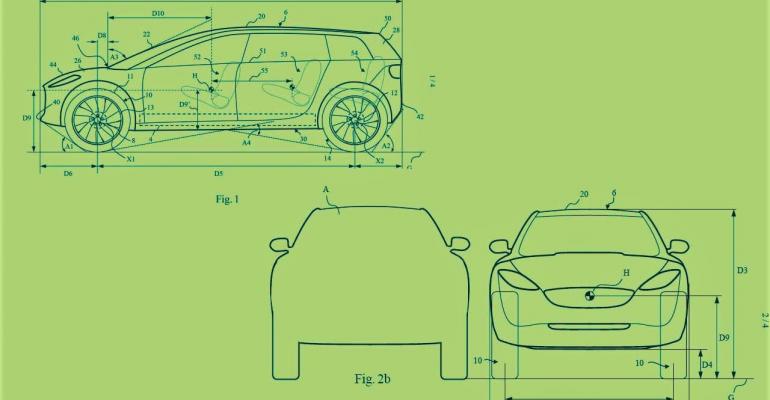 The patents include diagrams that make it appear the Dyson EV, to be built in Singapore, will look like a Range Rover. They show a car with a long wheelbase, an interior with reclining seats and an aerodynamic design.

Publication of patents gives the first details of the electric vehicle being planned by British vacuum-cleaner king James Dyson for launch in 2021 and come with a plea by Dyson for staff to keep the plans secret.

The patents include diagrams that make it appear the vehicle, to be built in Singapore, will look like a Range Rover. They show a car with a long wheelbase, an interior with reclining seats and an aerodynamic design.

The EV might also have large wheels, making it easy to maneuver in city and rough terrains.

In an emailed memo sent to employees and seen by Bloomberg and The Telegraph newspaper, Dyson reveals early details about the car.

He says the patents don't reveal what the vehicle actually will look like or provide specifics of what it will do, but they offer a glimpse of some of the inventive steps being considered.

Advances will come in the aerodynamics, efficiency and vehicle architecture.

It also is expected to be a normal-sized car, with the staff memo saying Dyson isn’t following other brands’ designs for smaller EVs because the ride comfort of those vehicles tends to limit their attractiveness and utility.

In his email, Dyson says testing of the car will ramp up next month.

Dyson announced his EV plan in 2017 and says he will spend £2 billion ($2.6 billion) on the project, including a facility in Singapore to build the car. He has 500 staff designing the car in-house.

Dyson’s memo says the EV is on track for a launch in 2021 for a car “entirely designed by Dyson, manufactured by Dyson and sold by Dyson.”