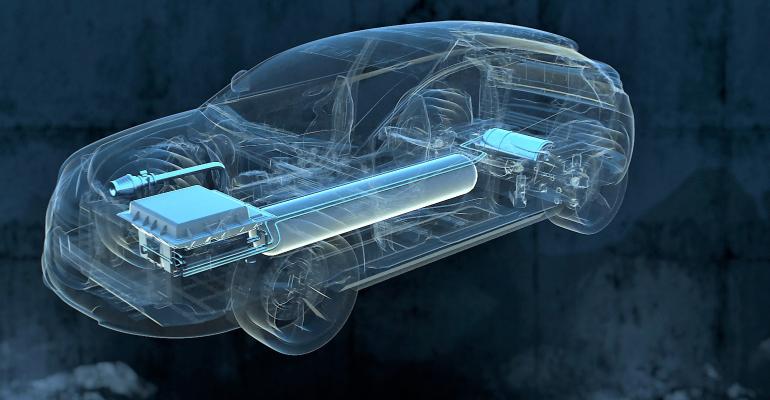 Faurecia, the French supplier of automotive components, is pushing ahead with the development of fuel-cell technology that could be adapted to existing vehicles as well as cars and trucks of the future.

Andrew Pontius, vice president-North American light-vehicle product lines, tells Wards the company has a history of working on emission-related technology that is now expanding. “We recognized we had to make an electrification play in a zero-emissions arena,” he says.

While fuel-cell technology is still expensive, the price of full-cell stacks is dropping, and application of the technology is growing more flexible as development continues.

Moreover, fuel cells have the potential to increase battery-electric vehicles’ range and make it easier to recharge them, Pontius says.

Faurecia and Michelin in November created a 50-50 joint venture around Symbio, a company they jointly acquired, to develop fuel-cell technology, he says.

In one of the JV’s first projects, 200 Renault delivery vans outfitted with fuel cells (left) are being tested in sections of Paris where zero-emission vehicles are mandatory. The fuel-cell system has extended the vans’ electric range from 75 miles (120 km) to 186 miles (300 km), Pontius says.

The fuel-cell stacks used in the Renault vans serve as range extenders rather than as a direct source of propulsion. The electricity produced inside the fuel cell, which is slightly smaller than a box of copy paper, recharges the battery that drives the van’s electric motors, he says.

“It’s very similar to taking a small (internal-combustion) engine and using it to recharge the battery,” Pontius says. “But we do it with the fuel cell. You don’t need a generator.”

The system includes a lightweight hydrogen storage tank which also can fit into existing vehicles. Symbio claims the tank can be recharged with hydrogen in about three minutes.

Pontius says large commercial vehicles likely will use fuel cells, but smaller, more flexible systems should appear within the next decade. Moreover, the fuel-cell stacks are getting smaller so they use less rare-earth metal, making them less costly to build.

Using a fuel cell as a range extender rather than as the primary source of power helps minimize another potential problem. “A fuel cell is not nearly as dynamic a power source as a battery. I don’t expect to see a fuel-cell vehicle without a battery,” says Pontius (below, left), noting Faurecia has become an expert in building the packs that hold batteries used in electric vehicles. “We reduced the mass of the boxes by 10% to 20%,” he says.

The fuel-cell research doesn’t mean Faurecia is walking away from its internal-combustion exhaust business. 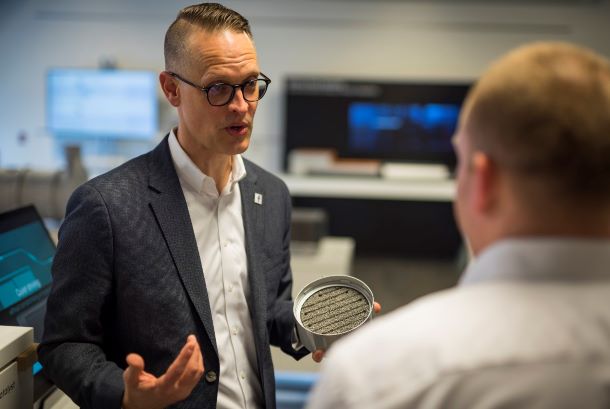 Cummins, a major manufacturer of diesel engines for trucks and heavy equipment, has begun using a new system that basically condenses what amounted to two large tanks into one efficient unit that neutralizes the output of oxides of nitrogen.

The system for commercial diesel-powered vehicles is in production at a Faurecia plant in Columbus, IN.

Faurecia also has developed an electrically heated catalyst that can be used on plug-in hybrids and other vehicles. Until now, one problem with hybrids and plug-in hybrids is that they start operating in electric mode but if the driving cycle demands more power, the combustion engine will turn on before the catalyst heats up.

“The emission load would go way up and your catalyst is cold,” Pontius says. “Our answer to that is an electrically heated catalyst. It’s still in development, but we see it as answering a big industry need (with) plug-in hybrids or even mild hybrids.”

Catalysts now use heat from the engine to warm up, but an electrically heated catalyst that fires up instantly could be moved further downstream from the engine, increasing the life of the catalyst. The catalyst also could be made more durable using fewer precious metals, which are expensive, Pontius says.