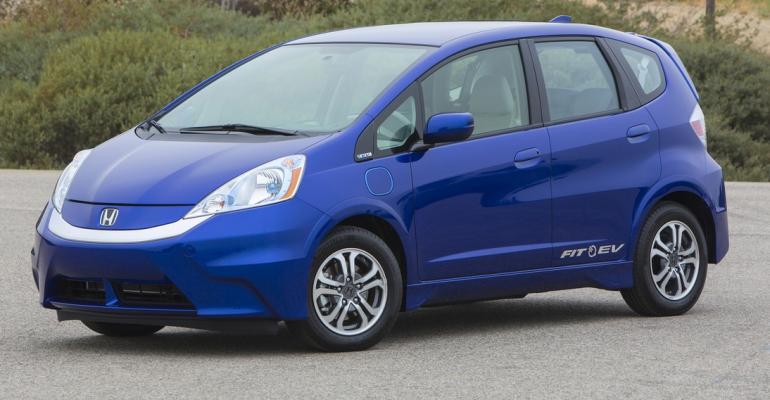 Owners of Fit EV, no longer on sale, can earn money for not charging.
Vehicles>Powertrain

To De-Stress Grid, Honda Rolling Out Smart Charging in California

TRAVERSE CITY, MI – With sales of battery-electric vehicles expected to increase in the coming years, along with the need to charge them, Honda is turning an eye toward protecting the power grid.

“(The utilities) can predict a lot of power demand in areas because they have history, but (vehicle charging is) throwing enormous randomization on top of it,” Steve Center, vice president-Connected and Environmental Business for American Honda, tells Wards on the sidelines of the 2018 CAR Management Briefing Seminars here.

To help avoid brownouts and prevent excess carbon-dioxide emissions at various utilities in the state of California – as well as aid in its own goal to reduce CO2 emissions – the automaker is starting a beta program for Honda Fit EV owners using Apple devices.

Called SmartCharge, the Honda program uses the Fit EV’s onboard telematics system and eMotorWerks’ JuiceNet software platform to compute optimal vehicle charge times. Charging will or won’t occur depending on a driver’s daily schedule, how much renewable energy is being generated and how much CO2 is being emitted on the grid.

eMotorWerks, Honda’s Demand Response Provider, gets real-time grid information via the cloud from the California Independent System Operator (CAISO), the overseer of California’s bulk-electric power system and transmission lines. On its website, CAISO says it delivers wholesale electricity to local utilities for distribution to 30 million customers. Its grid includes 75% of California and a small section of Nevada and delivers 260 MWh of electricity each year.

Says Center: “What this does is it kind of fuses the need for the grid to minimize stress and the CO2 it creates and the connectivity with the cars. When the grid is stressed it sends out a signal, ‘Back off, back off,’ (and) the cars are capable of pausing their charging.’”

While there are smart chargers, this is smart charging, Center says, agnostic of whatever brand of charging unit a Fit EV owner may be using. The ability for the car to back down on charging during peak grid demand can occur wherever a Fit EV is plugged in: Costco, Whole Foods, a Honda dealership or at home.

Another aspect of the beta program is the ability for those participating to get paid for not charging. Once they receive “utility approval” from eMotorWerks and complete five charge sessions, customers get an unspecific monetary reward for signing up. They can collect additional rewards based on how often they participate in the program over a two-month period.

“It’s a way of being grid-friendly…and, also, the Honda customer makes a couple of bucks for doing nothing,” Center says.

The ability for the Fit EV to back off on charging will not result in a half-full battery pack, as Honda promises the car will be “fully charged when the customer needs it next without impacting their use of the vehicle.”

After the car backs off, “then the grid will say later, ‘All clear’, and go back to charging,” Center says.

While the program is open only to Fit EV owners, Honda is studying expanding it to the new Clarity EV and Clarity plug-in hybrid.