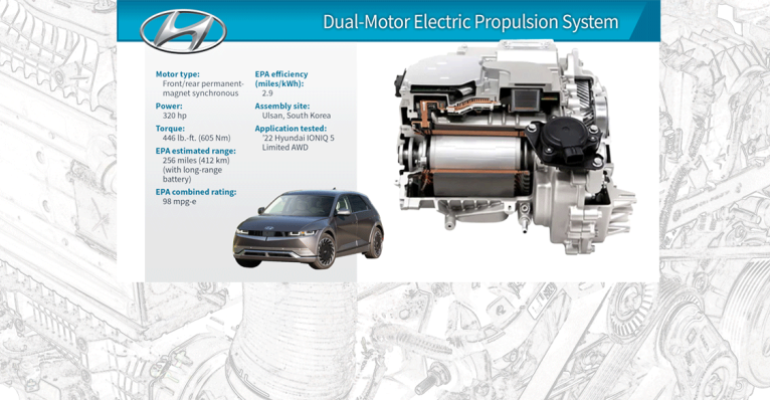 Hyundai’s new battery-electric CUV rides on a modular architecture that will underpin more than a dozen new BEVs from the Korean automaker.

While we still love the prior generation of Hyundai’s battery-electric-vehicle technology – as evidenced by the three straight wins we bestowed on the Kona Electric’s propulsion system – the new Hyundai Ioniq 5’s drive unit takes things to the next level and earns a place on our 2022 Wards 10 Best Engines & Propulsion Systems list.

The Ioniq 5 is an all-new battery-electric CUV based on Hyundai’s innovative new Electric-Global Modular Platform (E-GMP) – the basis for more than a dozen current and future BEVs from the Hyundai, Kia and Genesis brands.

E-GMP innovates by placing the motor, inverter and transmission into one Power Electric (PE) unit. Integration of the motor and inverter allows for an internal connection vs. connection with an external cable seen in BEVs based on internal-combustion-engine platforms. This in turn allows for smaller-sized components and frees up space in the vehicle for front-trunk storage, even in the all-wheel-drive Ioniq 5.

The shrinking of those parts also lowers weight, the enemy of efficiency.

Hyundai also innovates for efficiency with its EV transmission disconnector technology, physically connecting and disconnecting drive motor and drive axle in AWD models. The technology can improve range 6%-8%, as it prevents drag load from the front-wheel PE system while also allowing for more dynamic driving.

While the rear-wheel-drive Kona Electric, released in 2018, still has one of the best ranges for BEVs available in the U.S. – 258 miles (415 km) – the Ioniq 5’s upper RWD grade exceeds it. It tops out at 303 miles (488 km), one of the longest ranges yet in a BEV from a Big Seven automaker and on par with range in Teslas.

The Ioniq 5 also has a standard 800V electrical architecture across all grades, a rare feature for a non-luxury BEV and helping the CUV juice up quickly on new ultra-fast DC chargers, taking its battery pack from 10% to 80% in as little as 18 minutes at a maximum speed of 235 kW.

In AWD Ioniq 5s, power and torque come courtesy of two motors, a 165-kW unit in the rear and a 74-kW motor on the front axle.

Popping the vehicle into Sport mode transforms the CUV from “relatively sedate” in Eco and Normal modes to “speed demon.”

“It jumps off the line with the best of performance cars,” judge Dave Zoia says of the Ioniq 5’s torquey character. Judge Bob Gritzinger liked the CUV’s ample power, noting it “never runs out of juice,” while judge Drew Winter summarizes: “The Ioniq 5’s propulsion system doesn’t just sell the car. It redefines what a car can be.”