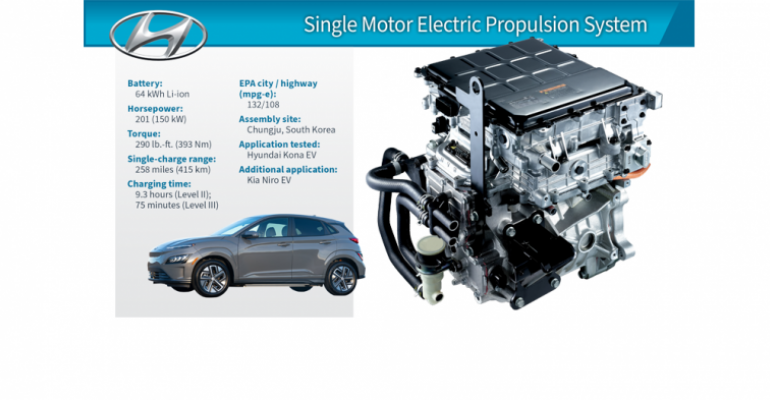 The South Korean automaker’s 3-year-old battery-electric crossover still is a standout in terms of performance, range and price.

The 2021 Wards 10 Best Engines & Propulsion Systems are being revealed in random, non-alphabetical order one per day until September 24. This is the second winner profile.

While that might be surprising given how many BEVs have come to market in the three years since the Kona’s fall 2018 debut, the Hyundai model still has one of the longest ranges of any all-electric vehicle on sale in the U.S.

Yes, even newer BEVs such as the Chevrolet Bolt EUV and the luxury Polestar 2 and Porsche Taycan can’t match the Kona’s EPA-estimated 258 miles (415 km) of range on a fully charged battery.

And making the Kona an even sweeter proposition in the BEV world, several of our judges once again saw ranges exceeding the EPA estimate thanks to just-right charging conditions in the spring of not too hot/not too cold weather, something we don’t always see with other BEVs.

Also unlike some other BEVs, the Kona’s range is wonderfully sticky because of its great regen capability, with yours truly adding 1-to-4 miles (1.6-6.4 km) at various points in my drive.

By engaging Eco drive mode and Level 2 regen (medium motor drag) via braking paddles, I lose just 8 miles (13 km) of range despite traveling 23 miles (37 km), going from 90% state-of-charge on the Kona’s 64-kWh Lithium-ion battery pack to 84% SOC. And I had the air conditioning on!

Judge Jim Irwin concurs with the range-retention ability of the Kona Electric. “My miles driven ran well ahead of the amount of charge I used,” he says.

The CUV was refreshed for ’22 but its propulsion system remains intact because, well, if it ain’t broke, don’t fix it.

The Kona’s 150-kW (201-hp) permanent magnet synchronous motor making 290 lb.-ft. (395 Nm) of instant torque still makes for exhilarating acceleration. Even at half-open throttle in Normal or Eco modes you fly, while Sport mode with the accelerator floored is a startling event. 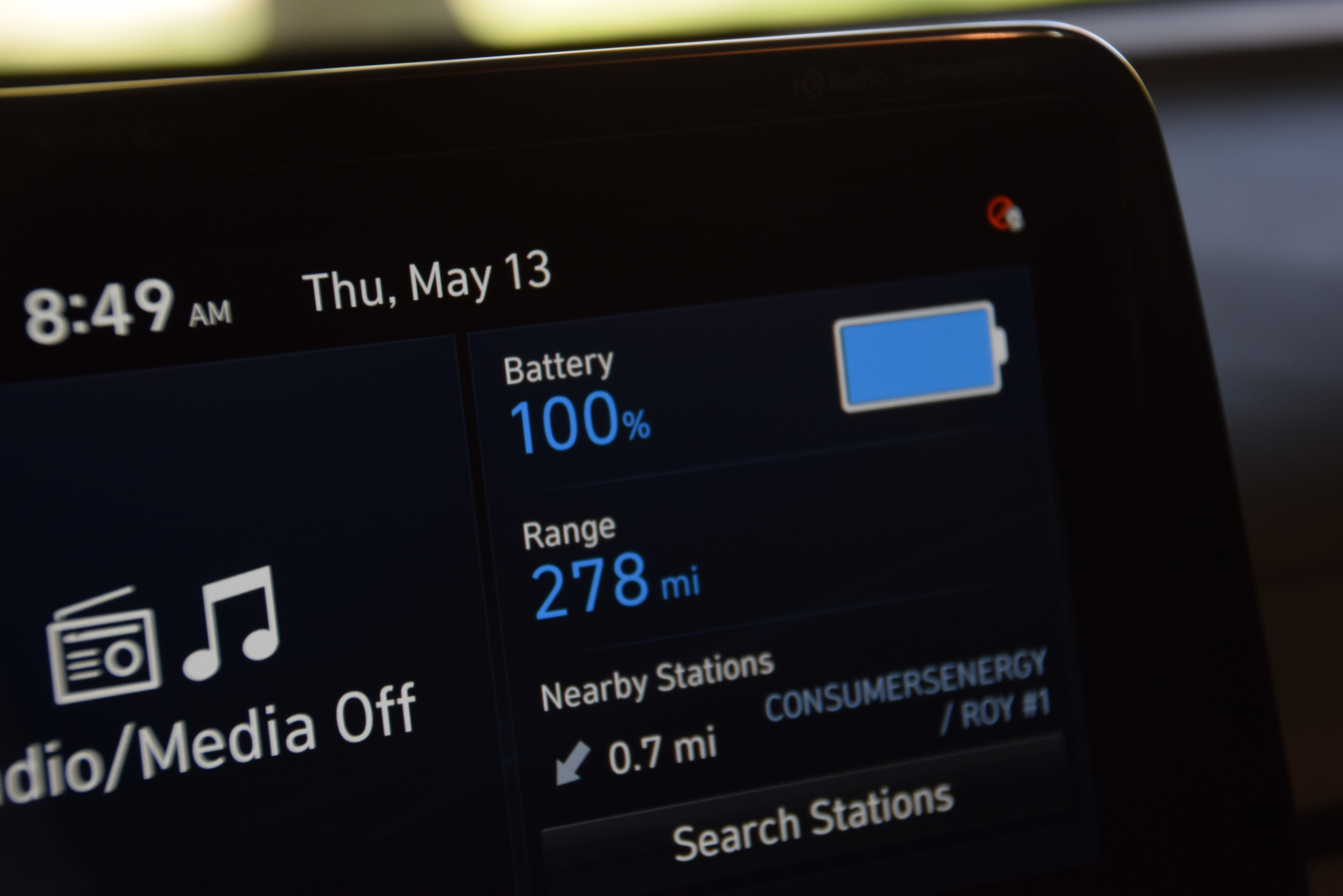 “Impressive jump off the line and continues to pull at beyond-legal speeds,” says judge Dave Zoia, adding, “Honestly, in real-world driving and barring handling, it was hard to distinguish this from the Porsche Taycan.”

Sums up judge Drew Winter of the Kona Electric: “There are a lot of excellent BEVs entering the marketplace now, but they are aimed at affluent buyers. If BEVs are going to gain significant market share there have to be more affordable, fun-to-drive models with ranges exceeding 250 miles in the real world. The Kona Electric checks all these boxes.” 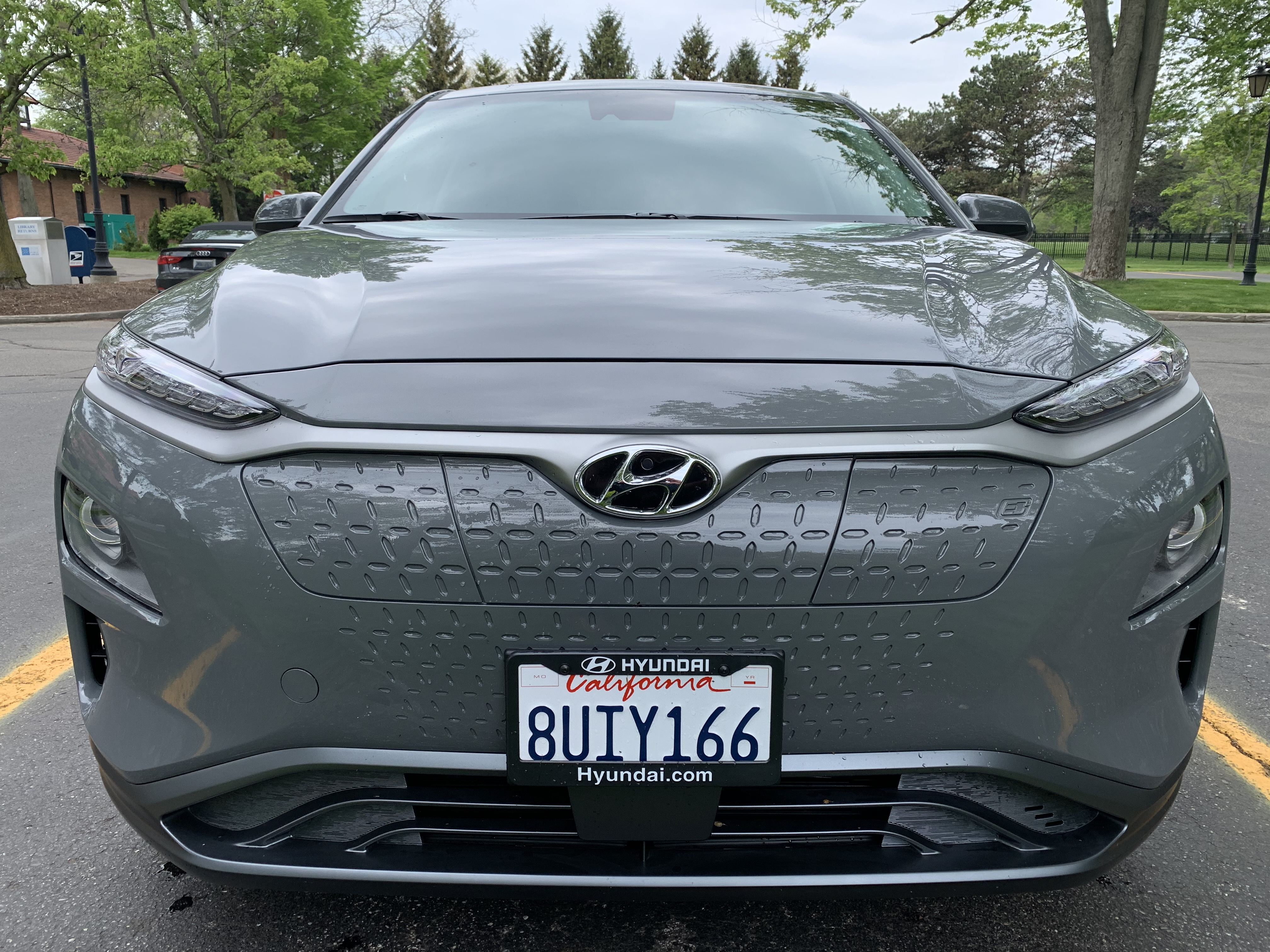 “My miles driven ran well ahead of the amount of charge I used,” judge Jim Irwin says of Kona test drive.