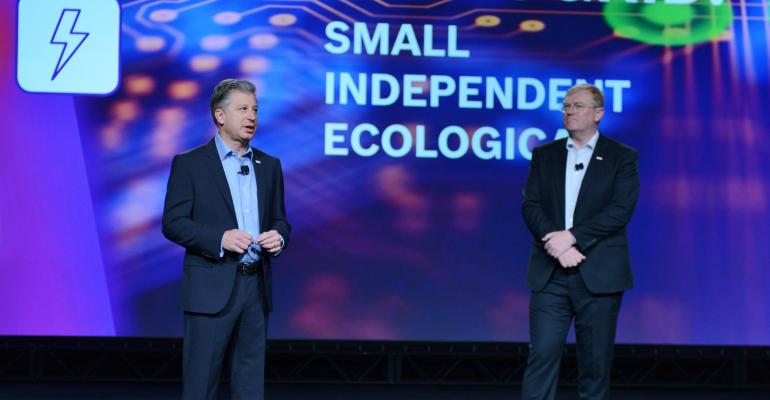 In community-based parking, Bosch technology takes over the search for a parking spot. It works by cars automatically reporting vacant spaces to the cloud as they drive past.&nbsp;

LAS VEGAS – In the auto industry, Bosch is known as a major Tier-1 supplier of automotive parts, from complex fuel-injection systems to windshield wiper blades.

But like most major auto suppliers, the German parts producer now is leveraging its expertise in such things as sensor technology and software to expand its horizons far beyond the automotive realm.

In a joint keynote address Monday at CES, Stefan Hartung, member of the board of management of Robert Bosch GmbH and Mike Mansuetti, president, Bosch in North America, outlined Bosch’s vision for future, with much of it aimed at the so-called smart cities market.

It includes a significant role for automotive-related technologies in terms of reducing pollution and urban congestion but has many other elements that tap into Bosch’s strengths in other areas such as micromechanical sensors, which it produces in huge quantities.

Globally, the smart city market is booming, with sales expected to grow 19 % each year, reaching as much as $800 billion worldwide in 2020. By 2025, at least 80 urban areas worldwide will be smart, Mansuetti says.

“Some places are already synonymous with smart-city initiatives: Barcelona, Seoul, London or Columbus, Ohio, which as you may know, was the winner of the U.S. Dept. of Transportation Smart City Challenge,” Mansuetti says.

Around the globe, cities of all sizes are investing in and reaping the benefits of numerous smart technologies, including the city of Las Vegas, which recently announced a $500 million dollar investment in smart city infrastructure over the next seven years.

“One reason the smart city initiative is taking off now is because we have the right technology,” says Hartung. “The arrival of the (Internet of Things) a few years ago, with its innovations in sensors, artificial intelligence, big data, and predictive analytics, means that many smart city initiatives are for the first time not only possible, but economically viable.”

Hartung says cities are realizing that technological solutions could hold the key to solving many of today’s pressing urban problems, as well as tomorrow’s.

The world is becoming increasingly urbanized. By 2025, 34 cities worldwide will have a population of more than 10 million people, the executives say.

By 2050 at the latest, two-thirds of the world’s population will be living in these megacities, putting a tremendous amount of pressure on local infrastructure, the environment and ultimately on quality of life, whether the air we breathe, the time we waste in traffic, the energy we consume, or our safety. Smart city technologies offer a way of confronting these challenges, and of mitigating their impact, the executives say.

“Above all, they help make cities, and towns, and neighborhoods, better places to live. We’re pursuing exactly this aim in 14 smart-city beacon projects around the world, for example in Tianjin, China, Berlin, Germany, and San Francisco, California,” Hartung says.

“Smart cities begin and end with connectivity. Our solutions not only encompass connected mobility, energy, building, and industrial technology, they enable connectivity at the most fundamental level. Nearly 50 years ago, we introduced semiconductor technology for automotive applications. Today we’re the leading global producer of micromechanical sensors, shipping more than four million a day,” Hartung says.

“You could say that our sensors are the eyes and ears of the connected city. In this case, its brain is our software. Of Bosch’s nearly 400,000 associates worldwide, more than 20,000 are software engineers, nearly 20 % of whom are working exclusively on the IoT. We supply an open software platform called the Bosch IoT Suite, which offers all the functions necessary to connect devices, users, and companies,” Mansuetti says.

Bosch increasingly is bringing artificial intelligence into play as well, Mansuetti says. At the start of last year the company opened a dedicated AI research center, which employs some 100 experts at three locations, one of them in Silicon Valley.

Since 2016, Bosch has been operating its own IoT cloud in Germany. Over the past 18 months, it has implemented some 100 IoT projects and connected 1.5 million vehicles with IoT software. Later this spring, Bosch plans to launch the Bosch cloud in North America and the executives say they intend to make all the electronic products in the company’s portfolio web-enabled.

One of the specific technologies Bosch is working on now is a real-time climate monitoring system called Climo. Most such systems are expensive and the size of a semi-size shipping crate. Bosch’s system is 1/100 the size and 1/10 the cost. The data they collect can help in organizing traffic flow and in future policy making, the company says.

Another solution Bosch has come up with is called community-based parking, where Bosch technology takes over the search for a parking spot. It works by cars automatically reporting vacant spaces to the cloud as they drive past.

After a successful pilot phase, the company is planning to launch community-based parking in 20 U.S. cities this year. In places such as L.A., Miami, and Boston, real-time information about on-street parking will be made available to automakers. Drivers will be able to see on their navigation systems where there’s a free space and drive directly to it, which will save them time, fuel, and stress, while reducing congestion and pollution in downtown areas, the executives say.

The latest innovation is called automated valet parking. Cars drive themselves into parking garages and then find parking places on their own.

Hartung insists these smart city ideas are no Utopian vision. “It’s here and communities around the globe already are reaping the benefits,” he says. However, he also admits the challenges going forward are formidable.