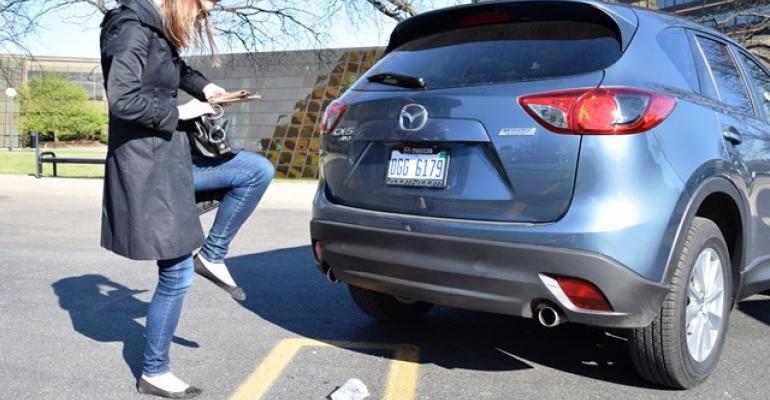 Editor Christie Schweinsberg details her annoyances with various interior features for this year&rsquo;s judging, then takes an aspirin.

After four years of reviewing vehicles for our 10 Best Interiors awards, I know what I like and what I don’t like.

So herein is a list of my vehicle-interior pet peeves, in no particular order. I submit this list with the hopes that the appropriate officials at automakers will see it, absorb it and make the necessary changes to their models because, damn it, I’m sick of stretching for that tune knob!

The proximity key is one of my favorite inventions of recent years. With my own car, my keyfob almost never leaves my purse. I enjoy the convenience of going up to my driver’s door, hitting a button on the handle and entering. Which is why vehicles with off-center tailgate or trunk releases annoy me so. More than once during this vehicle testing cycle I needed to open a tailgate/trunk to load up groceries, and more than once I was forced to feel around above the license plate, fingernails scraping metal and plastic coated with road salt and other assorted winter muck, for the confounded release. Unable to find it, I was left with two choices: squatting down in a grody parking lot and craning my neck to look for it, or zipping open my purse, balancing it on one knee while I hopped on the other leg, rummaging around for the keyfob.

I’m a tall person, and as such the distance from my hips to my knees is greater than that of the average driver. While automakers are getting better at this, I still find bottom seat cushions that are too short to adequately support my upper legs. In some vehicles I tested there was a good 3-4 ins. (8-10 cm) of space from where the bottom cushion ended to the crook of my knee. #nothighsupportsucks

Virtually no one smokes in their cars anymore. At least not anyone who wants to realize a decent resale value. So why do automakers still insist on loading up today’s vehicle interiors with 10V, cigarette-lighter sockets? I don’t want to buy a friggin’ adapter! I just want to take my phone charger from my house and plug it in…to an actual outlet! A few vehicles we tested had one 120V power outlet, but most had none.

One Set of Seat Releases…in the Cargo Area

It felt like every vehicle we tested this year was a CUV or SUV. Not quite, but we did look over an awful lot of them. And one thing stuck out with many, including the $93,000 Cadillac Escalade: to put the third-row seats down, you had to get out of the warmth of the vehicle (remember we test in February and March in Michigan), go around back, open the tailgate and then reach inside and hit or hold down the seat release buttons to fold flat the third row. How about some controls up front?

I’ve never been diagnosed by a professional, but I’m pretty sure I have that fragrance-sensitivity disorder. In my house I’ve eliminated most unnecessary fragrances for this reason. So I was simultaneously revolted and dazzled when I climbed in our Mercedes S-Class coupe tester. The interior? Utterly gorgeous. The signature scent? Where’s the sick bag? I’m told the intensity can be adjusted, and it looks like the bottle of Eau de Benz, in the car’s glove box, can be unscrewed. But it still, er, stinks to climb into the equivalent of a department store perfume counter.

I’m expanding my evergreen gripe about tune knobs placed on the upper right corner of the center stack to include all controls that are too far away from the driver. This year I encountered a number of models whose touchscreen was not only at the top of a tall center stack but also, bafflingly, tilted back. If I need to lean forward in my seat to reach a knob, button or touchscreen, or worse, unbuckle my seatbelt while leaning forward, how do the short-limbed people cope?