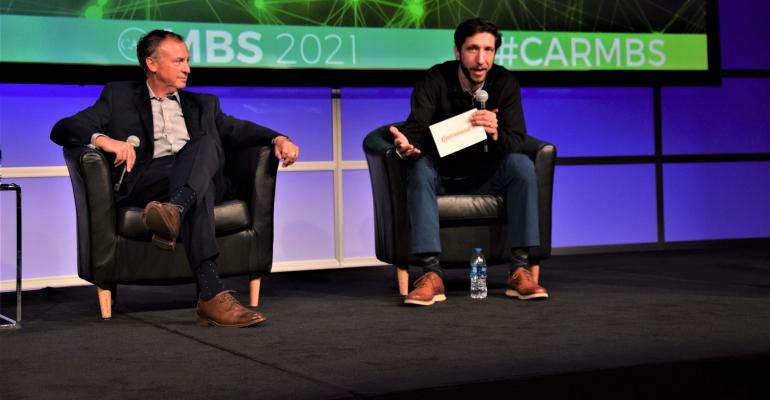 TRAVERSE CITY, MI – For consumers to accept electric and autonomous vehicles in greater numbers, the auto industry and stakeholders need to set realistic goals and be transparent about the capabilities and drawbacks of each, plus help educate car buyers.

“Let’s get out of the fairytale side,” Bryan Reimer, research scientist at MIT’s AgeLab says of unrealistic goals or headlines that consumers may see and government or industry may promote.

Steve Patton, principal-Ernst & Young, says via a new survey his firm has established, the Mobility Consumer Index, acceptance for EVs is growing. Among 9,000 respondents in 13 countries, 42% globally (29% in the U.S.) say they are considering an EV in the next 12 months, a good sign that acceptance is growing and “a wave (is) coming,” he says.

However, Patton notes respondents are worried about the cost of ownership of an EV, specifically the cost to install a Level 2 (240V) charger at their residence, as well as finding public charging outlets. He says 23% of survey respondents who own an EV said they wouldn’t buy one again due to anxieties about where to charge.

“It would be a real shame if the infrastructure becomes the impediment for EV evolution,” Patton says. “The technology is what we’ve been improving, and now we’ve got to get to a point where the infrastructure to support that technology doesn’t become a constraint. And we can’t solve that overnight. It takes time and it takes a lot of money to build that infrastructure out.”

Given the relatively scant charging infrastructure in the U.S., MIT’s Reimer says hybrid technologies and even internal-combustion-engine vehicles are going to make sense in certain environments. “Ignoring that now is deflating one of the key aspects of consumer interest and consumer demand in the not-so-distant future,” he says.

On the autonomous-vehicle side, despite a slew of advanced driver-assist systems (ADAS) on vehicles today, research has shown they are not always used or understood, and are not stemming roadway fatalities.

“Having 100 people die a day is just unacceptable for us,” says Mark Rosekind, chief safety innovation officer-Zoox, of a huge issue the industry has yet to solve despite decades of investment and R&D into making vehicles safer. Important to note is 100 per day was roughly the motor-vehicle-crash death rate in 2019, but in 2020 the National Safety Council estimated 42,000 Americans died in vehicle crashes. The fatality rate increase from 2019 to 2020 was the highest year-on-year rise since 1924.

“People don’t even know what they’ve got in their cars today,” Rosekind says of the slew of ADAS technologies such as adaptive cruise control, lane-keeping assist and blindspot detection currently available in many new vehicles.

That contention is supported by MIT’s AgeLab, which leads an Advanced Vehicle Technology Consortium with 20 different automakers or stakeholders in the autonomous sector to find out how people are leveraging currently available production-level automation systems.

MIT’s Reimer says in many situations the specifications and designs the industry has developed aren’t “understood well enough to get proper, effective use out of the technologies we’re placing on the road.” To mitigate issues with current ADAS technologies and enhance their appropriate use, engineers are going to have to work in a much more iterative, incremental framework, he says.

As an early developer of ACC and someone who’s spent years in the ADAS side of the business, Continental North America’s Zachary Bolton, head of R&D for Holistic Engineering and Technologies, believes education is key.

While information about what ADAS tech can and can’t do is often placed in an owner’s manual, he knows few vehicle owners actually will crack them open and spend time learning about their vehicles’ safety technology.

He says that’s why Continental is taking part in the #safelythere campaign on social media, to spread the word on 35-plus different safety systems already in the market, which should help decrease the confusion that even Maya Pindeus, CEO-Humanising Autonomy says she encounters with today’s ADAS.

Pindeus advocates for regulators, who she says play an “incredibly important role” in getting these systems to fruition, to set more realistic expectations than Level 4 or Level 5 may conjure up in consumers’ minds.

“Vision Zero is a great initiative … but what can be achieved in a shorter timeframe?” she says of the goal many cities globally are working toward for zero automobile-related deaths on roadways.

Continental’s Bolton advocates for more connectivity between the vehicle and surrounding infrastructure, as well as cyclists and pedestrians, to help stem deaths, while MIT’s Reimer sees smaller goals, such as 2% or 5% reduction in deaths on roadways, as more achievable and helping keep consumer expectations in check.