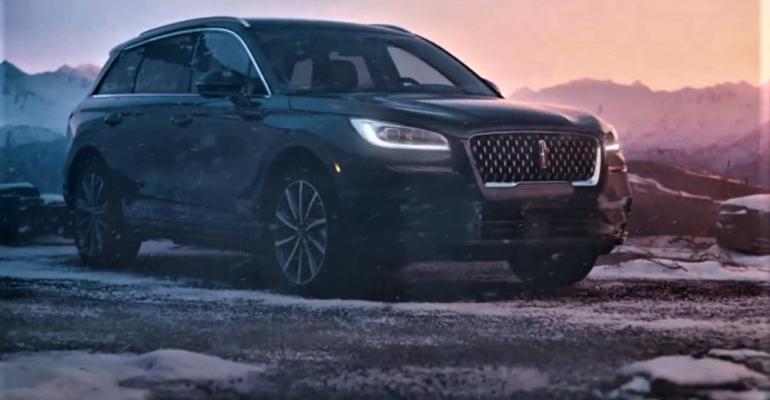 According to iSpot’s Ace Metrix, the Corsair ad scored above the norm across all industries, scoring high with viewers for attention, likability, watchability and desire.

Lincoln takes first place in iSpot.tv’s latest ranking of the most-viewed automotive commercials – the ads that have made the most impressions across national broadcast and cable TV airings.

The No.1 ad for the week of Jan. 18 features the Lincoln Corsair and claims that even in extremely cold climates, its vehicles provide optimal comfort.

According to iSpot’s Ace Metrix, the Corsair ad scored above the norm across all industries, scoring high with viewers for attention, likability, watchability and desire. Viewers described it as “soothing” and “cinematic,” and considered the visuals the best thing about the commercial. Brand recognition for Lincoln registered at 86% of viewers.

Chevrolet owns both second and third place on the ranking. At No.2 is its spot for the ’21 Silverado Trail Boss, which is ready to go off-road right out of the factory. This commercial scored above average for attention, likeability and information. Viewers considered the visuals and the product itself to be the best things about the ad.

Chevy’s third-place spot, which highlights various models, also scored above-average with 30% of viewers considering the visual scenes the single best thing about it. Brand recognition for Chevrolet clocked in at 85%.

The No.4 spot from Lexus explains how it’s gone all-in on the ’21 IS sports sedan, featuring a lower center of gravity, more responsive suspension and a wider stance. Brand recognition for this commercial hit 91%, with viewers ranking the visuals and the product itself as the best things about it, per iSpot’s Ace Metrix.

Subaru rounds out the ranking with its commercial for the Crosstrek, which viewers found to be “heartfelt” with a strong narrative. The characters – a woman and her granddaughter – were viewers’ favorite things about the spot, and Subaru branding was recognized by 84% of viewers.

Attention Index - Represents the Attention of a specific creative or program placement vs the average. The average is represented by a score of 100, and the total index range is from 0 through 200. For example, an attention index of 125 means that there are 25% fewer interrupted ad plays compared to the average.