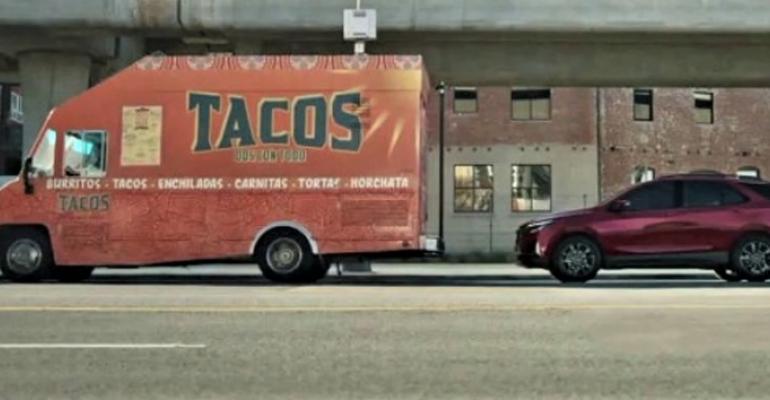 Although both ads leaned heavily on last weekend’s NFL playoff games to deliver the views, Chevy had the stronger result, with nearly twice as many NFL-generated impressions as Nissan.

The chart debut of Chevrolet’s “Taco Truck” spot claims the top spot in iSpot.tv’s ranking of the most-viewed automotive commercials – the ads that have generated the most impressions across national broadcast and cable TV airings.

Results for the week of Jan. 17 show the race for the lead was close, as Chevy bumped Nissan’s “Electric Cars for Electric Drivers” down to No.2 by less than 600,000 impressions.

The spots were neck-and-neck in terms of viewer reaction as well, according to iSpot’s Ace Metrix survey data, with an overall viewer rating above industry norms of 7.3% for Chevy and 8.4% for Nissan. Nissan won the “attention” category, scoring 4.5% above industry norms, while Chevy had the edge in “likeability” with 3.7%.

Although both ads leaned heavily on NFL playoff games to deliver the views, Chevy had the stronger result, with nearly twice as many NFL-generated impressions as Nissan.

In fact, last weekend’s dramatic NFL playoff games delivered the vast majority of views for all spots on the list, save one. That would be Subaru’s “Well Adventured,” a chart debut at No.4. The automaker had the lowest estimated national spend on the list, with only $1.7 million –compared to the estimated $6 million Lexus spent on airing “Hustle,” at No.3 – and directed it at morning news and crime dramas instead of the NFL playoffs.

Closing out the list was Toyota’s high-energy “Find Your Groove.”