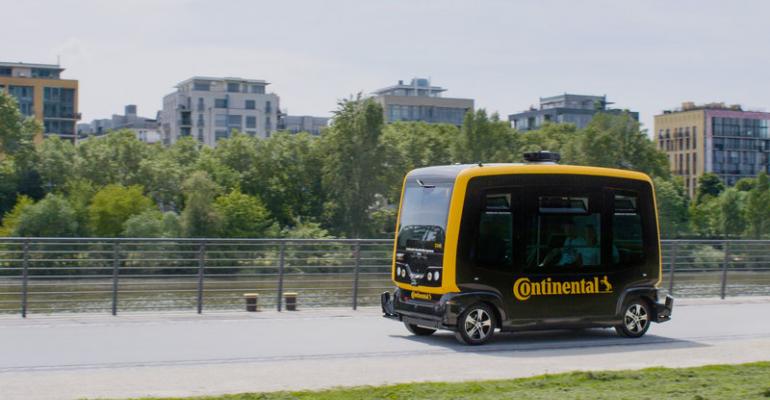 By 2025, Continental sees the global market for automated driving technology to be worth &euro;30 billion ($36 billion).

“Referring to assisted automated driving, we had sales of €1.2 billion ($1.4 billion) last year, corresponding to a market share around 15%, which we believe we can at least hold or expand in the next years,” Elmar Degenhart, the supplier’s CEO tells the crowd. “And the market will go up to a range of around €15 billion-€17 billion ($18 billion-$20 billion) by 2020, so it will double more or less in the next five years between 2015 and 2020. We believe that the market can double again between 2020 and 2025.”

By 2025, Continental sees the global market for automated driving technology to be worth €30 billion ($36 billion).

With that in mind, the supplier unveils a range of technologies here, both before and during the show, to feed the demand it expects in autonomous mobility.

On Monday, Continental took media to its suburban Frankfurt research and development facility to show off its CUbE robo car.

The CUbE, standing for Continental Urban Mobility Experience, is a boxy automated vehicle developed in partnership with driverless shuttle maker EasyMile of France, in which it acquired a minority stake in July.

The CUbE has no driver, nor a steering wheel or brake pedal. A Continental engineer uses an app on his smartphone to summon the vehicle to a small group. The doors open and the group climbs inside. The only interaction necessary with the vehicle is to push a button on the inside of the car to close the doors.

Radar sensors and cameras feed the car’s ECU and identify pedestrians in the CUbE’s path, communicating with them via an exterior display as well as stopping for them. The vehicle, to which Continental soon will add LiDAR, also can recognize traffic lights, their position and switch phasing, it says. The CUbE also communicates with lights via a vehicle-to-infrastructure network.

“I don’t think vehicles of today will disappear from the market, but there is a demand in the market for alternative technology like robo cars,” Andree Hohm, head of Continental’s self-driving car project, tells media.

Continental predicts two-thirds more people will live in cities by 2050 than do today, making personal car ownership difficult due to crowding.

The former relies on sensors on the car; the latter relies on sensors on the car and in a garage, as well as maps, odometry and environmental and trajectory planning information to automatically park a car. In a demo here of the intelligent parking garage technology, a driverless Volkswagen pulls into a garage, seeks out a parking spot and backs in, albeit crookedly.

For both the CUbE and automated parking technology, Continental is eager to take vehicles off-site for testing to privately owned locations that are ripe for geo-fenced automated vehicles, such as theme parks and train stations.

Engineers peg the eventual cost to add sensors to public garages for the automated parking technology as a sliver of what it would cost to construct the garage, just €1 million to €2 million ($1.2 million to $2.4 million) in added costs.

At the supplier’s auto show presentation, Degenhart wears a virtual reality headset that is meant to be used in the cockpit of the future, to show virtual displays instead of physical ones. He also announces Continental has developed a 300-kWh electric powertrain. For comparison, the Chevy Bolt has a 60-kWh Li-ion battery pack.

Electrification is expected to blanket the market in the near future, especially in vehicles with autonomous driving capability. Many luxury manufacturers have announced plans to eliminate pure gasoline or diesel powertrains from the lineups, with hybrids, plug-in hybrids or battery-electrics to be the only choices of powertrain.

“We have to admit that the whole development toward electrification is picking up speed,” the CEO says. “And we are making adjustments to our planning scenarios every quarter or less to be able to keep up with the development in the market.”

Degenhart cites the 300-kWh powertrain, as well as Continental’s 48V technology, as examples it is ready for the coming industry push toward electrification.

“So I think we are well prepared,” he says, noting Continental is trying to stay agile in a changing market. “We have everything for the battery system, except the cells. On the cell side we are trying to keep our options open for the future.”

Degenhart says the supplier is not manufacturing cells on its own at the moment, noting lithium-ion cells are not “the breakthrough technology which is needed to help electrification to bring down costs and to get acceptance from the end consumers.”

In a statement, the chairman cites Li-ions as “too heavy, too large, too weak and too expensive.” Continental sees solid-state batteries as the solution to longer range and reduced costs, noting they are quicker to charge and should bring costs down to less than €100 per kilowatt hour vs. €200 ($84 to $168) per kilowatt hour today.

“This means that an electric vehicle with battery storage of 75 kilowatt hours would have a range of around 500 kilometers (311 miles) and cost around the same as a diesel vehicle to run,” Degenhart says. “This is decisive in terms of finding more acceptance for this technology among purchasers and users.”