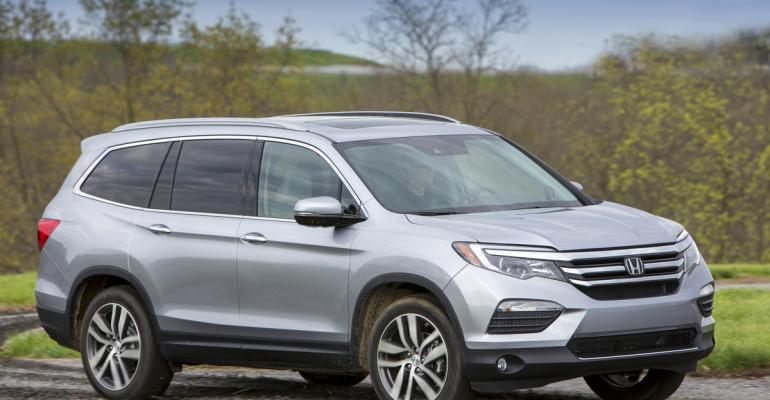 The strategy should allow customers to get into a Pilot at a lower price. For instance, Hyundai&rsquo;s 2-row Santa Fe begins $5,000 below its 3-row version.

In a further carving up of the CUV sector in the U.S., Honda next year will debut a short-wheelbase version of its Pilot large CUV, WardsAuto forecast partner AutoForecastSolutions learns.

The SWB Pilot, to have two rows of seating, is to begin production in September 2018 at Honda’s Lincoln, AL, plant.

The move is not without precedent in the industry, as competitor Hyundai already offers 2- and 3-row versions of its midsize CUV the Santa Fe.

The strategy allows buyers not needing a third row to get into the CUV at a lower price point.

It’s unclear how much size and price difference there would be between a SWB Pilot and Honda’s next-smallest CUV, the midsize 2-row CR-V. The CR-V starts at $24,045 for ’17.

Automakers are looking to grow their presence in the light-truck sector as sales of the vehicle type, specifically the CUV body style, boom and cars, traditionally the best-selling body style in the U.S., falter.

Pilot sales last year fell 11.3% to 120,772 units, which Honda has blamed on a tight supply situation at the Lincoln plant, also home to the in-demand Acura MDX.

AutoForecastSolutions sees the SWB Pilot also moving from Lincoln to East Liberty, but not until June 2021.