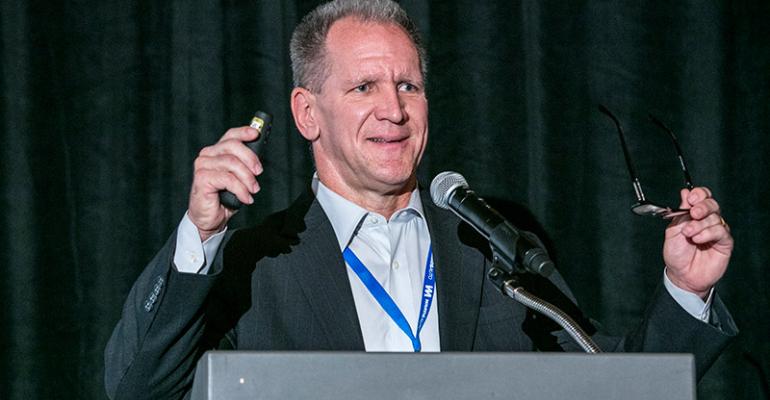 C-V2X, 5G&nbsp;and HDBaseT are just some of the technologies being targeted for speeding up and expanding data transfers between vehicles, infrastructure and the cloud.

NOVI, MI – There is much talk about how the connected car will change our lives, but what has to occur to bring it to fruition?

A lot, say panelists at a session on “turbocharging connectivity” at the 2017 WardsAuto User Experience Conference.

With lines of software code in the automobile expected to double or triple in the near future, from roughly 100 million lines today, it is easy to see why vehicles will have to have much more robust electrical architectures, as well as transmit information faster than 4G LTE allows.

“There’s an awful lot of ECUs in a car that gather information about performance and operation that need to be communicated in order to keep the efficiency of that vehicle the way it should be, and then be able to relay that information to other cars that may have the need for that information,” Scott Beutler, vice president-interior for Continental, says of future vehicle-to-vehicle and vehicle-to-infrastructure data transmission needs.

He says Continental is focused on a variety of ways to make this happen, including improving systems integration so systems work together, and making networks pass along data faster.

How the information is presented to the user – the human-machine interface – also will be key to the success of autonomous cars, which will focus on how to offer new entertainment options when drivers decide to relax and watch a movie while their car proceeds automatically to his or her favorite coffee shop.

But connectivity also will have a huge impact on the safety of vehicle occupants and those around them, panelists say.

“Connectivity is the linchpin that will make advancements to solve our fatality problem,” Beutler says, noting there are 1.3 million fatalities annually caused by auto accidents on the world’s roads.

Per an OpenSignal report last year, 4G LTE download speeds in the U.S. averaged 10 megabits per second. A megabit is 1 million bits of data; a gigabit is 1 billion bits.

In a 5G future, Beutler says vehicle line of sight will be improved, allowing automakers and suppliers to receive data from sensors from other vehicles and infrastructure within a 1.2-1.9-mile (2-to-3-km) range.

With C-V2X, Beutler says Continental sees start of production occurring in 2020 or 2021 and will enable scenarios such as telling the fifth car in a line of slow-moving traffic it is OK to pass safely, via sensor data that will be transmitted by the first car.

But sending and receiving data faster and faster over wireless networks isn’t the whole story of the connected car.

Paul Hedtke, a consultant and advisor to chip maker Valens of Israel, sees HDBaseT, the global connectivity standard in the A/V community, as a low-cost means of vastly speeding up connectivity within vehicles in addition to connectivity to the outside world.

Vehicles currently use complex internal electrical architectures comprising of many types of wires and cables to connect the various components of infotainment and advanced driver-assist systems, from multiple infotainment display screens to ADAS cameras and sensors.

But with the HDBaseT standard, one unshielded twisted-pair cable 50 ft. (15 m) in length, up to 6 gigabytes-per-second of video and data can be tunneled, or sent encrypted between routers, according to the HDBaseT Alliance, created in 2010 by Valens, LG, Samsung and Sony Pictures Entertainment. Hedtke says this compares to today’s peak data rates of 100 megabytes-per-second in “the most sophisticated electronic automobiles.”

That means high-speed data sent from cameras to ADAS systems will be transmitted with zero latency or lag, maximizing safety and reliability.

Plus, replacing a smorgasbord of slow, single-purpose cables with one simple cable to transmit vast amounts of data with lightning speed can radically simplify electrical systems and reduce weight, cost and complexity. “The concept here is ease of integration,” Hedtke says.

GENIVI, an alliance of 140-plus companies striving to bring about open-architecture technology to enable the connected car, this year began a smart-city pilot program in Las Vegas that aims to reduce pedestrian-car deaths in the city.

“Unfortunately Las Vegas had the dubious distinction of having the second-most per-capita vehicle-to-pedestrian fatalities in the U.S. last year,” says Kyle Walworth, chairman of the GENIVI Alliance.

GENIVI hopes its fleet of city-owned vehicles, with GENIVI’s embedded code communicating with city servers also running GENIVI code, will be able to lessen the number of pedestrian deaths caused by automobiles.

With Walworth noting more than half of the deaths occur in areas away from crosswalks, GENIVI says speed and vehicle-location information is being communicated and combined with the location of crosswalks and buses to warn drivers of impending high-risk areas for pedestrians, such as bus stops where unloading and loading of passengers is occurring.

The location of traffic jams, where pedestrians may be walking around stopped vehicles, also is being monitored and sent to drivers, who get a pop-up warning in their vehicles with “actionable insights,” Walworth says.

Success will come if the warnings prompt drivers, who will be interviewed and surveyed at the end of the pilot program, to slow down, and if Las Vegas city planners make changes in the infrastructure, such as updating signage and crosswalks.

The GENIVI fleet, which initially comprised four vehicles, has another 20 launching now and another 50 after that, for an eventual grand total of 100. Results of the smart-city pilot will be presented at January’s 2018 CES in Las Vegas.