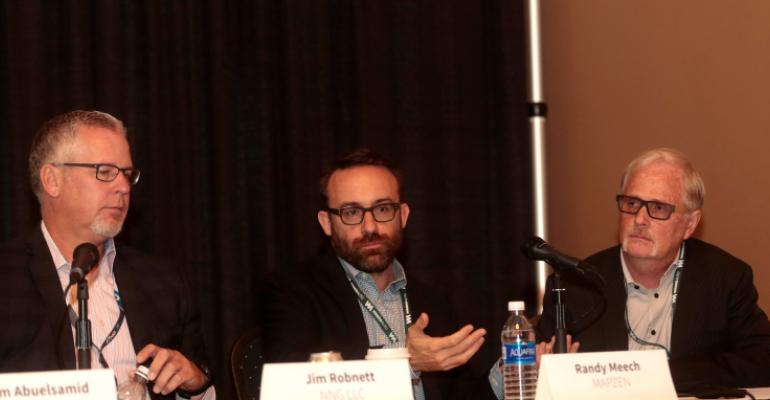 Mapping the Future of Navigation

Three panelists offer divergent points of view on how we&rsquo;ll navigate in the future, but all agree that map data and how we use it will play a key role in our vehicles for years to come.

NOVI, MI – While navigation and mapping have come a long way since stars and landmarks provided our guideposts, today’s technology still has a ways to go before it becomes as simple and intuitive in automotive applications.

Abuelsamid notes the skies – and the satellites orbiting there – still play a major role in navigation. But there is significant variety in how that information is translated into today’s vehicles, whether through in-car mapping and navigation, through projected mobile phone-based applications or directly through a driver’s mobile device.

Robnett, who brings a more traditional viewpoint based on his firm’s work with OEMs, says in-car mapping has inherent advantages over mobile-phone navigation, which can suffer from reception problems. Future cell phones may not offer the same level of focused functionality and up-to-date information as built-in maps that receive cloud-based updates, he adds.

Cellphone-level connectivity, natural language voice control and predictive systems will add to the capability and rewrite the current model through which OEMs sell subscription services or drivers use mobile phones, he says. As costs have declined and OEMs have learned to price and package navigation for entry-level buyers, NNG predicts take rates will continue to grow for the next 5 to 7 years.

Crucially, however, in-car mapping using common source data is the only way to support autonomous vehicles of the future, Robnett says.

Meech expects solutions will come through open-sourcing, akin to a public-utility model for mapping, enabling developers to work with common map databases to create new systems capable of meeting navigational needs now and in an autonomous future.

Meech sees problems with using proprietary mapping databases controlled by a few large entities. That system won’t work, for instance, if a self-driving Uber car runs out of real estate on its proprietary map and has to drop the passenger off short of his or her destination.

“It would be much better if data sets were shared,” says Meech, who forecasts the big mapping players will go the way of printed and bound encyclopedias being replaced by Wikipedia.

Car companies are in a great position to help solve the mapping issues by using open-source maps in developing their in-car systems, he adds.

Today’s navigational aids can be easy to use, Palmer says, but have limitations that force users into negotiating with technology in ways they’d prefer not. And while maps and navigation systems are a boon to travelers, they also can leave one unaware of their location or unable to find their way should the system fail.

In the short term, Palmer says, the in-car systems will become as easy to use as mobile phones but without the cell-signal limitations, while in the future car-to-car, car-to-infrastructure and car-to-pedestrians will be major enablers. Keeping the driver informed, minimizing unnecessary information and allowing quick transfer of control between car and driver are key.

“It’s going to change the way we do things, and mostly for the good,” Palmer says.

Change will come, Robnett agrees, but OEMs still will want equipment appropriate to their brands, and they’ll require extensive testing before allowing “minimally viable” products into the marketplace.

Palmer insists regardless of development efforts, driving remains the primary task with everything else secondary.

And Meech says he looks forward to the day when open-source mapping paves the way for creative people to develop their ideas.

“What’s the next big thing after Waze?” he says of the crowd-sourced navigation app.