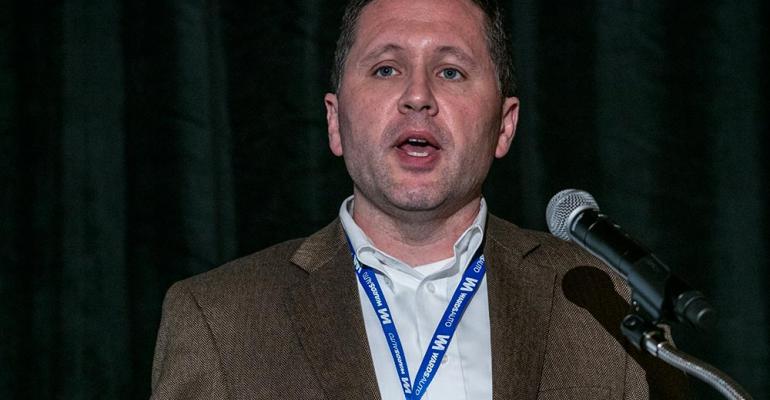 Android Auto and Apple CarPlay aren&rsquo;t as easy to use as some car buyers may think, embedded-navigation-system suppliers say.

NOVI, MI – It may seem like the flurry of vehicles getting Android Auto and/or Apple CarPlay integration quickly will make embedded navigation systems obsolete.

But panelists representing some embedded navigation-system suppliers defend their products, telling the crowd at the 2017 WardsAuto User Experience conference to not believe the hype.

“Many people thought CarPlay and Android Auto would mean the end, or at least the contraction, of in-dash navigation, (but) I haven’t seen any OEMs back off from plans to do in-vehicle navigation…we still see this as a growing segment and one we continue to invest in,” says Kip Dondlinger, product manager and user experience manager-Garmin.

He cites several issues with relying on Android Auto and Apple Carplay for navigation, including the still-patchy availability of 4G LTE WiFi in vehicles, as well as smartphones with operating systems that are incompatible. Buying cables and connectors every time a driver gets a new phone, a new car, or both, also is a pain point, he says.

“There’ve been challenges because of the huge difference in the product cycle between the automotive industry and the smartphone industry,” Dondlinger says of the incompatible lifecycles of vehicles (four to 10 years) and smartphones (one to two years). “This only gets worse over time because backwards compatibility gets broken every time,” he says of being unable to pair a phone to an older in-vehicle operating system.

Tom Denton, director of engineer for white-label navigation supplier NNG, sees automated vehicles as saving the day. Navigation will have to be embedded, he reasons, because self-driving vehicles will rely on robust mapping to get around, sometimes regardless of a human driver.

“Every vehicle should have navigation,” Denton tells the crowd, noting the cost is coming down significantly and now vehicles as inexpensive as the Renault Dacia, $14,000-$17,500 (€12,000- €15,000) have it. Renault is seeing an 80% take rate for the optional navigation system in the youth-focused car, supplied by NNG, which Denton says surprised the supplier and shows buyers “trust the car more than they trust the phone.”

However, panelists agree the poor reviews of navigation/infotainment systems among vehicle buyers is deserved, as they say automakers often crammed them with features first and thought of ease-of-usability and interface design second, if at all.

“What I’m very impressed by is the appetite and understanding (from OEMs) that they’re behind,” says Lonnie Arima, head of Auto OEM business at Magellan. “I think the things we’re trying to do as an industry are headed in the right direction…we’re in the beginning stages of a nine-inning game,” he says.

Adds Dondlinger: “There’s been very little thought put into human-centered design,” noting many apps have been added that are merely “bullet points on a features’ list.”

Of navigation-software creation, NNG’s Denton says his company and OEMs are working more closely than ever as OEMs realize the errors of their past ways.

“The OEMs let the phones onto the dash, because it was a superior technology. Now they’re realizing they have to catch up,” he says.

With many people who have in-car navigation admitting to using it infrequently, Dondlinger says Garmin is working on raising usability rates.

The supplier, which is a navigation software and hardware supplier for the auto industry, as well as the aviation and marine industries, has a product integrating what it says is more useful weather data than the forecasts and low-resolution radar currently available in vehicles.

Integrating real-time weather into drive routes, on a “minute-by-minute, mile-by-mile” basis, will allow drivers to see hail or any other condition they’d rather avoid.

Garmin also is looking to integrate navigation with more robust parking data, with Dondlinger noting setting a route usually brings someone to a main entrance of a building, rather than a place to put their vehicle.

The supplier will show navigation with more useful weather and parking data at the 2018 CES in Las Vegas in January. However, it is available now, with a predicted two-to-three (2- to 3-year?) introduction  timeline based on how quickly OEMs have integrated new infotainment technology in the past.

Trying to bolster usability of navigation is something Magellan is focusing on, too, Arima says. One way it is trying to do that is through dash-cam integration. The supplier sees dash cams as a growing business, noting the U.S. is far behind countries such as Russia where the products are commonplace. While they are used there for anti-corruption reasons – getting video of someone who may jump in front of a car for insurance purposes – Magellan wants to popularize them in the U.S. as a tool for employers to keep track of delivery trucks, or parents to monitor their teenage drivers.

“Magellan is making a big investment into dash cams and into videos…We think navigation (can be enhanced) by adding more video,” he says, predicting 20 cameras will be on vehicles in the future, compared to just a backup camera commonplace today.