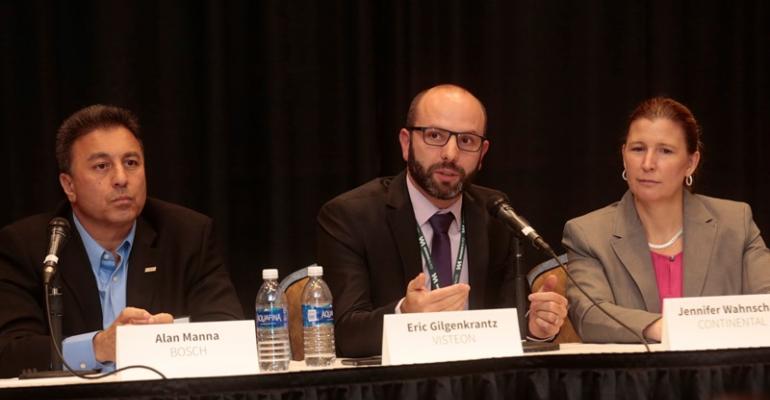 Projecting icons generated by advanced safety systems on the windshield is seen as a way to create safer driving.

NOVI, MI – Head-up displays have yet to infiltrate mass-market vehicles, but suppliers already are focused on a future beyond the relatively simple HUDs of today.

“We will enter the augmented-reality area in the near future,” Eric Gilgenkrantz, senior manager-mechanical, display & optics for Visteon, tells attendees at the 2016 WardsAuto User Experience Conference here. He says Visteon will have an AR HUD in market before 2020.

“The transition to head-up display will be that we transition from information below your line of sight into direct driver vision, overlaying the reality and the information, which will further enhance the experience and improve safety to take the best out of the ADAS system in real-time,” Gilgenkrantz says.

Speaking in a session on HUD and displays, he notes the inclusion into HUDs of ADAS functions such as lane-departure warning, adaptive cruise controls and navigation will generate what he says are faster, reliable driver decisions that should improve safety behind the wheel.

With AR HUD, a driver’s navigation route would be overlaid on the road ahead, as would icons for lane lines and the distance between the driver’s car and the car ahead. A combination of sensors, cameras, GPS positioning, data analysis, data processing and data fusion will make it all possible.

Visteon is working on two optical concepts at the moment: a single-image AR HUD with a fixed virtual image distance beyond 33 ft. (10 m), vs. the nearer types of conventional HUDs, and, in a consortium with labs and an OEM, a dual-image AR HUD with variable projection distance.

“So the bottom of the image will be closer and the top of the image will be further away, and this is reducing the parallax effect (the difference in perceived object position along differing lines of sight) and then you don’t in that case need an eye-tracking system,” Gilgenkrantz says, adding this type of AR HUD could allow for the removal of the instrument cluster.

Jennifer Wahnschaff, head of instrumentation and driver HMI for Continental in the Americas, says the supplier wants to influence drivers to keep their eyes on the road and their hands on the wheel, rather than looking down or to the side.

An AR HUD is a way to do this. “It supports the driver if there’s danger in front of them, it supports the active usage of ACC and…it helps to avoid the level of confusion you have, especially if you’re driving in a new area,” she says.

As with Visteon’s AR-HUD concepts, the Conti system overlays the road with icons showing not only lane lines and distance between cars but also multiple, changing lane-guidance arrows showing the direction needed to travel to stay on a mapped route.

Arrows change from pointing straight to pointing right to indicate an exit in a video Wahnschaff plays for the audience.

For Wahnschaff, who often drives in Germany, the arrows help her “know that the direction I’m taking is actually the turn I need to make and not further up the road or a little bit behind.”

Next year Continental will be launching not an AR-HUD system, but a predecessor technology using digital light processing, a projection system using multiple small mirrors to create bright, clear images no matter if it is a sunny or cloudy day.

The cost of HUD certainly is a concern, both to car buyers and automakers. To combat this, Bosch offers a less-expensive HUD called a combiner for use in non-luxury vehicles. Unlike a traditional HUD seen in premium models, which project images and icons onto the windshield, the combiner HUD, available on current Mini Coopers, displays info on a small plastic screen. This results in packaging efficiencies as well as cost efficiencies, says Alan Manna, Bosch regional president for car multimedia.

Outside of HUD, other displays show promise for improving driver safety and vehicle interaction.

At this year’s CES in Las Vegas, Bosch showed off its neoSense haptic feedback HMI technology, which uses vibration to mimic textures and allow users to feel virtual buttons on a screen. Manna says this also will help keep driver’s eyes on the road rather than looking down at a screen, similar to how hard buttons function now.