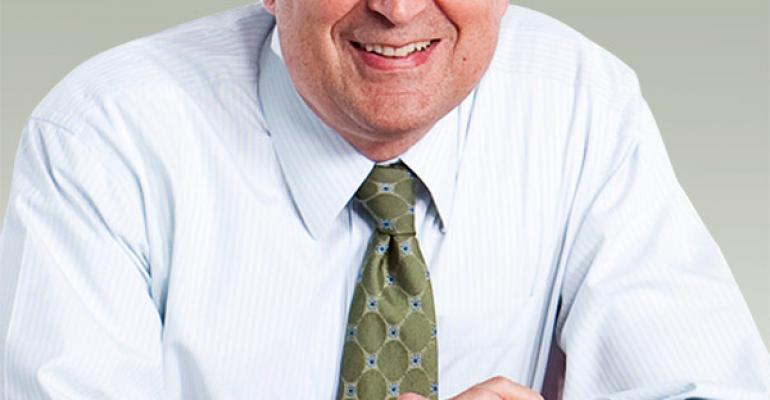 He ticked off warning signs that a “serious recession” could be coming. Among them were 2007 fourth-quarter declines in Group 1’s California operations due to subprime lending issues and housing-market declines.

That talk was in February 2008, before the economy slid into the worst economic crisis since the Great Depression. The next year, Chrysler and General Motors would enter bankruptcy. Dealerships closed nationwide.

“Some called him ‘Dr. Doom,’ but he nailed it,” Hesterberg says. “Credit was drying up and housing loans were defaulting. He dug in deeper and saw these alarming trends. He said enough that we were concerned.”

Because of quick actions, Group 1 had “a strong balance sheet and solid performance at the dealership level” when the recession abated, DeLongchamps says.

Bad as they were, the hard times “made everyone in the industry better businesspeople,” he says. “They had to do things they had not done before.”

Hesterberg is a former Ford executive who was considered a sales whiz when he joined Group 1 as CEO in 2005. He replaced the company’s retiring CEO, Ben Hollingsworth, who started out consolidating funeral homes, then turned to auto dealerships.

At the helm, Hesterberg patiently began transforming the company into a more centralized money-making model.

Group 1 is No.5 on the WardsAuto Megadealer 100 this year. The nearly 10,000-employee group has 142 dealerships, 182 franchises and 36 collision centers in the U.S. and U.K., representing 35 brands. This year, it has entered the Brazilian market.

By the end of 2012, Group 1 Automotive reported a record profit, driven partly by a substantial increase in Japanese-brand sales. Overall group revenues totaled $7.5 billion and gross profits stood at $1.1 billion.

Group 1’s sales and revenue this year are on course to set records, and the company is gaining market share, DeLongchamps says.

Expansion has been Group 1’s blueprint. In 2011 and 2012, the company acquired more dealerships than all other publicly owned dealership groups, adding nearly $1.3 billion in revenues to its bottom line, he says. “Business is coming back. Pent-up demand is very real.”

To take advantage of the sales rebound, Group 1 has been on a tear.

“Of late we’ve added domestics, which have picked up steam in the last few years,” Hesterberg says.

It expanded its overseas portfolio in February when it acquired four Ford dealerships near London, England. They are expected to generate $177 million in annual revenues, Hesterberg says.

Also that month, Group 1 closed a deal with Brazil’s UAB Motors Participacoes, a group of 18 stores in what the megadealer sees as a growth market.

“Auto sales have been recovering quite a bit here,” Hesterberg says, pointing to various economic indicators in predicting 2013 industrywide deliveries of about 15.6 million units.

Hesterberg has seen his share of challenges since moving to Group 1 after leaving Ford where he served as group vice president-North America marketing, sales and service.

At Group 1, he found a highly decentralized operation. “There was no good real-time information. It was a good company but without synergy and effective communications,” he says.

Eight months after he joined, Hesterberg brought in Rickel, a dead-on forecaster who had worked in Ford’s planning and forecasting group. “He has a big-picture view,” Hesterberg says.

Why leave a top job at Ford to join the dealer ranks? Hesterberg saw it as a chance to run a public company and readily see the fruits of his labors.

“It’s been quite rewarding,” he says. “Group 1 is not a small company. But you can accomplish things here more quickly.”

Hesterberg began his Ford career in 1975, interrupted by 16 years at Nissan in U.S. and European posts. He also worked at Gulf States Toyota Distributors, the world’s second-largest Toyota distributorship.

Does Hesterberg ultimately want his enterprise to be the nation’s No.1 dealer group, as its name implies?

Not really. “After my 38 years in the business, being biggest is not a very worthy goal,” he says. “Our job is to provide a fair return for our shareholders and represent our manufacturer partners professionally.”

Despite Group 1’s success, Hesterberg has nagging concerns, such as narrowing profits on car sales.

“There’s significant market erosion in new-vehicle margins,” he says. “It’s been going on for quite some time now. It’s the biggest issue in our industry. You see it more in the U.S., and less in the U.K.”

Still, Hesterberg remains forward-looking. Given the improving market conditions, he sees opportunities to grow all areas of the business. That’s a goal he thinks he and his seasoned managers can hit.